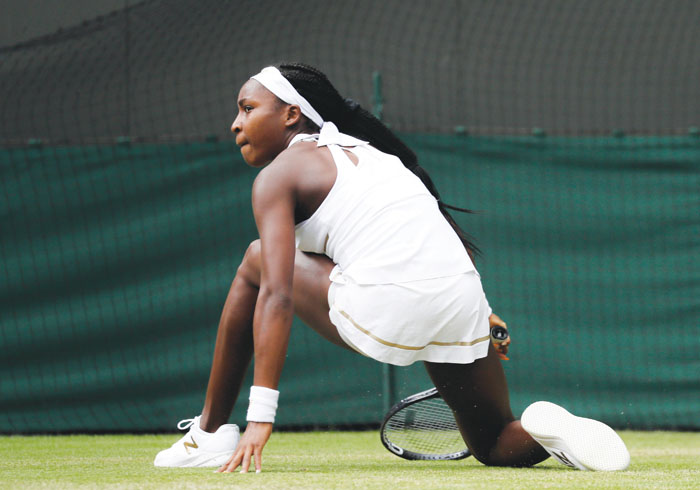 WIMBLEDON, England (AP) — Out of escapes, out of surprises, Coco Gauff knew her captivating Wimbledon ride at age 15 was nearing its conclusion.

The thousands of spectators at Court No. 1 on Monday realized it, too, so they made sure to show their appreciation for the youngest qualifier at the All England Club in the professional era and youngest Week 2 participant since 1991.

Fans, most of whom probably hadn’t heard of Gauff until last week, rose and roared as she fended off the initial two match points she faced against 2018 French Open champion Simona Halep. It was reminiscent of the way the Gauff began a comeback victory in her previous match. This time, though, Gauff could not come through, beaten by the older, more experienced Halep 6-3, 6-3.

“It was really surprising, because you don’t really expect this kind of support when you’re in another country, not your home country. I really did feel like I was probably playing in New York. I’m just really happy that people believe in me,” said Gauff, who beat Venus Williams in the first round for quite a Grand Slam tournament debut.

“I wasn’t feeling my best, I wasn’t playing my best,” Gauff said as she wiped away tears at her news conference, where she noted she wasn’t sure why she needed a visit from a doctor in the second set, “but they were still supporting me, no matter what.”

“Right now, Ash is playing well,” Riske said. “I believe that I am, as well.”

She improved to 14-1 on grass courts this season and reached the first major quarterfinal of her career in 30 appearances.

It’ll come against yet another player who has topped the WTA rankings, Serena Williams, who will be participating in her 14th quarterfinal at Wimbledon alone.

Barty began perfectly, winning the first game of the match this way: 112 mph ace, 102 mph ace, 110 mph ace, 108 mph ace. She hit another pair of aces in her next service game and finished with 12. But Riske simply played so cleanly, delivering twice as many winners as unforced errors, 30-15, and won her fourth consecutive three-setter in the tournament.

“There aren’t many holes in her game, full-stop,” said Barty, who followed up her first Grand Slam championship at Roland Garros last month by grabbing a title at a grass-court tuneup tournament.

“Today wasn’t my day. I didn’t win a tennis match; it’s not the end of the world,” she said. “It’s disappointing right now. Give me an hour or so, we’ll be all good. The sun’s still going to come up tomorrow.”

The men’s quarterfinals Wednesday are No. 1 Novak Djokovic vs. No. 21 David Goffin, No. 2 Roger Federer vs. No. 8 Kei Nishikori, No. 3 Rafael Nadal against 65th-ranked Sam Querrey, and No. 23 Roberto Bautista Agut against No. 26 Guido Pella.

Djokovic, Federer and Nadal all won in straight sets and are all in the quarters of a major tournament for the 24th time; one member of the Big Three won the title at 20 of those.

For Gauff, this was her seventh match in short order — three in qualifying, four in the main draw — and while she insisted she wasn’t fatigued, she looked it.

Still, with serves reaching 119 mph, a dynamic backhand that landed near lines and aggressive volleying, Gauff made an impression on anyone who watched her.

“It’s a great performance. I think if she keeps going, she will be (in the) top 10 soon,” Halep said. “She will be a very tough opponent for everybody. If she keeps doing what she did here, she’s going to get a lot of confidence and she can win big tournaments soon.”

Gauff is, after all, too young to drive a car. She is taking high school courses. Instead of hanging out at a mall or going to see a movie with friends or working as a camp counselor Monday, there she was at Wimbledon at 1 p.m., standing in the tunnel that leads to the court with her father, Corey.

He draped his arm around her shoulders, then parted ways by giving his daughter a peck on the cheek.

Serena Williams has been fined $10,000 by the All England Club for damaging a court during practice before the Wimbledon tournament started.

Fabio Fognini was fined $3,000. The Italian said during his third-round loss that he wished a bomb would hit Wimbledon.