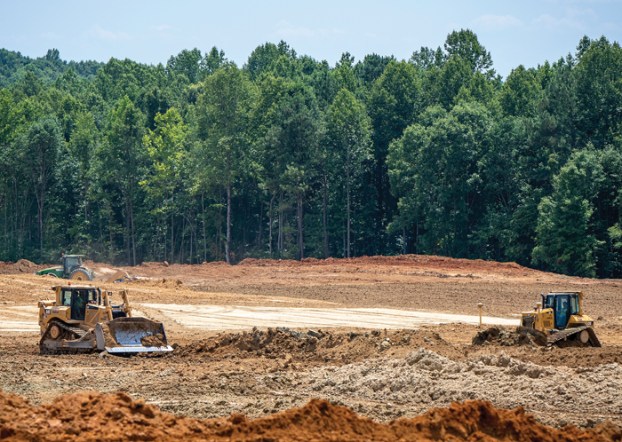 The Chewy.com project was announced in late April and is expected to bring more than 1,200 jobs to Rowan County by 2025 at the distribution plant on Long Ferry Road. The plant will be a $55 million investment.

Since the announcement, county officials and staff have been working to help the project come to fruition. On Monday, the county commissioners approved waiving fees for 24-hour fast-track permitting for the Chewy.com facility and gave Chandler Concrete a temporary use permit for a concrete batch plant to serve the site.

Currently, there’s “lots of dirt” being moved at the Chewy.com site, Crider said. It’s 480,000 cubic yards of dirt resulting from ongoing mass grading, to be exact, said Caleb Moore, who is project manager for NorthPoint Development, the company constructing the fulfillment center.

All necessary zoning permits have been issued, said Ed Muire, director of the Rowan County Planning and Development Department.

And, Moore said NorthPoint has a foundation permit as of Wednesday. NorthPoint will be laying the foundation within a few weeks, he said.

Still, Moore said the rest of the building plans need to be completed. The designs will be a copy of a Chewy.com distribution plant in the Dayton, Ohio, area, he said.

Plans for mechanical, electrical, plumbing and fire protection systems also need to be finished, he said.

Meanwhile, there’s still paperwork for a grant that would pay for extending a sewer line to the site.

In May, the Rowan County commissioners unanimously approved an application for $1.5 million in Community Block Development Grant funds to extend a sewer line to the Chewy.com site. The sewer line will be the first to extend under Interstate 85 along Long Ferry Road.

Grants have been “earmarked,” said Scott Shelton, vice president of Rowan County EDC. The next steps include getting paperwork processed for the formal application, Shelton said.

The aim is to have the application approved in mid-August, he said.

After that, Salisbury-Rowan Utilities will find a bidder for the sewer line work, Shelton said.

Crider added that the EDC will be advocating for job training programs at Rowan-Cabarrus Community College. The programs will provide students with the necessary skills — such as proper use of distribution-plant equipment – to work at the Chewy.com plant, he said.

The company had planned to have a groundbreaking on May 2 but will have a ribbon-cutting next spring instead, Shelton said. The groundbreaking was scrapped because of scheduling, he said.

The project is on schedule, Moore said, and NorthPoint is looking forward to getting started on construction. Moore said that the plant should be completed in the first quarter of 2020.

The facility should be open in June 2020, Crider said.

SALISBURY — During Monday’s Rowan County commissioners meeting and in a period of transition for the agency, the commissioners voted... read more