David Freeze: No free internet for travelers on the Cassiar Highway 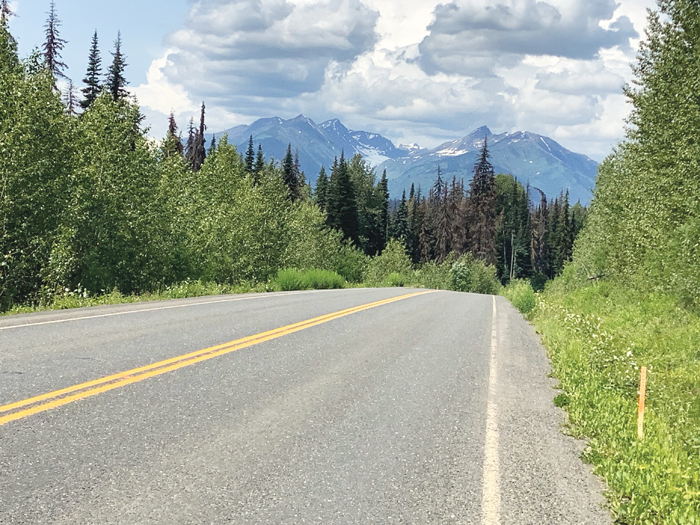 An incredible view of the road ahead. David Freeze/For the Salisbury Post

When I was done with my stay at the worker camp in Meziadin Junction, British Columbia, I waited to try to fix connectivity issues. I was still getting through but not the way I want to.

I had been told that a restaurant opens at 5:30 a.m., but I found it was only for company workers. I couldn’t order anything until 7 a.m., and that was too late. The woman in charge told me I could buy off a rack of prepared stuff.

So quickly, I bought eight snacks that included carrot cake, cherry yum-yum and scones. Those snacks saved the day. They were all I had until about 4 p.m.

Finally getting started, I read a sign on the road that said, “Uphill for the next 20 kilometers.” There was nothing worse to read. I imagined a terrible morning.

About 15 minutes out, I saw my first black bear of the day. He leaped into a tree. Past him, I realized mosquitoes and flies were active. With the uphill and slow going, I couldn’t get away from them.

Also, there was bear scat everywhere and I expected lots of sightings. Averaging just 5 mph during that uphill period, I could see a long and dreadful day ahead.

The biggest matter of the morning was that I had to go about 55 miles to Bell II, a wilderness resort on the Cassiar Highway. At the time, all I knew was that it had a convenience store.

On this whole Cassiar Highway, there are only a handful of supply stops. It was tough plugging along, up and down, and never making good time.

I was excited to see a rest area just before Bell II and quickly struck up a conversation with a woman on the way to tour Alaska by herself in her truck.

She wanted to camp at some of the legal, free places and had made note of them. I didn’t care if was free, I just wanted a good place near the end of my day.

I stopped at Bell II — named because it specializes in heli-skiing, when a person jumps out of a helicopter to ski down a mountain. A large water was $4.45,  but it was all I could get. The water and some more snacks had to last tonight (Thursday, June 27) and most of the day Friday (June 28).

I asked the clerk, who seemed pretty snotty, if I could use the internet. She laughed and said, “I can’t give out free Wi-Fi to anybody.” Nor a good price on water, I suppose.

I got back on the road and started making good time, ending at 87 miles and the Bob Quinn Rest Area. I would be stealth camping not far from there.

Remember the mosquitoes? Well, they were out with a vengeance all afternoon. I have never seen them so bad as they were at at Bell II. If not for those pesky varmints, I would be out looking at the snow-capped peaks all around me. They got me a couple of hundred times.

I saw four more black bears Thursday, and the beautiful scenery on the Cassiar Highway really ramped up. The climbing was as bad as I have seen. I met Julie and Brian Harrell, of Fort St. John, British Columbia, in the morning. Brian said the highway is only a logging road that has been paved over. Most of the time, it feels that way.

It is time to sleep some, but there is still light out and so are the mosquitoes. They are waiting for me to come out. I dread that battle.

Friday would bring another long challenge to make miles, and I am excited to meet people at an Indian village that has snacks.