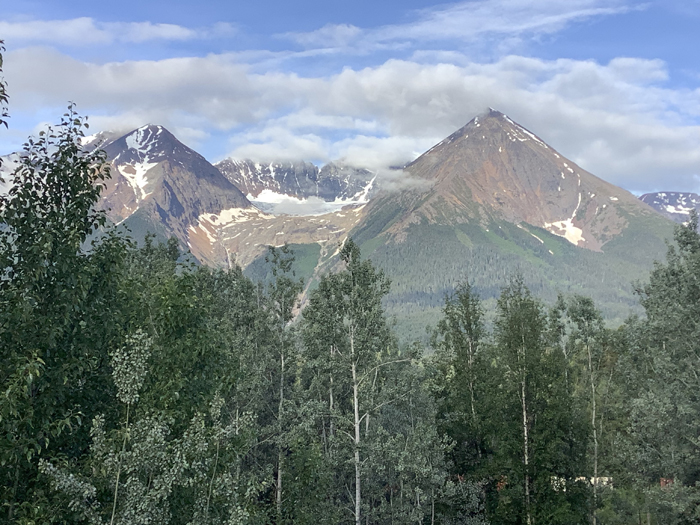 When I pedaled into Kitwanga, Canada, on June 25, I had to hurry to get groceries. Those groceries sustained a long evening and an even longer day.

I finished June 26 with almost nothing left, but I was good on water. It seemed like it would be a long day. So much happened that I’m surprised it worked so well.

My cellphone has no service and probably won’t for a few more days — the rest of the time on the Cassiar Highway. So in last Wednesday morning in the tent, I couldn’t figure out exactly what time it was and got up at first light and started packing. The mosquitoes were miserable, but the temperature was in the low 40s. There was no wind, and the mosquitoes were hard after me.

A dog in the campground kept growling and barking, making me wonder if a bear was in the area. I was gone before 5:45 a.m. It was broad daylight by then.

The first 8 to 10 miles were very slow, mostly uphill and not much to see, including almost no traffic. I was wide-eyed, looking for bear. It didn’t take long to see a cub just lying in the grass. British Columbia 37 was not scenic at all, so I just looked for bears.

One walked across the road, about a quarter mile ahead of me. He was hidden when I got there. Then came two close sightings, both within 30 to 40 feet. And they ran when they saw me. These were all black bears, and the last one was the largest.

On the most boring ride, the creatures gave me a fit. In the morning, any stop brought mosquitoes. After the wind picked up, it was flies. All afternoon, flies of several types just kept making bombing runs. They never bit me though but were plenty irritating.

About 4 p.m., a thunderstorm hit from behind. It ended at about the time another, huge one with plenty of lightning came from the front. For about two hours, a cold rain pummeled me, some of it very heavy. I was freezing and saw a bright spot in the sky, but it was just a small one.

I prayed to ask for that lighter spot to become bright sun. That prayer worked, and I began to warm up almost immediately.

I neared the community of Meziadin Junction, unsure of what to do. I had planned to camp again, but the biting flies were out as I found a convenience store. I saw a sign for lodging and inquired at the store. To be honest, I hate those flies and also needed to warm up.

After 96 long miles, I spent the night in a residential work camp. There are dozens of workers who live here instead of going home each night. Some of that is because of distance.

It is similar to a college dorm, except you have your own room while sharing bathrooms. Many of the workers live in something similar to the mobile classrooms at schools in our area.

Everything is small, but there was room for my bike, and I had the heat going. The rate was good too.

No matter what, it would be better than my best option for the night of June 27.

I have to keep pushing north and can’t waste any days.

The next supply point is about 64 miles away, but that is too early to stop for the day. Anything farther can’t be reached in a day, so here is my solution: I will go to that first supply point, load up again and go spend the night camping somewhere farther along after I get tired of riding.

I will be out there by myself probably, but that is OK. I still have 1,300 miles to go to Anchorage and 16 days to get there. I need a big day on the road.

I hoped the storms had passed and that I could haul enough food for Thursday night and at least half of Friday. If so, I will be on track to stay on schedule through the Cassiar Highway.

Sponsors, in addition to those previously mentioned, are Skinny Wheels, Eric Phillips and Gear for Races with Luis Villareal.