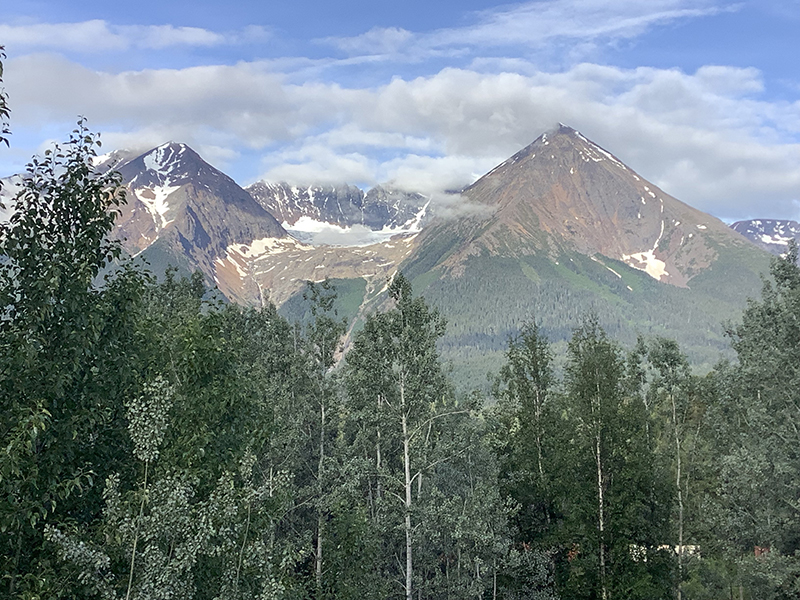 After about four hours of sleep, I had to get going on Tuesday, June 25, but was not really sure just what to do with the day.

My plan was to push out of Smithers, Canada, and go find out how to attack the Cassiar Highway. To do that, I had to pedal to Hazelton and New Hazelton and go to the visitors center. I had some information but wanted more.

First thing, I rode back into Smithers and got some snacks at the 7-Eleven store, with the clerk saying he wished he could ride a bike like this sometime. I hope he can too.

Headed north and still on Canada 16, I found the riding mildly challenging and was not making good time.

I spotted one of the wonderful rest areas that British Columbia has, with this one placed expertly in view of the Buckley Glacier. The sight was wonderful and made even better when I realized that the restroom had free wireless internet.

I could have taken the picture and sent it to the Post right then.

Back on the road, I noticed other snow-topped mountains too and some spectacular ones that weren’t covered with snow. The scenery was great, but the riding was getting more challenging.

I stopped at Moricetown, an Indian reserve with a nice convenience store specializing in handmade Indian items. I got three blueberry muffins. I was intrigued by an old baseball field with wooden walls and bleachers. There were also two totem poles.

All the people seemed happy, and the muffins were only $4.50, a good deal.

Then there was nothing until I got to the towns of Hazelton and New Hazelton. They are side by side but make a wonderful little community with Canada 16 as the main street. I found the visitors center. Kimmi Fuller and Taylor Barr gave me all the information I needed, and I left with a real plan. I went back into the little town and loaded my bags.

Kimmi and Taylor said to go on into the town of Kitwanga and grab some food at the grocery store there and check in at the campground. Then I would be set for close to 100 miles on Wednesday. That’s the distance to the next supply point and Mezladin Junction. I followed their instructions and arrived in town to find that store closed in 10 minutes. I was still three miles away.

I made a call to the store and asked the employees to wait. I needed enough food for Tuesday night, in the morning and all day day Wednesday.

Luckily, they waited and I bought $32 worth of food. Good thing, because the store would not reopen till 9 a.m. Wednesday, way too late. I had to be on the road early.

But I need to back up a bit. On the rush to get to the store, I was stopped by a school bus driver and told to watch out for a bear and her two cubs near the road. I saw them, all three. And they saw me, but I just got a picture and rode on.

The funny thing is that I was at the top of a long hill and could have really flown to get away, but there was no need.

I stayed in the Cassiar RV Park last Tuesday night in Kitwanga. It has just rained, so I planned to sleep in the gazebo and not put up the tent to save time in the morning.

The challenge of riding this highway alone could be very interesting. I didn’t buy bear spray. One, it costs $50. and, two, because the older residents say I won’t need it. We will know in four to five days.

The Cassiar Highway is about 450 miles long. So if I make the required mileage, I will have a report — unless the bears get me.