World Cup: France is hardly an underdog against the USA today 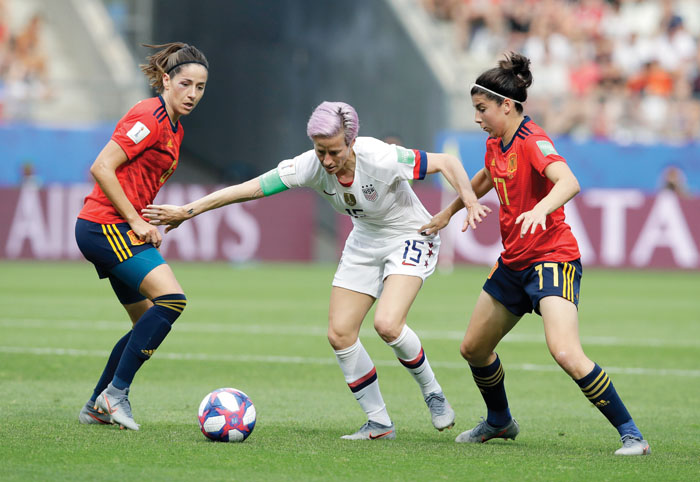 AP Photo/Alessandra Tarantino ... United States’Megan Rapinoe, middle, is challenged by Spain’s Vicky Losada, left, and her teammate Lucia Garcia during the Women’s World Cup round of 16 soccer match between Spain and US at the Stade Auguste-Delaune in Reims, France, Monday. The U.S. team won, 2-1, and plays host France today.

PARIS (AP) — The United States has its ranking and its trophies, and that’s all the motivation France needs.

The Americans face the French on Friday night at the Women’s World Cup, a match that’s been described as a final in the quarterfinals. It really has it all: The defending champions against the upstart hosts. The City of Lights. A sellout crowd.

“They’ve got a great trophy cabinet and we still have everything to prove,” French captain Amandine Henry said.

The only downside? The country is in the midst of a heat wave and temperatures are expected to soar into the 90s, although a 9 p.m. local time start should bring some cooling.

Les Bleues, ranked No. 4 in the world, finished atop its group before overcoming a determined challenge from Brazil on Sunday night to reach the quarterfinals.

France also reached the quarterfinals at the 2015 World Cup in Canada but fell to Germany on penalties after a 1-1 draw. The team’s best finish at the tournament was fourth in 2011 after losing 2-1 in the third-place match to Sweden. France had lost 3-1 in the semifinals to the Americans.

But France has seen its profile rise considerably in recent years, coinciding with the growth of its domestic professional league. Seven players on France’s roster play for Lyon, which routed Barcelona 4-1 to win the women’s Champions League for the fourth straight year and sixth time overall.

“From where we were four years ago, and where France was four years ago, I think both of us are much stronger teams. I think just the women’s game in general has grown tremendously,” U.S. star Megan Rapinoe said. “I guess the task for each team is to be the team that is growing as fast as the game is, keeping up on that and even being the one that is pushing the game forward.”

France is seeking to become the first nation to simultaneously hold the men’s and women’s World Cup trophies. The men won last year in Russia.

The United States already has three World Cup trophies, most of any nation. The Americans emphatically beat Japan 5-2 to win in Canada, highlighted by Carli Lloyd’s hat trick.

Vying for a fourth title in France, the United States faced a physical knockout-round opener against Spain.

Rapinoe scored on a pair of penalty kicks for the 2-1 victory in Reims on Monday night, although the game-winner in the 75th minute was the result of what many thought was at best minimal contact between Spain’s Virginia Torrecilla and Rose Lavelle. The foul was confirmed after video review.

“Yes, they do have some shortcomings, but so does every team in this tournament,” French coach Corinne Diacre said. “Spain played very well indeed. But we know the United States will be difficult opposition.”

Until Jennifer Hermoso scored for Spain, the United States had not conceded a goal in eight straight competitive matches dating to the 2016 Olympics, outscoring opponents 44-0. It was the first goal the United States had allowed this year since a 5-3 win over Australia in an April friendly.

The Americans have played the French 23 times, with France winning just three. But the last three matches have tilted toward France, with two wins and a draw. The last meeting was a friendly in January, when Kadidiatou Diani — who wasn’t named to France’s World Cup roster — scored twice in a 3-1 victory.

“It’s impossible to have any pressure. Quite the opposite, in fact. It’s additional motivation for us. We’re coming up against the best team in the world. So the only pressure we have is to have a good performance,” Diacre said.

The game Friday night doesn’t come without controversy for the U.S. team, which often finds itself the center of attention.

Rapinoe was caught on video earlier this year using an expletive in explaining that she would not visit the White House if the team wins the World Cup. It got the attention of President Donald Trump, who called her out on social media.

On Thursday, the day before the match, she said she stood by her comments, except the coarse language. She even suggested the uproar might help her team.

“I think, if anything, it just fires everybody up a little bit more,” she said.