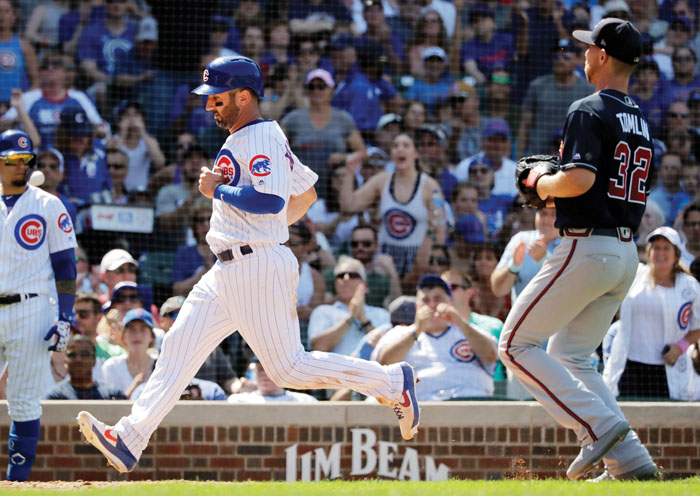 CHICAGO (AP) — Craig Kimbrel dodged trouble for a save in his season debut when new teammate Anthony Rizzo dived into first base for the final out, and the Chicago Cubs rallied from five runs down to beat the Atlanta Braves 9-7 on Thursday.

Called up from Triple-A earlier in the day, Kimbrel struck out Brian McCann looking and induced a groundout from Johan Camargo to start the ninth inning. Ronald Acuña Jr. then doubled into Wrigley Field’s ivy, and Dansby Swanson walked on four pitches. Freddie Freeman grounded sharply down the first base line, and Rizzo fielded and had to dive for the bag to beat Freeman.

Kimbrel earn his 334th career save and did it against his original team. The Cubs finalized a $43 million, three-year contract with 31-year-old free agent on June 7, then sent the right-hander to the minors to get himself ready.

Victor Caratini’s two-run homer capped the Cubs’ four-run fifth inning that put them ahead for good. Kyle Schwarber also went deep for the Chicago, which got three RBIs from Jason Heyward on a warm day at Wrigley Field with steady wind blowing out to left.

Freeman hit his 22nd homer, a two-run shot, and Ozzie Albies continued to feast on Cubs pitching with a solo drive and single for two RBIs. Swanson drove in three in the final regular season game between the NL Central and NL East leaders.

Chatwood made his third start this season and second in a week as the Cubs juggled their rotation with Kyle Hendricks still sidelined.

Schwarber lined his fifth career leadoff homer to right in the first to put Chicago ahead 1-0. Albies’ RBI single in the second tied it.

The Braves jumped ahead 4-1 in the third.

Swanson’s double to the left-center gap drove in Acuña from first. Freeman followed with a two-run, opposite-field shot to the front row of the left field bleachers.

Swanson drove in two more with a single to center to extend Atlanta’s lead to 6-1.

Chicago came back with three runs the bottom half. Two scored on Heyward’s single and a third on a Wilson’s wild pitch.

The Cubs scored four times in the fifth on a rally capped by Caratini’s line shot to right of Tomlin to take an 8-6 lead.

Albies homered off Steve Cishek in the sixth, but Daniel Descalso came home on Tomlin’s wild pitch in the bottom half.

Manager Joe Maddon says he won’t use Kimbrel for “more than three outs early on.”  On Thursday, he nailed it down after relievers Steve Cishek, Brandon Kintzler and Pedro Strop each tossed an inning.

Kimbrel pitched in four games for Iowa, allowing one run and two hits in 3 2/3 innings.

The Braves made room for Wilson by optioning RHP Kyle Wright (0-2, 7.07) to Triple-A Gwinnett. To make space for Kimbrel, the Cubs optioned RHP Tony Barnette to Triple-A Iowa. Barnette (0-0, 6.75 ERA) made two relief appearances after coming off the 60-day IL on Sunday.

Cubs: Hendricks (right shoulder inflammation) said he felt “real good” after throwing a 30-pitch bullpen session Wednesday and expects to toss a 45-pitch bullpen Saturday. Hendricks, whose treatment has included a cortisone shot after going on the IL on June 15, wasn’t sure about his return date. Maddon said it’s possible Hendricks (7-5, 3.36) could rejoin the rotation before the All-Star break.