David Freeze: Bears, wildlife ahead on the Cassiar Highway 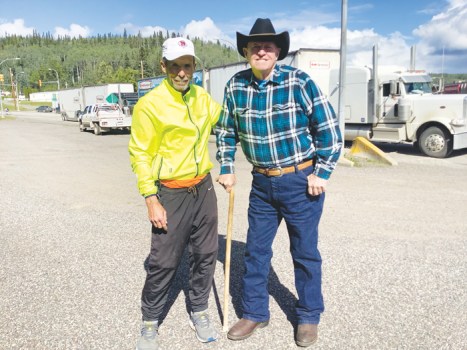 Wayne Eller, formerly of Rowan County, has lived in Burns Lake for two years. Freeze spent the night there on Sunday. 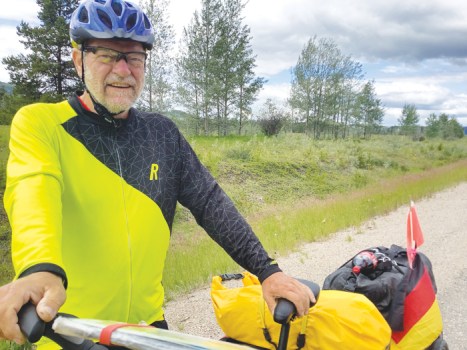 It looks like I am just going to have to deal with the wind.

It was howling when I went to bed Saturday and was blowing when I woke up Sunday in Fort Fraser. I had washed my bike shorts and put them on a chair outside to dry. The wind just blew them off the chair along with a pair of socks.

Heading west again on Canada 16 took me to Fraser Lake, Canada, a nice little town with a busy convenience store where I got my egg biscuits and other stuff. Then it was on through the community of Endako, with little going on.

Shortly afterward, I had an amazing encounter with a German cyclist named Alfred Zielinski. From Cologne, Germany, Alfred started in Whitehorse, in Canada’s Yukon Territories, and was riding south toward Vancouver.

Not long after Alfred began his journey, he took the Cassiar Highway, a particularly remote and wildlife-abundant road that I will see soon. Alfred told me what happened to him, including a grizzly that had to be shielded by a car to facilitate a getaway. A black bear didn’t want to leave him alone, either. And Alfred nearly ran out of water and struggled to carry enough food since there are only two supply points for about a week’s riding.

All this has been on my mind, too. The Cassiar Highway is the shortest route, one that I definitely need to use.

The wind and hills took their toll on my already tired legs, and I called it a day at Burn’s Lake after just 59 miles. The biggest reason that I stopped at Burn’s Lake was to see Wayne Eller, formerly of Rowan County.

Wayne moved to this remote area of British Columbia two years ago and contacted me once I mentioned the Alaska adventure route.

Wayne runs a nice ranch and trains and raises horses all in an area that can get way below minus 50 degrees in the long winter. His address is Burn’s Lake even though he has two ferry rides and a couple of hours of driving to get here.

We had dinner and caught up about lots of things. Wayne only goes to town about every two weeks or so. It is a big deal if he forgets something.

With Monday’s ride comes the halfway point. I hope the wind allows a good long ride to Smithers, Canada, and soon another turn north on Canada 37.

On Sunday, for the third day in a row, it rained twice. And the quality of the bike shoulder continues to erode. Sometimes it is too rough to ride and I have to get in the road.

My home Sunday night was the Burns Lake Motor Inn in a very comfortable room.

I will shave 20 days worth of beard Monday, once halfway is complete, and start to grow it again.

Other sponsors to remember who help make this adventure possible are Accelerate Therapy and Performance and Dr. Delaine Fowler, Gentle Dental and Dr. Tanya Williams, and Leonard Wood.

I headed west again Monday. Prayers and pleasant thoughts, send them on.