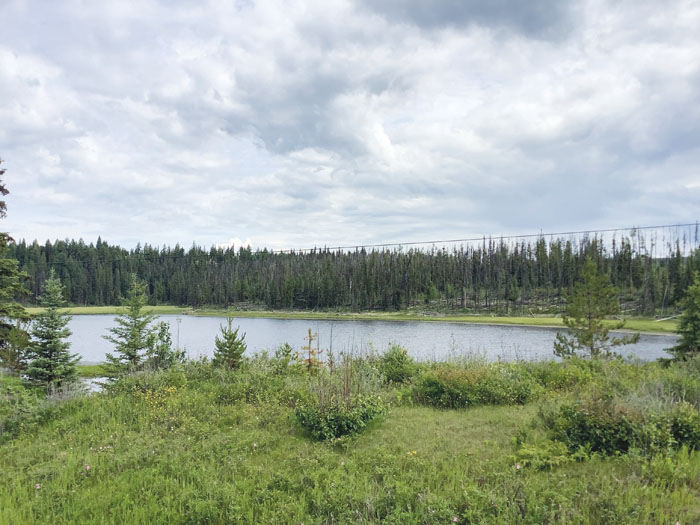 Lots of small lakes like this are common in the central area of British Columbia while the super large lakes dominated the first few days across the Canadian border. David Freeze/for the Salisbury Post

When preparing to leave the Bon Voyage Motel on Saturday morning in Prince George, Canada, I had an offer for an unusual continental breakfast.

Guests could go next door to a restaurant and get three items off a list. It was a lead-in to get folks to purchase a regular breakfast.

I took two medium-size muffins and a fruit cup and hit the road.

With the temperature in the mid-40s and no breeze blowing, I didn’t put on long pants. But that lasted about 15 minutes, especially after drizzling rain fell. I knew I was headed into 50 miles with no supply points, so my egg biscuits came from a Petro Canada convenience store. The prices are more reasonable than at other stores. I got bananas for 50 cents each, instead of the $1 or $1.15 that some stores charge.

With a cold rain falling, I also got two plastic bags to wrap my mittens if it persisted.

The scenery was unchanged from the other windy days. The wildlife signs now warn of bears and their cubs, but I keep my head down too much when the wind blows to look for them.

There were no towns for 56 miles, but I did meet a local cyclist who told me some bear stories. He had seen eight in the previous two weeks, and one of them appeared to be charging him from across the road. A big truck happened by, and the cyclist got out of the area quick.

The first town I encountered Saturday was Vanderhoof, best remembered by a long downhill into town and a long, moderate uphill to leave. Vanderhoof is the geographic center of the Canadian province of British Columbia. I stopped and loaded up on water and snacks after devouring everything I had earlier. People seemed extra friendly.

Wayne Eller, formerly of Salisbury and currently of Burns Lake, British Columbia, had called about a room for me Saturday night in Fort Fraser. 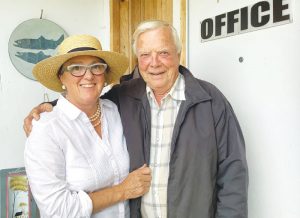 Ron and Vita Adair own the Last Spike Motel in Fort Fraser where Freeze spent the night. David Freeze/for the Salisbury Post

In the highlight of the day, I met Ron and Vita Adair, who own the Last Spike Motel. Fort Fraser is where the golden spike for the Grand Trunk Pacific Railway was driven. I will leave town with a symbolic spike from Ron and Vita, both of whom love Americans.

Ron worked in British Intelligence, and Vita was trained as a journalist.

My next stop was to visit the local cafe that is part of a Petro Canada convenience store. I got an ice cream sandwich, a veggie omelet, plenty of water, a breakfast pastry and a Mr. Big candy bar, my new favorite. That stuff is going fast as I write this. It won’t be enough through the night.

Today’s ride totaled 81 miles, and it sets up the halfway point of the whole adventure — likely to come early Monday morning.

I will be heading daily into more remote areas, probably with less cellphone coverage.

Please remember the sponsors who made this trip possible. Some of them are the Salisbury Post, Mission Senior Living of Carson City, Nevada, and Father and Son Produce.

With that said, my legs are toast and I am heading to bed as soon as this update and photos are submitted. Another wonderful bed is staring at me now.

Recent East Rowan grad passes away after accident near…