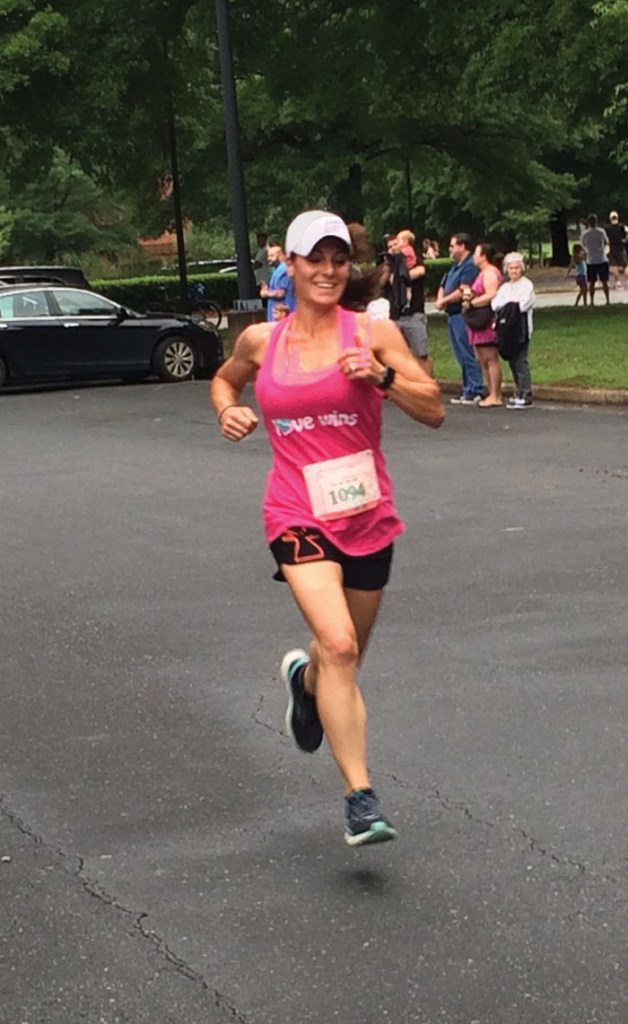 It was probably late summer when I met Deborah Carter at the Forum. I knew she ran very fast on the treadmill and our mutual friend, Robert Miller, introduced us. Robert had been encouraging Deborah to race a local 5K.

On Thanksgiving, Deborah entered the Butterball 5K. She ran 21 minutes and 26 seconds to lead her age group. The next week, Deborah raced again at the much more challenging Santa 5K with a 20:52 result. She won the female race. Deborah was hooked.

Deborah said, “I grew up in Massachusetts and I loved working out since I was in high school. My two older brothers were always at the gym and I followed their lead. I started running when I was in college to stay fit, not long or fast runs but just enough to cause the addiction! It became my stress reliever and helped me to overcome some struggles that I faced.”

After moving to Rowan County following graduation from the University of Massachusetts in 2004, Deborah hoped to enter N.C. State’s veterinary school with a degree in animal science and a job at Rowan Animal Clinic. She said, “God had other plans! I met Doug, my husband, and I now have a family with three kids and I’m a teacher assistant at St. John’s Kindergarten.”
Dylan, 11, Alana, 8 and Jase, almost 6, are her very active kids.

With running on the back burner until the kids were older, Deborah once again found more time to push herself. She said, “Running has become my “me” time! When my feet hit the pavement or the belt on the treadmill, I am taken away to a place where there is no judgement, no worries and no noise, unless I’m jamming on Pandora. I never thought I ran particularly fast or thought I’d have success at a race.”

There are no “runners” in her family, so Deborah never inquired about racing until she talked to Miller. She said, “He encouraged me to try racing and thought I could have success. Deep down, I always wanted to try a race one day. That day came when I registered for The Butterball 5K as my first official race in November 2018 where I placed first in my age group. It was there that that the drive began, and I knew I wanted to race more and to improve my time.”

Deborah continued, “My favorite race to date, and it’s only been a short time period, has been the Winter Flight race at Catawba. I loved the route and the atmosphere from all the participants. Not to mention I surpassed my goal going into that race. The other racers are always amazing, friendly and so encouraging.”

Currently, Deborah runs 3-6 miles at least four times a week or more if she can. She said, “It all depends on what’s going on that week. The last few months I haven’t been doing anything other than running, but I will get back to the gym this summer and yoga twice a week. I love yoga and miss it and want to do body pump once to twice a week. I’m hoping I can beat my current best which was 20:08 at the LAMB 5K in Mooresville.”

Deborah’s future goals are to PR a 5K in under 20 minutes and run a half marathon within the year. She said, “I would love one day for my kids to run along with me. They are all active in sports and my family is supportive of my racing. I think they actually like coming and cheering me on when they can.”

Next up is the Shiloh Missions 5K. Look for it and other events at www.salisburyrowanrunners.org

Darrell Blackwelder: This gentle pollinator does not sting