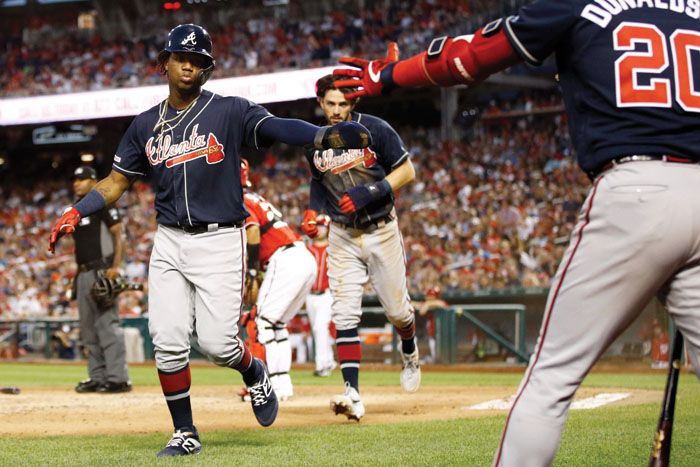 WASHINGTON (AP) — The Atlanta Braves have had enough rallies to know they are rarely out of a game. The Washington Nationals’ beleaguered bullpen has struggled enough that few leads seem safe.
A combination of the two led to the Braves’ latest win Saturday.
Atlanta used a tie-breaking three-run homer by Dansby Swanson in the eighth inning for a 13-9, come-from-behind win over Washington.
Freddie Freeman drove in five runs as the Braves erased a four-run deficit to win for the 12th time in 15 games and avoided dropping consecutive games for the first time since June 5-6. Atlanta has won eight games this season when trailing after seven innings.
“It just doesn’t matter what inning it is, what score it is, we’re coming,” Freeman said. “We’re relentless. I think we’ve proven that over and over again.”
Freeman delivered in two crucial spots Saturday, including a two-out, two-run single in the fifth and a three-run double in the seventh.
Freeman tied the Braves’ franchise record of 10 consecutive games with an RBI. Sid Gordon also accomplished the feat for the then-Boston Braves in 1951. Freeman has 18 RBIs over the last 10 games and 29 this month, the most in the majors.
“He’s on another planet,” Braves manager Brian Snitker said. “What he does is unbelievable.”
Washington, which had won a season-high five in a row and 18 of 25, failed to get back to .500 for the first time since April 23.
The Braves hammered Joe Ross (0-1), who was called up from Triple-A Fresno on Friday and was a candidate to start Sunday, when he entered in the eighth inning. Ross gave up three consecutive hits, squandering a 9-8 lead before inducing a groundout. Swanson then homered into the Atlanta bullpen in left to make it 12-9.
The game was a continuation of Washington’s season-long relief woes. Though the Nationals’ bullpen had posted a 2.75 ERA in its previous 19 games, it entered the game with 6.04 ERA for the season — worse than every team in the majors except Baltimore.
Washington led 8-4 when starter Anibal Sanchez exited after six innings. Trevor Rosenthal, pitching on consecutive days in the majors for the first time since March, walked all three hitters he faced opening the seventh inning, and Tanner Rainey then walked Swanson, forcing in a run before Freeman’s bases-clearing double — the only hit of the inning — tied it.
“We’ve got eight guys down there, and they gotta pitch,” Washington manager Dave Martinez said. “I really felt good about putting (Rosenthal) in there.”
A.J. Minter (1-4) pitched the seventh and earned the victory.
The top of Washington’s order did damage against Atlanta starter Mike Foltynewicz. Matt Adams capped a three-run first inning with a two-run homer, Juan Soto had a two-run triple in the third, and the Nationals opened the fifth with three consecutive singles, chasing the right-hander. All three runners eventually scored.
“We got down four or five or whatever it was and I’m just sitting there thinking to myself, ‘I feel like we have a chance here,'” Snitker said. “There was just way too much game left. It was just a string of really good at bats.”
TRAINER’S ROOM
Braves: LHP Sean Newcomb (concussion) pitched two scoreless innings in a rehabilitation appearance at Triple-A Gwinnett on Saturday, allowing a hit and a walk while striking out five. Newcomb is eligible to be activated Tuesday.
Nationals: OF Victor Robles left in the second inning with dehydration, the team said. Michael A. Taylor replaced him in center. … 1B Ryan Zimmerman (plantar fasciitis) played for Double-A Harrisburg for the second consecutive night, going 0 for 3 while logging seven innings at first base. Zimmerman has missed Washington’s last 49 games.
UP NEXT
Braves: Rookie RHP Mike Soroka (8-1, 2.12 ERA) faces Washington for the first time in his career in the finale of the three-game series.
Nationals: Washington plans to recall RHP Austin Voth to start Sunday. Voth is 3-5 with a 4.40 ERA for Triple-A Fresno and has yet to pitch in the majors this season.
___
More AP MLB: https://apnews.com/MLB and https://twitter.com/AP_Sports