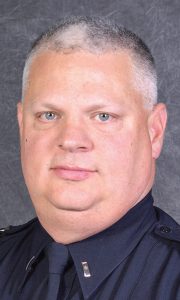 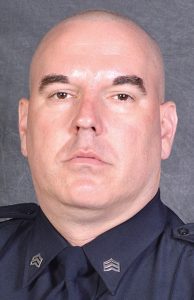 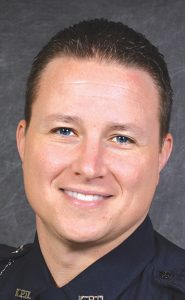 “We are proud of all these officers, and we know they will be a big part in leading the department into the future,” said Police Chief Woody Chavis.

In addition to his regular duties, Wallace is the team leader for the Honor Guard and has served as a field training officer and member of the Special Response Team.

Wallace is a graduate of Rutherfordton-Spindale High School and holds an advanced law enforcement certificate from the N.C. Criminal Justice Education and Training Standards Commission. He has completed 3,372 hours of professional training. In 2008, he received the Roger Dale Carter Memorial Service Award.

Wallace and his wife, Emily, have three children.

Tomlin began his career with the Kannapolis Police Department as a patrol officer in 1998. In 2000, he became a field training officer and a negotiator for the Special Response Team.

Tomlin is a graduate of Concord High School and holds an advanced law enforcement certificate from the N.C. Criminal Justice Education and Training Standards Commission. He has completed 2,839 hours of professional training.

Tomlin is married to Joann Ylitalo.

Kiser began his career with the Kannapolis Police Department in the spring class of Basic Law Enforcement Training in 2009. He was a patrol officer until he became an investigator in 2016. He has earned designation as a master police officer, a member of the Special Response Team, and a field training officer.

Kiser holds an intermediate law enforcement certificate from the N.C. Criminal Justice Education and Training Standards Commission and has completed 3,008 hours of professional training. He has received several honors including the 2012 Veterans of Foreign Wars Post 8989 Officer of the Year Award; the 2013 Physical Fitness Award for the 30-39 age group; the 2018 Cannon Memorial Masonic Lodge Community Steward Award; and the 2019 Roger Dale Carter Memorial Service Award.

Kiser is a graduate of Northwest Cabarrus High School and earned an associate degree in electrical technology from Rowan-Cabarrus Community College in 2007.

He and his wife, Brooke, have two children.

Rowan weather: Sunny and breezy; a few storms this weekend

This morning is a refreshing change from the high humidity days of the past week. Today will be sunny and... read more