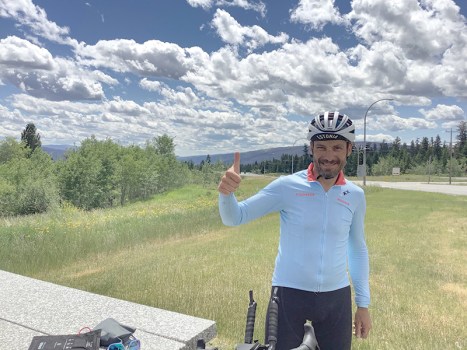 David Freeze met Raimo Laosma, of Estonia, who was riding from Fairbanks, Alaska, and headed south to Argentina. 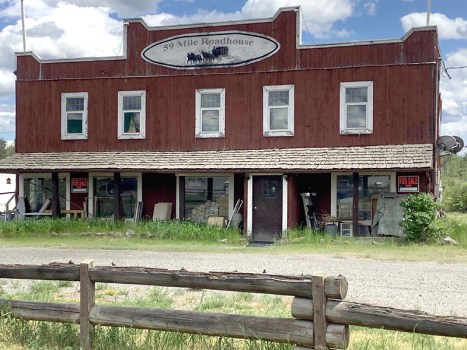 One of the old stagecoach stops along BC 97 North.

Yet another headwind, but also some hail and a good soaking.

I didn’t expect a long day Tuesday. And I didn’t expect to go out the door of the Sundowner Motel in Cache Creek and immediately face a headwind. Confused about the direction to start, I rode up to a convenience store and asked, just to make sure. I had the wrong town in mind and used Chase instead of Chasm. Once we got that figured out, I was on the right road but definitely facing the wind.

I had two egg and cheese muffins and planned to wait a little while to eat them. The progress was so slow that I stopped to eat before I had completed 2 miles. Going north on B.C. 97 continued upward and into the wind, allowing me to only make 25 miles by 11:30 a.m. I had climbed a mountain that went on all morning.

At the bottom of the mountain was the neat little town of Clinton, British Columbia. There were lots of interesting shops and some nice people as I rode through. I stopped at the Petro convenience store hoping for ice to put in my water bottle, but they had none. Then I stopped at a Shell station, which also served as a downtown market. With no ice still but laden with some good snacks from both places, I set out for the afternoon.

I was told by both store clerks that the road ahead was hilly but not as bad as I had already experienced that morning. Right away out of town, there was huge hill that topped out at a rest stop.

Just as I was pedaling in, a cyclist came in from the other direction. Raimo Laosma, of Estonia, was riding from Fairbanks, Alaska, and headed south to Argentina. We talked briefly and captured some photos and kept going while wishing each other “safe travels.”

I decided to head for a town named 100 Mile House. Along the way, I would pass by Chasm and then ride through 59 Mile House, 70 Mile House and 83 Mile House. All of these were stage coach stops at one time.

There was a fair amount of climbing, and the headwind persisted. At one point, I went over the Begbie Summit at 4,041 feet. Afterward, the ground leveled out until approaching 100 Mile House, my home for the night. Within the last 10 miles, it rained lightly, hailed pea-size ice balls, and then it poured and got cold. My last 3 miles into town were freezing.

The first motel I called was full, but the clerk referred me to the Red Coach Inn in 100 Mile House. Nobody answered, but I went there anyway and got a nice room. I was so cold from the rain and wind that I ran the heater, a first for that on this trip.

I made 71 miles for the day, a great number for how challenging the riding was. On Wednesday, I planned to head for Williams Lake first, about 50 miles in, and then hope to find a place to stay on up the road. The weather was supposed to be cold with a chance of rain. Thursday would get even colder. One Wednesday forecast was for showers and a low of 30 degrees plus a high in the mid-50s. More of the same was predicted for Thursday.

My iPad worked for a day, then went back to not transmitting the photos and updates. So I have to make time to call Windstream and be patient enough to sit with them for the fix.

In just a few days, I will be finishing off British Columbia and heading into the Yukon. Mosquitoes got after me several times Tuesday, and I passed my first moose sign.