‘No reason to get snippy’: Freeze crosses into Canada 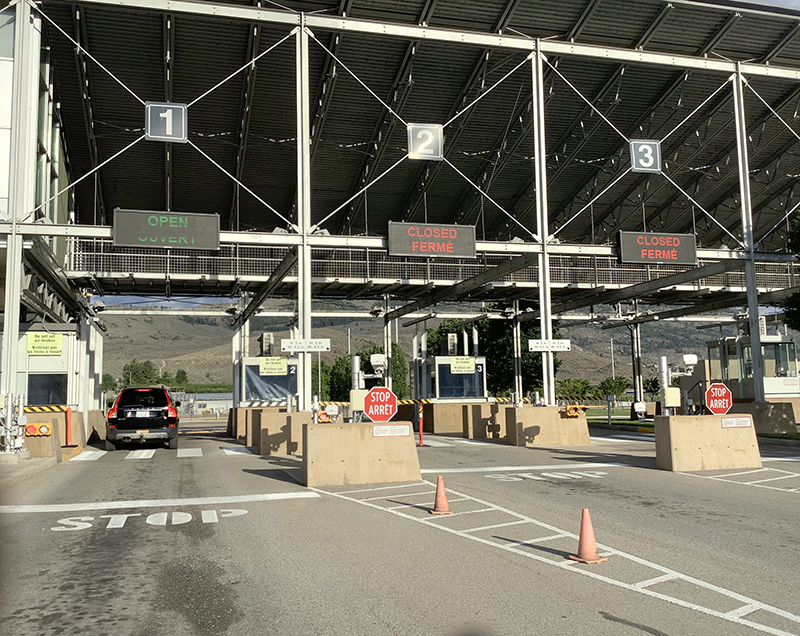 Saturday was a day of high anticipation. I was ready to get into Canada.

The night had been wonderful at the Camaray Motel in Oroville, Washington.

I got my iPad squared away with Verizon to use Travel Pass, meaning that every day I use its connection in Canada will cost $5. I am hoping for a lot of Wi-Fi.

I pedaled the short four miles to the Canadian border customs area and waited on only one car. Once it drove away, the officer called me up and began asking questions quickly.

He asked if I had ever been to Canada before, and I told him that my entry was at Buffalo, New York, on another of my trips toward Niagara Falls.

He said, “Sir, Buffalo is in your country.” I told him I was aware of that.

Then he asked me if I had any fruit. As I was telling him about my one banana, he asked about firearms.

I didn’t answer that one fast enough, and he asked, “Sir, do you have any firearms?” I told him no and I said, “You didn’t give me time to answer the first question. There is no reason to get snippy.”

As you can imagine, he didn’t like that and told me to pull my bike over and come inside and wait while he ran a background check on me.

The officer inside, Officer Williams, was nice, and we talked at length about my bike ride. He suggested a slightly different route than I had planned.

Several other cyclists echoed his thoughts later in the day.

I exchanged a small amount of money at the duty-free shop on the Canadian side and enjoyed the conversation there. A woman appeared to take my picture at the British Columbia sign. She had just taken a picture of another guy headed for Alaska, but he was in a truck.

My different route involves staying on B.C. 97 instead of a more western route that Officer Williams didn’t like as well. I looked at a map briefly and winged it through the day but wondered what I would plan for Sunday.

Back at the Camaray Motel, I was told to stop at the Oliver, British Columbia, visitors center since the one at Osoyoos would not open until 10 a.m. I stopped in Oliver and Cait Wills helped me with all she could and called ahead to the visitors center in Kelowna to have a man named Casey prepare some information.

Back on the road, I pedaled through the British Columbia towns of Okanagan Falls, Kaleden, Pentiction, Summerland, and Peachland and into Westbank. Most of that was along Lake Okanagan.

Most of the riding was moderately challenging and was into a strong headwind for several hours. At one point, I was struggling to make progress but ended up at the Super 8 in Westbank. The 79 miles for Saturday was hard, but it is done.

On Sunday, I would be back on B.C. 97 to head west through the towns of Vernon, Falkland and Kamloops. I had some information to sift through and just bought a British Columbia map.

I have said it before, but I am amazed at the prices of things in this area. An Egg McMuffin was quoted to me at $4.19. Things that cost $1.50 at home cost $3 here. Gas prices are outrageous.

One guy told me Saturday about the great health care here and that the only ones at home who could get health care are the wealthy. That was a conversation that I didn’t want to have, so we went back to talking about bikes.

My route change will eventually catch back up to what was originally planned.

Sundays usually go well for me on these rides. I hope to be more squared away by the next report with more of a big-picture plan in place. My own prayer will be for a little easier riding. Whatever happens, I’ll deal with it.

It’s going to be fun!