All-County softball: Walton is ‘a beast with the bat’ 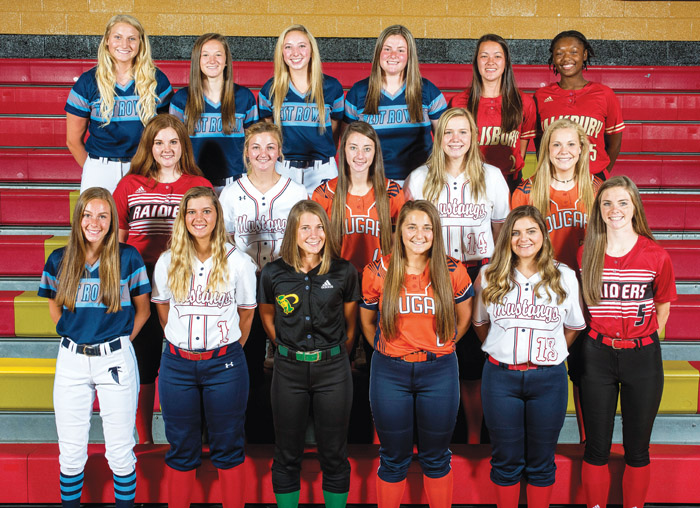 Up or down, in or out, the rising junior managed to get the barrel on just about everything thrown in her direction during the 2019 season.

Walton brings exceptional eye-hand coordination to the batter’s box and a polished lefty swing that can lift and drive the ball out of any park in a hurry.

“Taylor’s just got it,” West head coach Jimmy Greene said. “Such a pretty swing. A beast with a bat in her hands.”

Fans may remember Walton’s name from her Rowan Little League days. She was part of the Rowan team that won the 2015 World Series and served as the No. 1 pitcher for the 2016 squad that finished as the World Series runner-up. Both of those big events were nationally televised.

In that 2016 World Series, she twirled an eight-inning shutout against Michigan and a no-hitter against Nethlerlands. A lefty hurler, she can really spin the ball and has a variety of pitches.

Pitching is still a big part of who Walton is, but injuries limited her to six appearances in the circle this season, a 1-0 record and a 2.47 ERA.

With Whitley Arnott, the Post’s Rowan County Pitcher of the Year, joining the Falcons, Walton didn’t have to pitch hurt. She was able to focus on playing first base and driving in runs, and while she healed physically, she turned in a super sophomore season for a team that won three championships and reached the third round of the 3A state playoffs.

“I just wanted to do whatever was right for the team,” Walton said. “And no matter where I played, I wanted to produce as often as I possibly could.”

West went 22-4 against a challenging schedule that included strong 4As Mooresville, Lake Norman and Hickory Ridge. West played 3A defending champ Alexander Central and 3A runner-up Central Cabarrus and took on three good teams in the state playoffs.

Walton just kept hitting, no matter whom the Falcons faced. For the season, playing in 22 games, she batted .509 with five homers and 31 RBIs. She walked 13 times and was hit by pitches (4) almost as many times as she struck out (5). Her on-base percentage was .613.

The OPS stat is a fine way to measure offensive productivity because it combines the ability to get on base (on-base percentage) with the ability to produce extra-base hits (slugging percentage). Walton’s OPS was an outstanding 1.455,  the best on a West team that had several standouts.

In  10 games in the North Piedmont Conference, where the Falcons’ toughest opponents were Carson and East Rowan, Walton went 14-for-24 (.583) with four home runs. She didn’t pad her stats against last-place Statesville. She only had two at-bats against the Greyhounds, with one hit. West’s biggest NPC victory was 4-3 at home against second-place Carson, and Walton led the Falcons in that one with three hits and two RBIs.

“She carried us in a lot of tough games,” Greene said. “We could always rely on her bat, and we beat some great teams. ”

As far as county games, West only played the other two teams in Rowan that had winning records. In her five games against East Rowan and Carson (she missed the East game in the Civitan Tournament), Walton was 9-for-16 (.563) with seven RBIs. In the NPC tourney championship game against the Mustangs, a 4-1 victory for West, she was 3-for-3 with two RBIs.

“I played through some pain, at times,” Walton  said. “I just did what I could do. When we got runners on base,  it was my job to drive them in.”

She did that job about as well as you can do it.

“There’s a reason Taylor plays on a travel ball team (Carolina Cardinals) that competes all over the country,” Greene said. “She’s really special. When people get disappointed when you don’t get three hits, you’re special. Believe me, Taylor is harder on herself than anyone is. She expects to get a hit every time.”

With Arnott being recognized as the top pitcher in the county, Walton’s stiffest competition for county player of the year came from teammate Mary Sobataka, a senior who led the county in homers (8), RBIs (33) and walks (29), while handling 46 plays at shortstop with no errors. Walton had the edge on Sobataka as far as batting average, OBP and OPS and struck out less, but Sobataka still had a magnificent season.

East Rowan senior center fielder Maddie Trexler batted .547 and turned in a colossal offensive season with a 1.414 OPS. Her teammate, senior catcher Mackenzie Sprinkle, was voted NPC Player of the Year by the league’s coaches for her combination of a .481 batting average and strong catching skills.

South Rowan senior third baseman Anna Blume (6 homers, 1.515 OPS) carried the Raiders’ offense.  Salisbury sophomore Ellen Yang put up the highest batting average (.549) and highest OPS (1.861) in the county, while socking seven homers. She also struck out 126 batters as the SHS pitcher. Yang did a lot of her offensive damage against weak teams, but her numbers were still incredible.

ALL-COUNTY SOFTBALL TEAM
Whitley, Arnott, West, Jr. — Not only was she the North Piedmont Conference and Rowan County Pitcher of the Year, Arnott batted .338 with 23 RBIs.

Taylor Walton, West, So. — Rowan County Player of the Year already is  one of the most consistent and productive hitters in West history.

Maddie Trexler, East, Sr. —  Led the Mustangs with 29 runs and tied for the team lead in RBIs with 22. Headed to Pfeiffer.

Mackenzie Sprinkle, East, Sr. — Tied for the team lead in RBIs with 22. NPCe Player of the Year. Headed to Belmont Abbey.

KK Dowling, West, So. — Volleyball star made a big jump in softball. Outstanding in left field and batted .437 with three homers and 17 RBIs.

Haley Strange, East So. — Hit three homers, drove in 20 runs and batted .377, while handling most of the pitching duties.

Kaitlyn Honeycutt, Carson, Sr. — She can hit. Usually the DP for the Cougars, she batted .453 with 17 RBIs.

Kaitlyn Samples, East, Jr. — Outfielder had 16 RBIs, including a grand slam. Walked more than she struck out and had .500 OBP.

McKenzie Shoaf, North Sr. — Handled the pitching for North and also was one of the Cavs’ top offensive players.