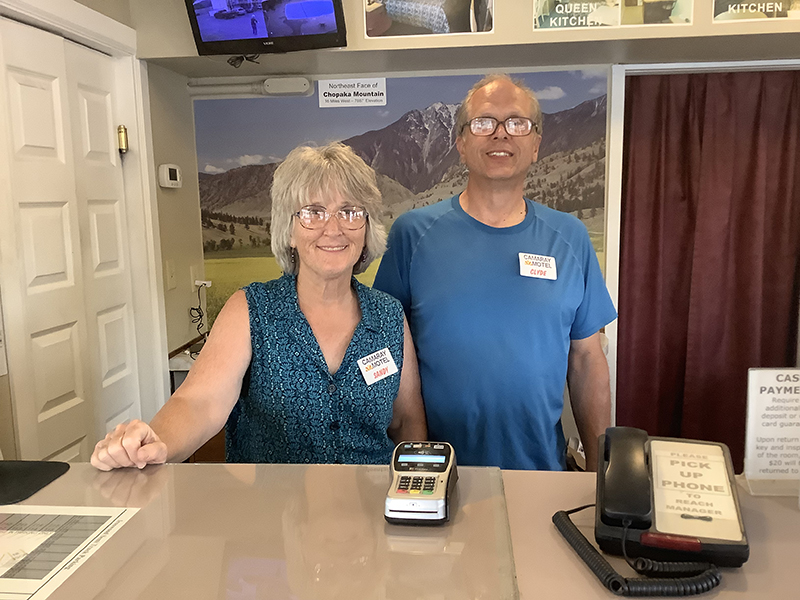 Freeze stayed in the Camaray Motel in Oroville, Washington on Friday evening. Clyde and Sandy Andrews helped with ideas about the Saturday morning border crossing and the continuation of the trip to Alaska.

Friday morning was the one day on the whole trip that I started riding in short sleeves. A warm morning and clear sky in Pateros, Washington, greeted me along with a slight headwind.

The first six miles along U.S. 97 were quick, and I stopped at McDonald’s in Brewster, Washington. There were no customers except for a guy bought coffee, and I found out why. An Egg McMuffin was $3.69, and there were no specials.

Just down the road was a packed convenience store selling breakfast biscuits and burritos.

Brewster was dead center of several huge fruit-packing operations, all going crazy very early. I saw a helicopter, part of a small fleet, flying over the cherry trees. Someone said the purpose was to dry them.

The Columbia River turned off as I picked up the Okanogan River. Much smaller, the Okanogan was the water source for endless agricultural production on both sides of the river for the rest of the day. As I have stated often, following a river takes out major climbing unless the river is rushing at you. This one wasn’t, and there was not a huge hill all of Friday.

Next came the towns of Okanogan and Omak. In an amazing coincidence, I had crossed this area on my ride across the Northwest in 2017.

There were lots of memories for me. The Loup Loup Pass from Twisp is a huge pass that was under major repair after a huge storm. I was told to go 50 miles out of the way but succeeded in talking my way through the repair zone.

Facing a major headwind, I rode past the towns of Riverside and Tonasket, the actual crossing point of the two journeys. Two years ago, I got up at the Red Apple Inn and turned east on Washington 20 to climb a series of steep hills, including the Wauconda Summit and Sherman Pass.

This time, I stopped again at the junction, at one of the best convenience stores I have ever visited and talked with Alyce. She was excited about this next adventure and promised to follow it.

Next, I stopped at the Red Apple Inn and caught up on running, President Donald Trump and much more. Owner Chris Zaferes is 80 and still walks three miles a day after a knee replacement. He has done several marathons.

All of the towns visited earlier have a rich Indian history and have many pioneer and native descendants still important to the area.

Back on the road, I pedaled on to Oroville, the last town before the border. I had a room at the Caraway Motel and got plenty of help on what to expect on my trip into Canada from Clyde and Sandy Andrews, the managers.

After 80 miles Friday that were relatively easy along the river, I am almost ready to cross the border. My passport is ready and my phone is too, but my iPad still has an issue that I hope to fix before crossing early Saturday morning.

Clyde Andrews mentioned that I could stay on what will become Canada Highway 97 for much of my trip to Alaska, and I will ask about that at the welcome center. It appears to still follow the river for a while. Friday’s ride was called the Okanogan Trail.

The four miles to the border will be the second goal after the Verizon issue, then I will cross the border and exchange some U.S. dollars for Canadian dollars.

Another new sponsor this year is Luann Fesperman of the Trophy House. Luann makes nearly all the awards for local races and makes sure that all the local charities get good prices and thoughtful quality too.

I had no idea where I will end up Saturday, but I was certainly excited about seeing this side of Canada.

Ask Us: What are plans for empty gas station…