All-county girls soccer: WR’s Mehmedovic is Player of the Year 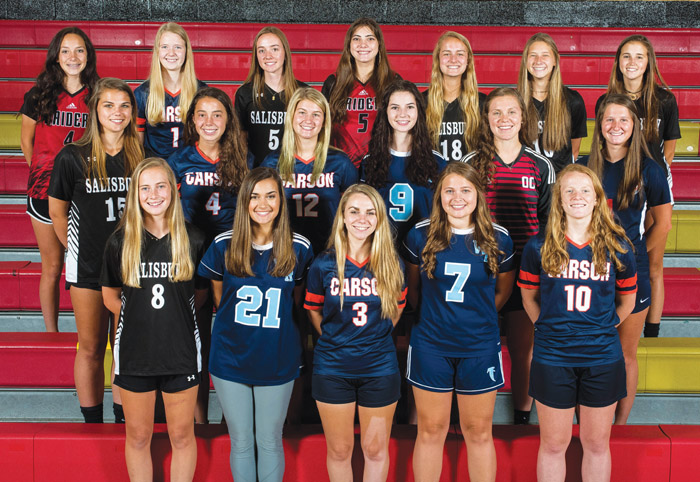 Fourth in a series on the seven All-Rowan County teams for the spring.

Her last name … it’s a mouthful. Might as well learn to spell and pronounce it now as the recent West Rowan graduate transcends from do-it-all prep midfielder to show-us-what-you-can-do Catawba College freshman.

“My family is from Bosnia,” explained Mehmedovic (ma-med-uh-vik), Rowan County’s girls soccer Player of the Year. “I was born here. I know it’s a tough name to say. You’re not the first to struggle with it and probably won’t be the last.”

Fame may soon have a new partner in Mehmedovic, a 19-goal scorer who filled the all-important center-halfback position for the Falcons this spring. She led West (8-8-2) to a 5-5 North Piedmont Conference record and a third-place tie in the standings. But disappointment prevailed when it lost a post-season coin toss and sat out the 3A state playoffs.

“We haven’t necessarily been good in past years, but this year, we were,” she said. “We found out that if we all work together, we can be successful. Unfortunately, we didn’t have luck on our side. We were all upset, but at least we were in position to lose a coin flip.”

It did little to dim her outlook. Mehmedovic is already a club-level player with international experience. She spent her entire junior year at the U.S. Soccer Academy in Charlotte and trained with the Bosnian national team for several weeks in the winter of 2018.

“I took a year off and I’m glad I did it,” she said, self-assured as ever. “I learned so much. They make soccer so much more intense and extremely intimidating. Sometimes it was tough to keep up with everything. But they helped me with things like getting to the ball faster and seeing more of the field.”

She returned to West last August and made a quick impact on coach Alan Puglia’s program, potting 17 goals in the season’s first 13 matches. Her most dazzling display of playground artistry was submitted on April 10, when she scored five times in a conference win against Statesville.

“My aggressiveness has soared,” Mehmedovic said. “I used to kind of just give up and get discouraged if we were losing real bad. This year was different. No one gave up.”

“Just by being on our field, she elevated the play of everyone on the team,” he said. “She took charge and pushed everyone to be better.”

Puglia believes Mehmedovic has all the tools needed to contribute on the collegiate level.

“First of all, her touch,” he began. “She has this great ability to control the ball. She always keeps it close to her feet, almost like it’s attached to her. It’s really, really impressive to watch.

“Also, her vision,” Puglia continued. “She sees the field, sees things before they happen. She has that sense of anticipation, of knowing what’s coming.”

Mehmedovic says the decision to enroll at Catawba and join revered coach Nick Brown’s squad was an easy one. Brown is also a former West Rowan head coach (2010-13), prior to Mehmedovic’s arrival.

“I’ve been coming to his camps for a while,” she said. “I always wanted to go to Catawba. When he offered, I couldn’t say no. (Brown) is a great coach. He pushes you to be your best and lets you know what you need to do to be better. He won’t give you the answers, but he’ll help you find them yourself.”

Mehmedovic plans to study biology and chemistry at Catawba, then pursue a medical degree. She hopes it paves a career path toward becoming a physician’s assistant.

“I know it’s a great soccer program already,” she said. “I just want to go there and fit in. I’m hoping I can be an asset. I don’t have a certain, set plan, but I think it will all turn out in my favor.”

If it does, we’ll all know her name.

Coach of the Year —  Matt Parrish, Salisbury, after leading the Hornets to a 20-3 record and the second round of the state 2A playoffs. Salisbury was 17-1 in the Central Carolina Conference, tying for first place.

HS wrestling: Davie Hall of Famer steps down after…