David Freeze: On Day 9, special challenges add up to a satisfying day 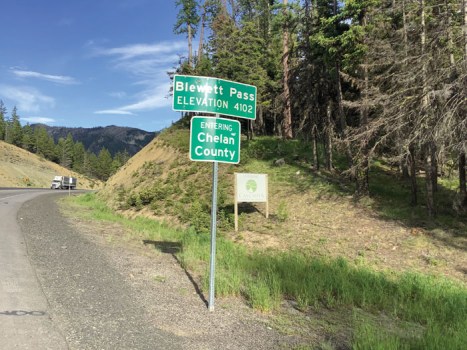 Climbing this pass just about did Freeze in. He climbed and descended nearly 9,000 feet today on Wednesday. David Freeze/for the Salisbury Post

It’s past 10 p.m. Wednesday here in Cashmere, Washington, and I am just starting my update. That’s way later than usual, but I am still pumped over a special day. And the fact that I have already had a pint of ice cream, a sandwich and a small bag of chips makes it better.

The concern for me Wednesday morning was that U.S. 97 would merge with Interstate 82 right outside Old Gap, where I had spent Tuesday night. I had done some research and found that only in a very few specified areas were bikes not allowed on the interstates in Washington.

Around Yakima was not one of those places, so I felt OK. I knew that if for some reason the police pulled me over, the route for my ride would be a mess. Simply, the interstate had to work, but I was concerned to see a sign on my first ramp that pedestrians are not allowed. North Carolina considers cyclists to be pedestrians.

I jumped on I-82/U.S.97 and started riding, pushing it hard for the first 10 miles. There were a couple of tight spots but I didn’t get stopped and rode I- 82 until it intersected with I-90, then rode for five more miles until 97 headed north on its own.

Wednesday was the second most physically challenging day of the trip. Of the 40 miles on the interstates, most of it was severe climbing and no scenery. My morning went very slowly, climbing and descending from three ridges until I dropped into Ellenwood. Across and down the last ridge brought me into a beautiful fruit production area. Lots of cherries seem to be in season plus asparagus. I saw an open trailer loaded with apples too. Hay is being harvested everywhere.

Just north of Ellenwood, I could see on the map that the afternoon would be long and hard. It would take 54 miles of climbing over one mountain, and then Blewett’s Pass took everything I had. Finally, at about 6:30 p.m., that beast was conquered and I headed for Cashmere and the wonderful Village Inn Motel.

The last 28 miles took just less than two hours. The ride totaled exactly 100 miles, but it took a short trip to the grocery store to get the last quarter mile.

I didn’t have many conversations Wednesday. One I did have was with the clerk at a Conoco convenience store at the beginning of the last 58 miles. He assured me that there were stores along the way, but there were none. I was about out of water again.

I booked a room for Thursday near Brewster. It’s on the Columbia River, and I will have a second-floor room facing that great river. Go Warriors! I do plan some needed washing time too.

It looks pretty sure that two more days of riding in the U.S. will complete that part and then I will be on to Canada. Right now, I have completed about 800 miles with just over 3,100 total needed to reach Anchorage.

Wednesday turned out great but I missed the people conversations. It was supposed to be really hot here, but the mid-90s didn’t happen as predicted. I dropped about 3,000 feet in elevation Wednesday afternoon, so tomorrow might be warm.

Vac and Dash from Albermarle and Gear for Races are back as sponsors again. Peter prints our race shirts and Luis supplies them. Both are great to work with.

See you back here again. Canada is coming up soon.