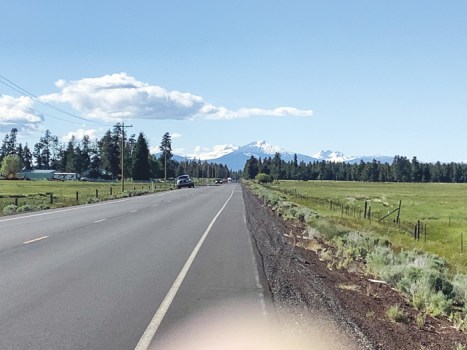 Freeze saw these mountains ahead for the last 15 miles of the Oregon Scenic Byway. David Freeze/For the Salisbury Post 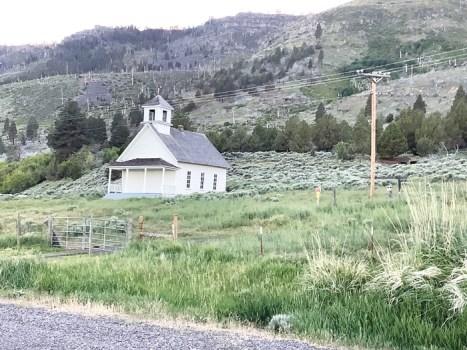 The Harris Schoolhouse was built in 1890, just outside Summer Lake. It was used until the community purchased a school bus to take students to Paisley. David Freeze/For the Sailsbury Post 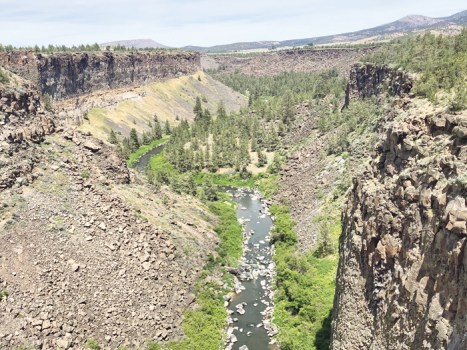 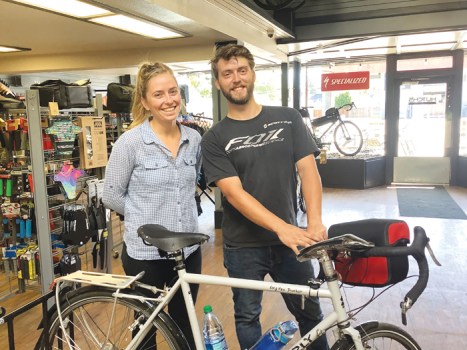 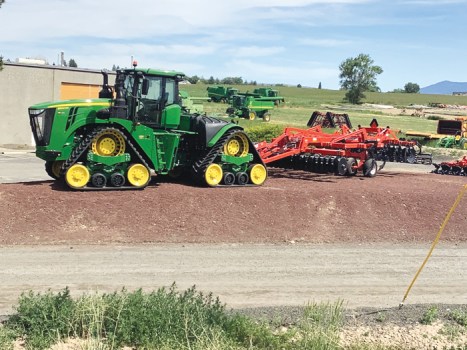 Full size and modern farm equipment was on sale in Madras which is surrounded with fertile farmland. David Freeze/for the Salisbury Post

I lingered in the room a little longer than I planned Saturday morning. I was slow getting everything together after a brutal Friday. I had washed my bike shorts and the baseboard heater had just finished drying them after I got up. Toasty and warm, they made it easier to go out in the 32-degree weather.

When I left, the bird watchers were already out on a spectacular morning. I was told that the tight motel situation is because of the birding. The song birds seemed to be everywhere around the lodge and for several miles on either side.

How do I know this? Because I turned the wrong way and pedaled three miles in the wrong direction until I realized the mistake. The scenery was so beautiful, this time in the daylight, that I didn’t mind much.

Harris Schoolhouse was something that I saw. Built in 1890, it served the area until a bus was purchased to take students back to Paisley. In 2002, everything around the schoolhouse was burned in a fire started by lightning, but the school still stands.

Leaving out of Summer Lake, I had a little major climbing to do but the weather was nice and wind was not a factor. Once over a mountain, always unnamed in Oregon, I found a long flat stretch with little traffic heading into Silver Lake, the next town. Silver Lake had 43 people die on Christmas Eve 1894, all burned in one building,

I loaded my bags with food and water for the trip to La Pine.

Next came 48 miles to La Pine, Oregon, and the end of the Oregon Scenic Byway. The best snow-capped mountains that I have seen yet were visible for the last 15 miles as Oregon 31 stopped still miles away. I saw two big elk leap down the hill ahead and then off quickly after crossing the road.

Fort Rock is a volcano bed that looks like a fort. There are several in the area that I passed through as are a lot of fossil sites. Nomads are thought to have been in the area by at least 11,000 years ago.

The 78 miles for the day included six on the wrong turn, but it was all a part of the trip.

I stayed in La Pine Saturday night at the Valley View Motel, similar to a Route 66 motel.

Off the road by 6 p.m., it would have been an easy day for me to hit 100 miles had I not already booked the room. All the cheap hotels have been booked early the last few days, so I grabbed a room here about six hours before arrival.

On Sunday, I planned to stop at a bike shop in Bend, Oregon. I have nine speeds on each gear ring making 27 overall. The fastest two on each group of nine are not working. I know there will be major climbing ahead so I will need them.

It was 28 degrees when I got up in La Pine, Oregon, on Sunday morning. The flags were gently moving toward the north. A bright sun was predicted along with a warm afternoon. I wore long pants and the mittens to start but shed both by midmorning.

I pedaled toward Bend, about 30 miles away, with snow-capped peaks to my left. Only one challenging climb over the La Butte Pass at something over 4,000 feet slowed a fast trip. I knew the bike had to be fixed before I got away from towns and chose Hutch’s Bikes, glad that they were open on A Sunday.

Bend is known as one of the fittest communities on earth and has plenty of almost every endurance sports activity. I passed through Bend on my first cross-country ride. This time, I rode downtown to find Hutch’s and got a better look at the city of 90,000. Bicycles and runners were everywhere. Bike lanes took priority over street parking. Drivers are friendly, too.

At the bike shop, Holly and Max took care of me. I had to wait just long enough to get some bagels and a brownie next door and arrange my room for the night. Max corrected the issue with the gearing and installed a tube in the rear tire, and I purchased three more for the road. The service could not have been better.

Then it was on to Redmond, home of 25,000, another 16 miles north and still on U.S. 97. Just a few gentle rolling hills and one bad one, along with plenty of flat and almost flat made for a nice 76-mile ride that eventually accounted for the best day yet on this trip.

Madras was the final destination, a town of 6,000 that has all the food chains and some of the motel ones. U.S. 97 junctions with 26 here. I had a huge omelet for dinner here from the Brown Bear Diner and slept at the nice Budget Inn.

Just north of Redmond all the way into Madras became beautiful, irrigated farmland with plenty of alfalfa hay drying. I saw one field of carrots that were being raised for seed.

Monday would be a long ride and my last full day in Oregon. The bike was working well after the repair so I hope to approach 100 miles tomorrow with a destination of Wasco, just five miles south of the Columbia River and the Washington border. I would still be on U.S. 97.

A few scenery photo opportunities were almost breathtaking for me, especially when I saw the river running through a deep gorge that can’t be seen from cars. I did see a woman sleeping on gravel outside a nearby bar in Madras. She must like it better than me.

Monday’s trip completed the first week of travel and three states. I feel good after a sound sleep the last two nights. Nothing is especially sore and I feel strong. It is supposed to get hot here but small towns should be spaced well for supplies tomorrow, if they have stores.

So far, this ride is just what I hoped for. Keep sending those prayers.