David Freeze: After sleeping on gravel and in pickup, day three brings a motel room 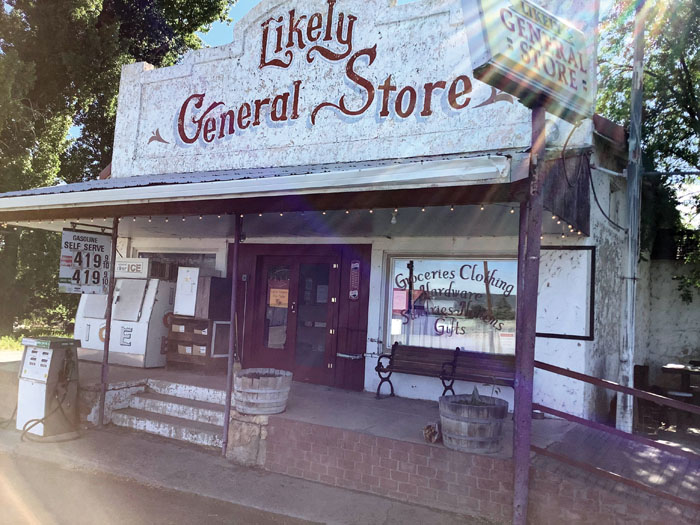 The Likely General Store, the store that David waited 70 miles for.

Just a few words about how great it is to be in a motel room tonight (Thursday).

In both the last two days, I have been very uncertain and neither ended the best. Spending the night in the back of a pickup and on a massive pile of gravel didn’t get the job done. And last night, I found out for sure that my 50-degree sleeping bag won’t cut it, either. With the wind blowing, I was very cold on a 46-degree night. My next sleeping bag, soon to be purchased, will have to be thicker.

Nothing bothered me last night, but I am looking forward to a good sleep in Lakeview, Oregon. I am in the Interstate Motel here, arriving in the rain just after 7 p.m. after a day that involved heavy climbing and a total of 93 miles. I am sore in several areas.

Last night, I knew I had 70 miles of riding before I could get some supplies at Likely, California. About 50 miles of that was done the previous evening and 20 more miles came this morning. And the store I had waited so long on was not open. So, I sat on the porch for about 15 minutes to get a snack and a couple of cheap waters from an old-time hardware and general store.

The town of Alturas was 20 more miles and, somewhere along the way, I got my energy going. All this was still on U.S. 395 North. When I asked a convenience store operator about the route ahead, he said, “ You will like it and you will make it.” Alturas is a busy town of at least 20 blocks and not a single stoplight in sight.

What I found as I pedaled north was 54 miles of rolling and bigger hills. One of these was huge, and I had more power than expected this early in the ride. I rode this one peak all the way to the top, passing a 5,000 feet sign with more than a mile to go. California didn’t name their peaks, and they always seem to put the elevation sign at 5,000 even though it never was near the top. That must be a California thing.

At the top, I spotted another huge body of water called Goose Lake. It went on for miles and miles. Once over the peak, a monster headwind blew sideways enough to sometimes push me to the side of the road. That sidewind was especially tiring. More of that is expected over the next couple of days as a cold front takes over.

Heavy clouds helped those winds make it cold this afternoon and produced a little rain. I was glad to find the Interstate Motel in Lakeview, Oregon, and a garden burger across the street. I just had my first shower since Tuesday morning.

I will still be on U.S. 395 first thing Friday morning, but I will leave it to follow a scenic byway toward U.S. 97, my next long-term friend headed north. Tomorrow evening (Friday) could be really interesting.

New today were two live rattlesnake sightings. One came within 6 feet of me as I sat on the bike taking a drink. He went in a hole under some bridge metal. The second was heading to cross the road as I passed by. I had never seen one before alive. I probably saw six more killed in the road today. Those are reasons not to camp in the brush of the Nevada or California high desert.

Oregon will take me a few days cross from bottom to top. I have a map and hope to not make any mistakes along the way.

David Freeze is a Salisbury Post contributor who’s biking from Nevada to Alaska. Email him at david.freeze@ctc.net.