Breaking: Keuchel, Braves near 1-year deal for about $13M 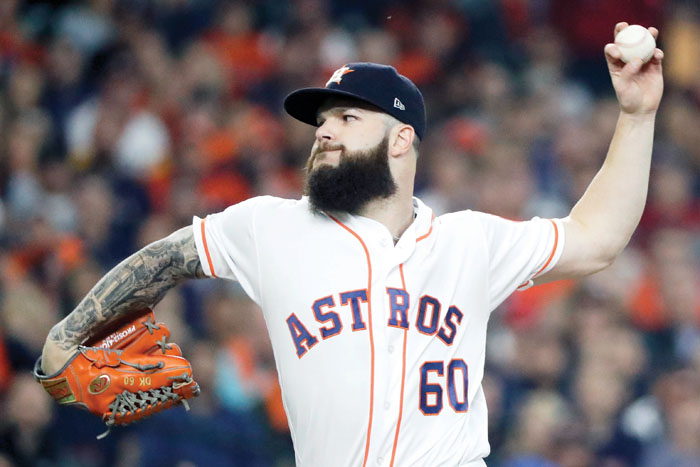 By RONALD BLUM AP Baseball Writer
NEW YORK (AP) — Free agent pitcher Dallas Keuchel and the Atlanta Braves are near agreement on a one-year contract that would pay the 2015 AL Cy Young Award winner about $13 million, a person familiar with the negotiations told The Associated Press.
The person spoke on condition of anonymity Thursday night because the agreement had not been finalized.
Keuchel’s contract would include a salary of about $21 million, and he would get a prorated share of that because only about 115 days will remain in the 186-day season.
A 31-year-old left-hander, Keuchel was 12-11 with a 3.74 ERA in 34 starts last season for Houston and turned down a $17.9 million qualifying offer in November.
He has options remaining, allowing him to start his Braves tenure in the minors as he builds up arm strength and stamina.
A two-time All-Star, Keuchel had 216 strikeouts during his Cy Young season but fanned only 153 batters last year, when he had a $13.2 million, one-year deal.
He is 76-63 with a 3.66 ERA in seven major league seasons, all with the Astros.
Some teams were reluctant to sign him because of a drop in recent years in some of his advanced metrics, such as percentage of swings and misses.
Interest increased beginning Monday, when the amateur draft started and a club signing him no longer had to give up one or two draft picks and possibly international signing bonus pool allocation.
The New York Yankees offered a prorated share of the $17.9 million qualifying offer amount (about $11 million), a person familiar with their proposal said. That person spoke on condition of anonymity because New York’s offer was not made public.
After winning their first NL East title last year since 2013, the Braves are 33-29, two games behind first-place Philadelphia.
Atlanta’s all 28-and-under rotation thus far has been led by 21-year-old rookie right-hander Mike Soroka, who is 6-1 with a 1.41 ERA in nine starts, and 25-year-old lefty Max Fried, who is 7-3 with a 3.68 ERA.
Mike Foltynewicz, an All-Star and 13-game winner last year, is 1-5 with a 5.89 ERA and has allowed 15 home runs, one shy of NL leader Kyle Freeland of Colorado.
Julio Teheran is 3-4 with a 3.28 ERA. Kevin Gausman, who is 2-5 with a 6.15 ERA, could be sent to the bullpen when Keuchel joins the big league roster.
___
More AP MLB: https://apnews.com/MLB and https://twitter.com/AP_Sports