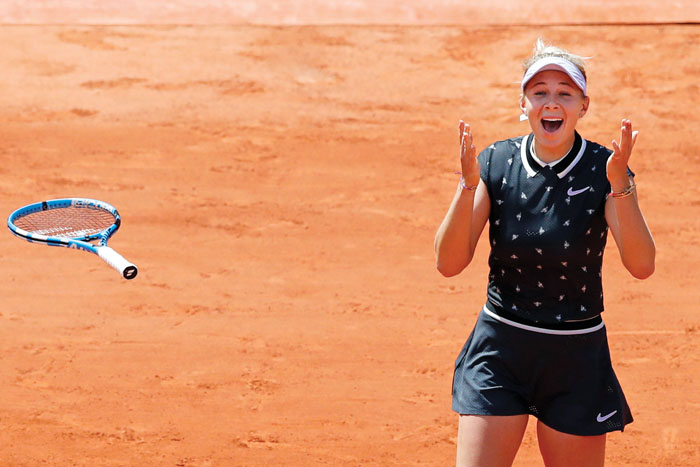 PARIS (AP) — Amanda Anisimova smacked one last backhand winner to complete her upset of defending champion Simona Halep in the French Open quarterfinals, flung her racket and covered her mouth with both hands.

Eyes wide, Anisimova then spread her arms with palms up and said, “What?!”

In a tournament filled with surprises, Anisimova provided the latest Thursday. Just 17 and ranked merely 51st, yet possessing the mindset and mien of someone much more experienced and accomplished, the American withstood a late charge by Halep and won 6-2, 6-4 to reach her first Grand Slam semifinal.

“I don’t think it will sink in, at least not for today. Yeah, I mean, it’s crazy,” said Anisimova, who was born in New Jersey to Russian parents and moved to Florida when she was 3. “I really can’t believe the result today. And getting the opportunity to play against Simona, that’s amazing. But how it ended is even crazier to me.”

That’s a fair assessment of the entire tournament. Serena Williams, No. 1 Naomi Osaka and No. 2 Karolina Pliskova lost in the third round; Angelique Kerber and Caroline Wozniacki were gone in the first.

The highest-seeded player in the semifinals is No. 8 Ash Barty, the Australian who will face Anisimova. Barty advanced by beating No. 14 Madison Keys of the United States 6-3, 7-5.

The other semifinal is No. 26 Johanna Konta of Britain against unseeded 19-year-old Marketa Vondrousova of the Czech Republic.

Because rain washed out all play Wednesday, the women’s semifinals — normally Thursday, one after another in the main stadium — will be played simultaneously on the second- and third-largest courts Friday morning. The biggest arena will host the men’s semifinals: Rafael Nadal vs. Roger Federer, and Novak Djokovic vs. Dominic Thiem. It’s the first time the top four men’s seeds are the last four standing at a major tournament since the 2013 Australian Open.

“Controlling the points was the key, I think,” said 2018 French Open runner-up Thiem, who made only 12 unforced errors, 25 fewer than Khachanov. “I didn’t miss a lot today.”

Not only has none of the remaining women won a Grand Slam trophy, none has participated in a major final.

“Well,” said Halep, who was seeded third, “nothing surprises me anymore in tennis.”

Already the first tennis player born in the 2000s to get to a Slam quarterfinal, she’s now the youngest U.S. woman into the semis at Roland Garros since Jennifer Capriati was 14 in 1990.

Anisimova or Vondrousova could each become the first teenager since Iva Majoli in 1997 to win the French Open, where the slow clay courts require patience from shot to shot, the movement and endurance to get to ball after ball, the smarts to construct points.

Anisimova certainly checked all those boxes Thursday. Facing a former No. 1 and major champ, in the tournament’s largest arena, the teenager was poised as can be.

“She was pretty calm,” said Halep, who acknowledged feeling the stress of trying to win a second consecutive title in Paris. “She showed that she’s able to do good things and big things.”

Yet to drop a set through five matches, Anisimova plays with a confident, take-it-to-the-opponent style. She doesn’t rely on power so much as precision, depositing what she’s called “effortless shots” near lines and often wrong-footing Halep.

And to think: It was in 2016 that Anisimova was the junior runner-up at Roland Garros at 14.

“I actually kind of miss juniors, but, I mean, this is a new phase,” she said, shrugging. “Obviously I respect (Halep) a lot. But I know I’m capable of doing a lot, and I know I can play very well. I mean, I never doubt my abilities. Today that showed.”

“For a 17-year-old to play that well,” said Chris Evert, who won seven of her 18 major trophies in Paris, “is pretty awesome.”

Most impressive, perhaps, was this: Halep had won 16 return games in a row coming in, but Anisimova saved 6 of 7 break points.

A seven-game run that began at 2-2 in the early going put Anisimova up a set and 3-0 in the second. But from 4-1, Halep made one last push, getting to 4-all.

“Nerves,” Anisimova said, “were kicking in a bit.”

In the next game, she pushed a backhand long and chewed on a thumbnail. That gave Halep a break chance, one point from serving to force a third set.

But it was Anisimova who steeled herself, Halep who stumbled. A forehand into the net, a return that sailed wide and another miscue by Halep let Anisimova hold, before she broke to end it.

DJOKOVIC HAS TENNIS HISTORY WITHIN GRASP AT THE FRENCH OPEN

PARIS (AP) — Sure, Novak Djokovic wants to win each match he plays. And, yes, he wants to come through at key moments, such as when he got broken early in his French Open quarterfinal and was in danger of dropping a set for the first time in the tournament.

What matters most to Djokovic, though, is the big picture. And so he’s excited to be two victories away from doing something only one other man, Rod Laver, ever has in tennis: holding all four major titles at once on two separate occasions.

“The longer I play or the further I go, I guess, in my career, the sense of history-making is only getting stronger. That’s one of the greatest motivations I have, obviously,” Djokovic said after a methodical 7-5, 6-2, 6-2 dismantling of Alexander Zverev on Thursday.

Djokovic already won four straight majors in 2015-16. And since his shocking loss to unheralded Italian player Marco Cecchinato in the quarterfinals last year at Roland Garros, Djokovic has compiled a 26-0 record at the Grand Slams, winning Wimbledon, the U.S. Open, and the Australian Open along the way.

“There is no better way to make history of the sport than to win Slams and play your best in the biggest events,” Djokovic said. “Those are the pinnacle achievements that you can have in our sport.”

Due to Wednesday’s washout, Djokovic will be back on the court without a day’s rest for Friday’s semifinals against Dominic Thiem.

In the other semifinal, 11-time French Open champion Rafael Nadal renews his rivalry with Roger Federer.

It’s the first time since 2011 that all top four seeds have reached the semifinals in Paris.

Even if Djokovic raises another trophy come Sunday, however, Laver will remain the only man to have won all four Grand Slams in the same calendar year twice, in 1962 and 1969.

Yet even Laver is awed by what Djokovic is accomplishing.

“I marvel at someone like Novak with his ability and his consistency,” Laver said. “When you look at the way he plays the game, he doesn’t go bang, bang, bang, ace, volleys. He wins every individual point from the baseline.”

With so much physical exertion, there was a moment against Zverev when Djokovic appeared out of breath after sending a backhand wide to give the fifth-seeded German a break and a chance to serve out the opening set.

But Djokovic found his second wind, started pushing Zverev back and forth to the corners like a windshield wiper, broke right back and reeled off five straight games to take the set and a 3-0 lead in the second.

“(I) really thought that the first set should have gone my way,” Zverev said. “Once he’s in control, he’s very tough to beat. He’s world No. 1 for a reason.”