David Freeze: Second day of trip to Alaska ends on a gravel bed 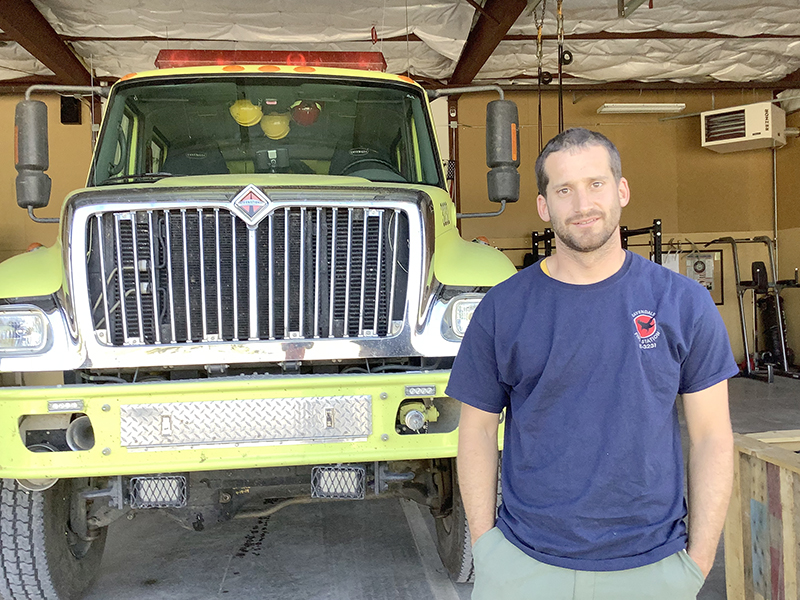 Photo by David Freeze - David met Ryan Rodd, a California firefighter, just after topping one of the climbs. Ryan attended UNCG and made David a PB&J before David pedaled on.

As I type this at 7:30 p.m. Wednesday, I am sitting in an abandoned building that used to be in the main part of town in Termo, California.

I had good Verizon connection here and wanted to take advantage to write my update.

Once I finished or get close, I planned to go north on U.S. 395 to a place where a California highway patrolman suggested I spend the night. But there was a fierce headwind, and I hoped it would die down in the meantime.

My previous night in the back of a pickup at the unusual campground went pretty well after everyone stopped driving around. I left without seeing the women who provided me a place to sleep, but I did leave them a note.

I left Doyle, California, and made good time on U.S. 395. I stopped at a rest area and looked at a map, realizing that I needed to take a shortcut just ahead. I came out at Milford and turned once again onto U.S. 395, cutting out a long, useless journey to a place called Susanville. I didn’t need to go there and saved about 10 miles per my Mapquest directions.

At a rest area, one of the workers told me about a great campground 40 or more miles away and along my route. When I stopped at a store in a community called Standish, Sam Porter and Matt Long from Susanville made me feel good that campgrounds were available. There might even be a motel, they said.

I left the store with my bags loaded to the hilt, ready for anything. What I got was a lot of climbing to gain more than another 1,000 feet and top out at just over 5,000 feet before things settled down.

The best story of the day was my large consumption of water because of the climbing and the heat. I was down to my last bottle and prayed for the ability to find water at a closed rest area. I was toast and could not have finished the day without it. Amazingly, a natural spring was still pumping water, and I drank more than 3 liters on the spot. Mixed with some oatmeal cookies, they provided more energy than I had all day.

When topping out a little higher (I’m not sure exactly how high), a Bureau of Land Management firefighter asked me if I was OK. I met Ryan Rodd, a firefighter who had graduated from the University of North Carolina at Greensboro and moved to California to pursue his vocation. Ryan made me a peanut butter and jelly sandwich. It was wonderful along with the extra water he gave me.

I was used up after pushing into the headwind through an afternoon of nonchanging scenery, but I planned to sleep in a quarry Wednesday night.

I thought I might find something in the communities Ravenwood or Termo. The only choice was an off-road campground with no water, which I didn’t take.

I was low on water again but first stop will be in a community called Lightly, which has a store. I think it’s about 20 miles away.

With 87 hard miles done Wednesday, I was ready for bed on a huge pile of gravel. Thanks for following along, and I will see you back here soon.