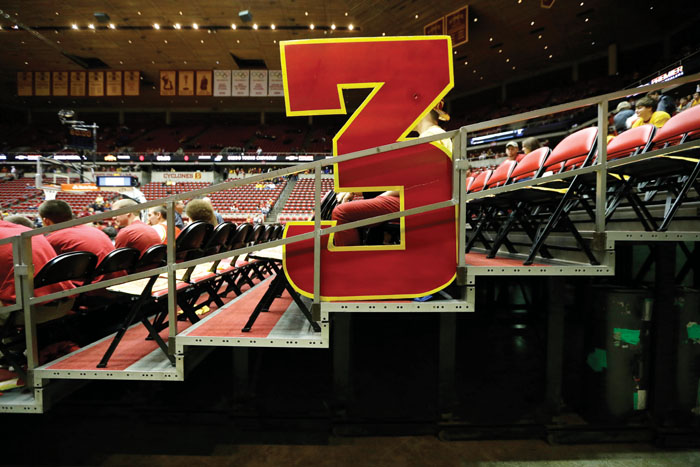 FILE - In this Jan. 17, 2015, file photo, a large 3-point sign sits in the stands before an NCAA college basketball game between Iowa State and Kansas, in Ames, Iowa. The NCAA Playing Rules Oversight Panel announced Wednesday that the arc will be moved to 22 feet, 1 3/4 inches for the 2019-20 season, matching the international distance. (AP Photo/Charlie Neibergall, File)

INDIANAPOLIS (AP) — The 3-point line is moving back in men’s college basketball.

The NCAA Playing Rules Oversight Panel announced Wednesday that the arc will be moved to 22 feet, 1 ¾ inches for the 2019-20 season, matching the international distance.

The change will not go into effect in Division II and III until 2020-21 due to the potential financial impact on schools.

The committee said the line was moved to make the lane more available for drives from the perimeter, to slow the trend of making 3-pointers so prevalent and to create more offensive spacing by requiring the defense to cover more of the court.

The international line was used on an experimental basis in the National Invitational Tournament the past two seasons. Teams attempted 23.1 3-point shots in the 2019 NIT compared to 22.8 in the 2018-19 regular season. The 3-point shooting percentage also dropped 2.2% to 33%.

The NCAA Women’s Basketball Rules Committee approved an experimental rule last month using the international 3-point line in postseason events outside of the NCAA championships in each division.

The panel also approved resetting the shot clock to 20 seconds after an offensive rebound and gave coaches the ability to call live-ball timeouts in the last two minutes of the second half and any overtime period.

Players also will be assessed technical fouls for derogatory language about an opponent’s race, religion, sexual orientation or disability.