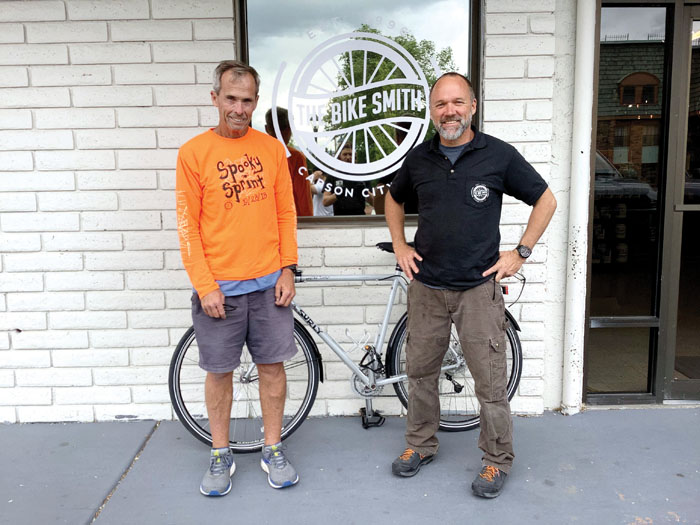 David stopped in Carson City, Nevada, last week to pick up his bike at Bike Smith. David is on the left with Mike Smith, owner, on the right.

With just two states to go before I cycle in all 50 states, I am going after one of them starting on Tuesday. Only Alaska and Hawaii remain and I will spend the next two months riding north to Anchorage. I have had great fun and many challenges through the other 48 states so far with every ride special in its own way. At present, this one could be the most exciting and challenging yet.

Tuesday begins about 3,200 miles on a mostly direct northerly route. Part of what makes this ride so exciting to me will be the remoteness almost throughout but especially in British Columbia and the Yukon. Chances of wildlife sightings will be the highest ever. There is a 546-mile stretch that has only only three small settlements and amazing scenery. Only Whitehorse in the Yukon is even close to being as big as Salisbury and nothing else has a significant population.

Mosquitoes and flies will likely be challenging. I bought a mosquito net to cover my helmet and my face. One of these would have been wonderful in Minnesota and Wisconsin.

Points of supply will be few and far north of Vancouver, British Columbia. With that, I will likely again be living out of convenience stores and using more room for food than usual. For the first time, I will filter water out of streams when bottled water is not available.

Starting in Nevada will probably include warm temperatures on through California, Oregon and Washington. As you might expect, some colder temperatures will show up later on the ride. With cold to come, I will have some winter clothes packed, but not many.

As always, I am self-supported, meaning that no one is riding along on another bike or in a vehicle. My Surly Long Haul Trucker arrived here last week and is ready to go. The bike got brand new high-quality tires and a new chain, all of which should be good for the distance.

My flights to Nevada didn’t go so well with a big delay on the first because of weather and a missed connecting flight. I spent a night in Phoenix after flying for the first time ever on that long five-hour flight in row 33, the very back one on the plane.

This trip will consist of two segments, the first being the ride to Anchorage. If all goes well on that portion, I will also ride back part way. With much of the riding in the remote area, I plan to camp more than on recent trips. Plenty of rules and suggestions involve how to handle my food in the wild, so as not to attract bears and other major wildlife. There have been lots of jokes and some very serious conversation about this over the last few days.

On most of my previous adventures, I have used cycling maps. None exist for this trip’s Canadian portion but I will be using a book called Milepost that denotes mile by mile what to expect.

If all goes well, I should hit Anchorage around July 12. Right now, I plan to rent a car for a few days in that area before heading back south on the bike. More on that later as it develops.

My daily reports will begin on Tuesday but will run in the Post two days later, so you can read that one on Thursday. This whole trip will be in the Pacific and Alaska time zones, meaning that a large portion of the writing, editing and printing time has been reduced. It will be 3-4 hours earlier than back in Salisbury and my days will continue to well past the time that all of it could be processed if I were on the east coast.

Also, connectivity in the remote parts of Canada especially will be difficult. I have both Verizon and AT&T and two small solar chargers to help with this,

The ride north begins again after my team participation in the Reno/ Tahoe Odyssey Run. That is 178 miles of high -ltitude running in Nevada and California over Friday and part of Saturday, all completed just before you read this.

As always, I look forward to hearing from the Post readers along the way. So far, we’ve had a lot of fun together and shared some great experiences, As always, send those prayers and I will rely on God’s hand being always nearby.

Check back Thursday as we get this big adventure underway.