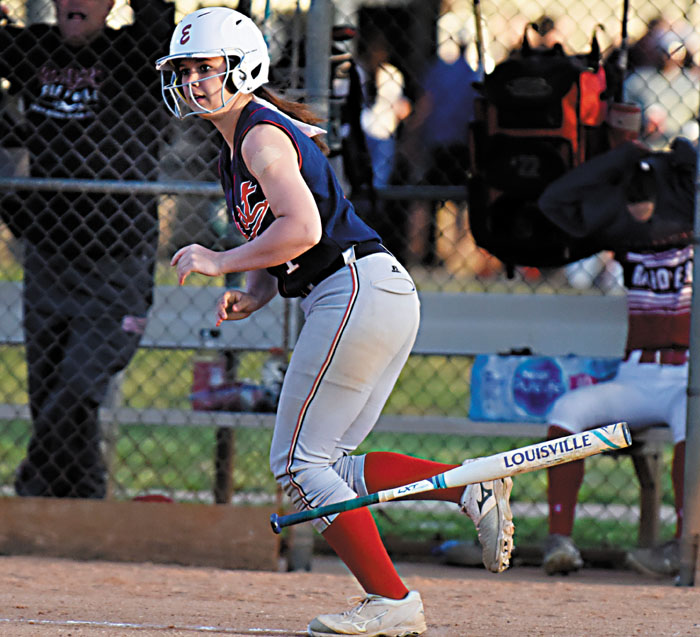 Wayne Hinshaw file photo/for the Salisbury Post ... East Rowan’s Maddie Trexler, shown during a game against South Rowan. Trexler recently announced that she will continue her education and softball career at Pfeiffer University.

There are some insane numbers that look impossible, starting with the .547 batting average and .633 on-base percentage that made her the ideal lead-off batter for the Mustangs.

“My biggest asset probably is speed,” Trexler said. “But I’ve also got some power. I get some triples and doubles.”

OPS, a  number that measures both the ability to get on base and to slug extra-base hits, reveals that Trexler was a special high school player. Her OPS as a senior was 1.414.  To put that number in perspective, the county’s most feared baseball slugger — Carson’s Luke Barringer — boasts an OPS of 1.221. Anything above .900 is killing it.

East head coach Mike Waddell explained that her stats could’ve been even crazier. He sat her down after playing one inning in blowout games against Albemarle, North Rowan and Statesville, so reserves would have a chance to get on the field.

“It was a very good year, and I was proud of all my teammates,” Trexler said. “Senior year, I just made up my mind to play my heart out every game. I wanted to go out with a bang.”

Trexler was East’s strongest offensive player, also leading the team with 29 runs, 15 walks, 17 steals (in 17 attempts) and four triples. Lead-off hitters don’t normally get a ton of chances to drive in runs, but she tied for first on the team in RBIs with catcher Mackenzie Sprinkle with 22. Sprinkle, who called the pitches for East, and Trexler were named co-MVPs for the Mustangs at Monday’s sports banquet.

“Maddie led off for us for four years,”  Waddell said. “Obviously, she’s been a very integral part of our offense. And our defense. She’s been our center fielder, but she also was able to fill in at shortstop last year after Caroline Johnson was hurt.”

Trexler will be playing college softball next season at Pfeiffer University. She had verbally committed to Louisburg when she was a sophomore, but Pfeiffer made a late recruiting push. Louisburg can offer athletic scholarships, while D-III Pfeiffer can’t, but Pfeiffer was able to put together a nice package for Trexler built around academic money.

“It all happened pretty fast and very recently, but Louisburg couldn’t match what Pfeiffer offered,” Trexler said. “There are advantages to going to Pfeiffer. It’s about 20 minutes from my family’s house in Rockwell.”

Pfeiffer is coached by fiery legend Monte Sherrill. He’s been able to make a successful transition as Pfeiffer has moved from D-II competition to D-III. The Falcons are still winning championships.

Trexler got started at age 6 as a T-Ball player. While her speed made her successful in other sports such as basketball, softball always was her favorite. On travel ball teams, she developed as a confident outfielder and a hitter with slapping ability.

She’s been very good at East and has been a member of the all-county first team since her sophomore year.

“She can slap, but she’s also a dangerous hitter,” Waddell said. “Teams have to change their defense against her, and she’s very good at reading that defense. We had some special signs for her, but usually we let her decide. She already knew what she needed to do based on how they were defending her.”

Trexler’s biggest hit of her senior season came in the North Piedmont Conference Tournament semifinals against Carson. Carson took a 1-0 lead to the seventh inning. East had two on base, but was down to its last out when Trexler stepped into the box. Trexler quickly got down in the count 0-and-2, but fouled off several pitches and worked the count to 3-and-2. Carson was playing her shallow and she tripled over the left fielder’s head to score the tying and go-ahead runs. East went on to win the game.

In the NPC championship game, a 4-1 loss to West Rowan, Trexler had a double.

She had another solid game in the playoffs, even though East (13-10) lost at Southwestern Randolph, 2-1, to close her career. She had a hit and scored East’s only run. She also made a sprinting, shoestring catch to stop a scoring threat.

Trexler also has had success playing on Rowan County’s Lady Legion softball teams. When Legion softball got started in the summer of 2017, she had the honor of getting the first hit in Rowan history. She had two triples on opening night.

There should be more triples and more shoestring catches in her college career at Pfeiffer. Academically, she’ll probably major in health and exercise science with an eye on a career in physical therapy.