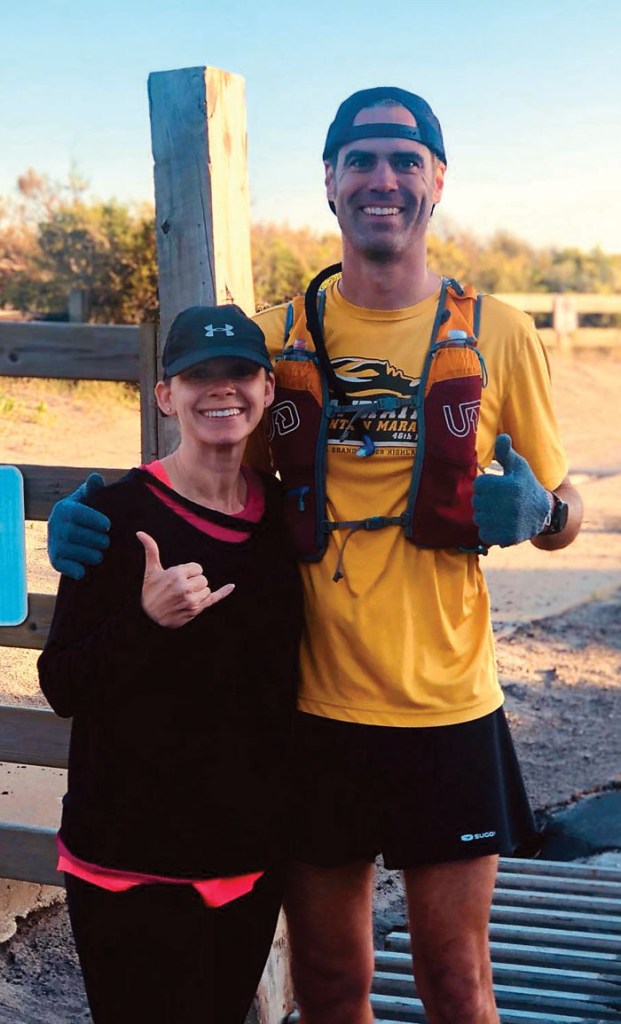 Jennifer and Kenneth Todd near the start of the OBX 200. Submitted photo

Yes, Kenneth Todd likes to run long distances, this time the entire length of the Outer Banks plus some. His course covered 200 miles from Corolla to Emerald Isle along Hwy 12 until it ends, then Highway 70 into Beaufort and onto Highway 58 to Emerald Isle. Attractions along the course included four lighthouses (Hatteras, Bodie, Currituck and Ocracoke), Jockeys Ridge, Wright Brothers Museum, Graveyard of the Atlantic Museum and wild horses on the islands. Todd completed the race on April 27-29.
Todd said, “I ran two 100 mile races before, but never a 200 miler, so that was the challenge. Could I run 60 plus miles for consecutive days? This was a great way to see the sights after last visiting the Outer Banks as a child.”

Jennifer Todd, Kenneth’s wife, and her sister, Amber Lail, took care of Todd’s needs along the way. He credits them with his ability to finish.
Plenty of special experiences included one runner, not part of the race, who jumped in to run with Todd for a few miles to start. That runner had finished two 50 milers and understood the experience. With the first 22 miles on the beach, Todd saw the wild horses on the beach near Corolla and especially loved the lighthouses, Currituck during the day, Bodie at night with the light rotating, Hatteras during the day and Ocracoke first thing in the morning.
A rough headwind hit Todd for the entire second day. Approaching Buxton, the dunes on both sides of the road were blowing so much sand that he wore a buff, a sock sleeve facecovering, and sunglasses to ensure not eating too much sand.
A unique challenge was the required ferry rides, one between Hatteras and Ocracoke and another between Ocracoke and Cedar Island. Hatteras to Ocracoke runs from 6 a.m. until midnight about every hour, not a problem to plan around. Ocracoke to Cedar runs only three times a day, 7:30 a.m., 12:30 p.m. and 4:30 p.m. Each runner had to develop a logistics strategy to hit that ferry efficiently.

Because of the windy but otherwise nice beach weather, many kite surfers could be seen from the road. Todd said, “Near Buxton, there must have been 50 in one small inlet, just neat to see.”
All the runners and the race director had dinner together on Friday night before the Saturday start.
Todd said, “This was the perfect opportunity to connect with all of them and share experiences. Everyone had great vibes throughout the journey.” Ten runners started and only four finished. Todd won the race.
He continued, “Jennifer and Amber were fantastic. At times, I asked them to go up the road just one mile, simply because I was not feeling good and wanted to make sure of access to hydration and calories. Jennifer, an RN, jumped into action to minimize the pain from a bad blister on the bottom of my foot that started on day 2. The heat was a factor and several times I asked them to turn up the AC in the car because I just wanted to sit in it!”
Day 1 included the first 60 plus miles from Corolla to Nags Head and plans to get some rest. Todd laid down, but really didn’t sleep for four hours and was back up at 1 a.m. to start day 2.
Day 2 was a long day that didn’t end until an Ocracoke hotel at 10:15 p.m., finally getting sleep from 11 p.m. until 5:30 a.m. On Day 3, Todd pushed on to the finish.
Todd said, “I was really tired afterwards, totally expected. The large blister will go away soon. And a bad shin splint has made my lower leg and ankle swollen, but that too will pass.”
Total time for Todd’s race was 66 hours, 44 minutes and 18 seconds. That included sleep, ferries, meals and everything else, an average of 20 minute miles. He said, “It was so good to see the finish at Emerald Isle and get that buckle. Many miles, rough patches, special times and then to see the light at the end of the tunnel was so rewarding.”
Upcoming goals include a marathon in every state and Todd, now 42, has just ten more states to go. He has scheduled a 100 mile race in September and will run with Jennifer for her first half marathon in December.

Todd concluded, “I am over the moon that I accomplished 200 miles. I think that they say only 1/10th of one percent of the population will finish a marathon (26.2 miles). How many have finished 200 miles….very few!” 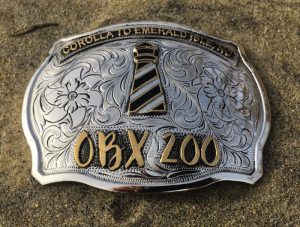 The buckle Todd received for winning the race.