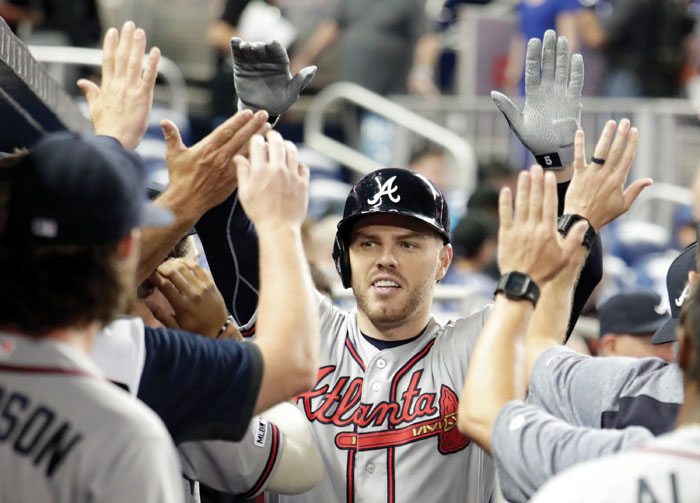 Atlanta Braves' Freddie Freeman is congratulated in the dugout after hitting a solo home run during the first inning of the team's baseball game against the Miami Marlins, Friday, May 3, 2019, in Miami. (AP Photo/Lynne Sladky)

By STEVEN WINE AP Sports Writer
MIAMI (AP) — Freddie Freeman and Brian McCann each homered to help the Atlanta Braves settle their score with Jose Ureña and beat the Miami Marlins 7-2 Friday night.
Braves right-hander Kevin Gausman was ejected in the second inning for throwing a 97 mph fastball behind Ureña, who was at the center of a melee between the teams last season. Touki Toussaint (2-0), recalled from Triple-A Gwinnett, replaced Gausman and allowed one run in four innings with six strikeouts.
Freeman hit his sixth home run in the first inning. He has 26 career homers versus Miami, the most he has hit against any team.
McCann hit a sacrifice fly in the fourth and a two-run homer in the sixth off Ureña, his second. Josh Donaldson, back in the lineup after missing three games with a calf injury, contributed three hits and three RBIs.
Gausman’s first pitch to Ureña was knee-high behind the batter, and plate umpire Jeff Nelson immediately signaled the ejection.
The game was Ureña’s first against the Braves since he was suspended for six games for intentionally hitting Atlanta’s Ronald Acuña Jr. on the arm with a pitch last August, triggering a bench-clearing confrontation.
Ureña (1-5) allowed five runs in six innings. In 15 career appearances against the Braves, he’s 2-7 with an ERA of 6.07.
Five Braves pitchers combined on a six-hitter against the Marlins, who are last in the majors in runs.
ALSO TOSSED
After Gausman departed, there was no further escalation of tension between teams. But Marlins manager Don Mattingly was ejected by Nelson in the sixth inning for arguing balls and strikes.
ROSTER MOVE
Before the game, the Marlins recalled from rehab and reinstated RHP Austin Brice (gastroenteritis) and optioned LHP Jarlin Garcia to Triple-A New Orleans.
UP NEXT
Braves: RHP Mike Soroka (2-1, 1.62) is scheduled to make his fourth start Saturday.
Marlins: RHP Trevor Richards (0-4, 4.64) is winless in six starts even though opponents are batting .218 against him.
___
More AP MLB: https://apnews.com/MLB and https://twitter.com/AP_Sports
___
Follow Steven Wine on Twitter: http://twitter.com/Steve_Wine