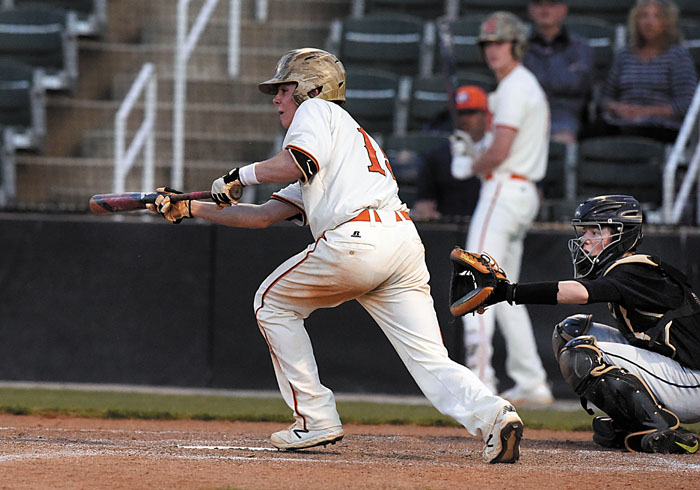 Carson's Zeb Burns (15) attempts to bunt during a game on Monday night in Kannapolis. ... File photo by Wayne Hinshaw, for the Salisbury Post

KANNAPOLIS — Carson’s team batting average is a modest .283 and the team has hit only three homers, but the Cougars win the same way most Chris Cauble-coached teams have won over the years — with pitching, defense and timely hits.

Carson (20-2) is having a phenomenal season in what was widely expected to be a rebuilding year. The winning continued on Tuesday with an 8-3 comeback against Piedmont in an Easter tournament semifinal at Intimidators Stadium.

Carson spotted Piedmont (9-14) two early runs, but scored three in the sixth and three more in the seventh to win going away. The victory was Carson’s 10th in a row.

A year after graduating stud pitchers Owen White, Maddux Holshouser and Cameron Prugh and two starting outfielders, Carson is ranked fourth in 3A and seventh in the state and has already been crowned North Piedmont Conference champion. Even with Cauble’s track record  — he’s been the head coach for more high school varsity baseball wins than anyone in county history — it was hard to see this coming.

In the preseason, Cauble talked up his new 1-2 pitching punch of Cole Hales (Coker) and Deacon Wike (Catawba), but they were still mound mysteries when this season began. Now they’re not. Hales won his seventh game in Monday’s first round. Wike won his sixth on Tuesday, going the distance.

Carson, the visitor, still trailed Piedmont 2-0 going to the top of the fourth. Veteran catcher Garrett Alewine broke the ice for the Cougars with a sac fly, but Piedmont got that run right back in the bottom half of the inning.

Shortstop Zeb Burns, who is batting a team-best .412, moved the Cougars within 3-2 in the fifth with a two-out, run-scoring double.

Wike put up a zero in the bottom of the fifth. Then the top of the sixth proved decisive.

Hales, who also has been a big part of Carson’s offense, tied the game 3-all in the sixth when his infield hit scored Jake Harris.

After Luke Barringer walked,  Logan Rogers delivered the game’s key blow, a two-run double for a 5-3 lead. The RBIs were the 15th and 16th for Rogers, a first baseman who is batting .356.

Rogers added an RBI single in the seventh.

Wike threw an even 100 pitches and only struck out three, but he survived a shaky start to throw another strong game. The eight hits he allowed were a season high, but only walked one and  he battled through it. His ERA actually went up a bit — to 1.36.

Carson’s offense, showing more punch in recent weeks, produced 14 hits, one of its stronger efforts of the season.

Lake Norman started a winning streak April 1. Like Carson, the Wildcats have now won 10 in a row.

Andrew Misenheimer (5-0) is the likely starter for the Cougars  tonight.