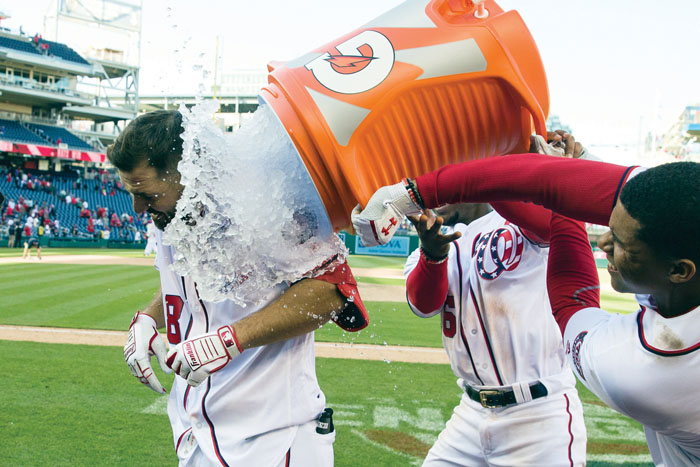 Washington Nationals' Jake Noll, left, gets doused by Victor Robles and Juan Soto, right, after a baseball game against the Philadelphia Phillies at Nationals Park, Wednesday, April 3, 2019, in Washington. Noll drew a walk to force in the winning run. The Nationals won 9-8. (AP Photo/Alex Brandon)

Noll was sent to the minors after the game to make room for utilityman Howie Kendrick to come off the injured list Thursday.

Robertson (0-1) gave up a leadoff single to Anthony Rendon, then walked three batters in a row.

Philadelphia fell to 4-1 — it had been the last team in the majors without a loss. Making his second appearance against his former team since signing a $330 million, 13-year deal with the Phillies, Harper hit a pair of singles and was walked three times, twice intentionally.

DeGrom extended the NL’s longest active scoreless streak to 26 innings. An infielder at Stetson University before he was converted into a pitcher, deGrom pulled the first pitch from Trevor Richards (0-1) in the third inning into the Mets’ bullpen for his second career home run.

PITTSBURGH (AP) — Tyler O’Neill capped another St. Louis rally by driving in Kolten Wong for the go-ahead run in the 10th inning against Pittsburgh.

Alex Wilson gave up a walk and a single in the ninth while getting his first save.

ST. PETERSBURG, Fla. (AP) — Chris Iannetta homered off Chad Roe (0-1) in the 11th inning, and Colorado stopped a four-game losing streak. Iannetta had the Rockies’ first hit since Raimel Tapia’s leadoff single in the fifth and second run in 41 innings.

Wade Davis (1-0) got four outs to complete a six-hitter.

Tampa Bay, which entered with a five-game winning streak, gave up one run or none for a team-record fifth straight game. The Rays have yielded 11 runs in seven games.

Carlos Rodon (1-1) gave up an unearned run and two hits over six innings.

Hanley Ramirez connected for a two-run homer in the ninth. He has both of Cleveland’s homers this season.

Whit Merrifield extended his hitting streak to 25 games, tied with George Brett and Mike Sweeney for third longest by a Royals player. Alex Gordon homered and drove in four runs.

Trevor May (1-0) threw 1 2/3 scoreless innings, and Blake Parker earned his second save in as many days.

TORONTO (AP) — Randal Grichuk took over from traded Kevin Pillar in center and hit a pair of solo home runs, a day after agreeing to a $52 million, five-year contract.

Matt Shoemaker (2-0) allowed two hits in seven shutout innings to help prevent a three-game sweep, and Ken Giles got two outs for his second save in as many chances.