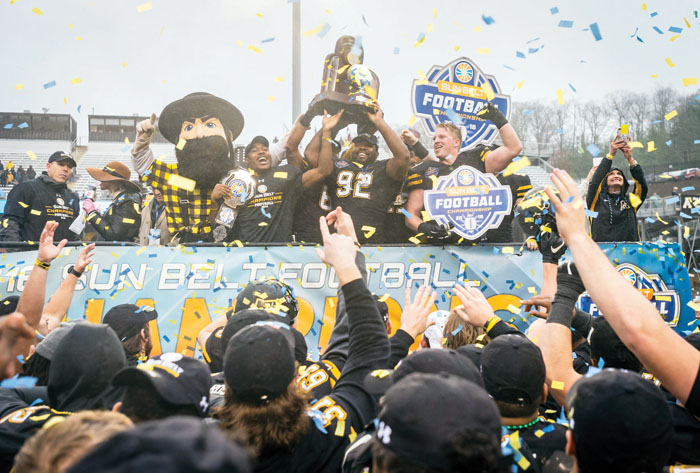 BOONE — Former Carson High School standout MyQuon Stout, who went on to star on the defensive line for Appalachian State, gets his chance today to impress NFL scouts.

App State hosts its Pro Day this morning in the Ricks Athletics Complex, another chance for several App State football standouts to confirm the interest they’ve already generated or make a strong impression in advance of the late-April draft and free agent signing period.

The day will begin with a meeting/testing session before continuing with running and skill activities. Pro Day is closed to the public, but results and information will be shared via appstatesports.com and various App State Athletics and App State Football social media accounts.

Stout, a two-time team captain and three-year starter at nose tackle, was the leader of a defense that ranked No. 4 nationally by allowing just 15.5 points per game in 2018.

In receiving the first official invitation to the Reese’s Senior Bowl and attending the NFL Scouting Combine in late February, Moore has been a running back prospect of note even after an ankle fracture and dislocation ended his senior season on Oct. 9. Since then, the 212-pound back has been working toward a complete recovery, and he ranked No. 2 among the 28 invited running backs with 27 reps on the 225-pound bench press at the NFL Scouting Combine.

Moore rushed for 3,570 yards, scored 34 total touchdowns and averaged a school-record 6.13 yards per carry during his App State career.
At last year’s App State Pro Day, NFL draft pick Colby Gossett received plenty of attention as he worked out in front of scouts and teammate A.J. Howard disappeared from view once the event concluded.

Representatives from NFL teams were conducting private interviews with Howard after a strong showing that helped him land in the league and become a Super Bowl champion as a rookie with the New England Patriots.

An early draft entry, Duck completed his junior season by being named a first-team All-Sun Belt cornerback for the third time. He intercepted 12 passes, made 158 tackles and totaled 324 punt return yards over his three seasons as a starter.

McMurry, a four-year starter at long snapper, was named a first-team All-Sun Belt pick by Phil Steele as a junior and senior. The Mountaineers had no blocked punts or field goals during a 2018 season in which the team ranked No. 8 nationally in net punting and converted 75 percent of its field goals.

Hayes was a three-year starter at cornerback with 33 career passes defended, including nine interceptions, and Flory made 183 tackles in his two years as a starting inside linebacker.
Exford excelled as both a hard-hitting standout on several special teams units as well as a safety who was named first-team All-Sun Belt by the PFF College site. Heath caught five touchdown passes for App State in 2018 after performing well as a receiver and returner at Kansas State for three seasons.

Basketball refs using clock technology to get it right