Veterans, patriotism, students the stars as 49 Days of Gratitude come to a close 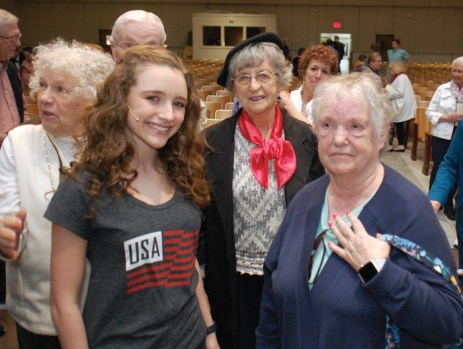 Mark Wineka/Salisbury Post Mallory Braun, left, a North Rowan High student who read one of the seven veteran soliloquies Saturday, stands with Marie Magaletti, right, who was a young child in England during World War II. In the middle is a fellow Trinity Oaks resident with Magaletti, Bea Hall. 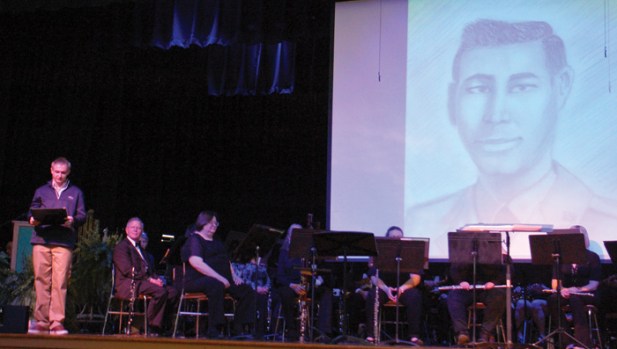 Mark Wineka/Salisbury Post Kevin Leichman does a soliloquy on U.S. Air Force veteran J.B. Brown, whose student artist rendering is to the right. Members of the Piedmont Prime Time Community Band listen in. 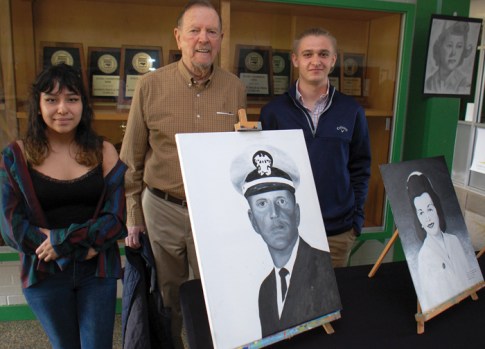 Some of the heaviest fighting in the Pacific Theater still lay ahead for the U.S. Navy, for whom Seamon was serving as a demolitions specialist often attached to the Marines. He would have enjoyed the leave, but he thought a buddy should take advantage of it instead.

His friend — it’s funny, he can’t even remember his name today — had never seen his little girl, born while he was away, fighting. Navy officials agreed to  Seamon’s transferring his leave days to the friend, who rushed back to California to see his little girl for the first time.

He told Seamon all about the visit when he returned in the early weeks of 1945. In a couple days, the men would be involved in the fighting at Iwo Jima, and that new father was killed.

Seamon looks back on it now and thinks giving up his leave was maybe one of the greatest things he has done in his life.

North Rowan High student Tsion Delaney spoke as if he were Seamon on Saturday during one of the seven student-delivered soliloquies on veterans at the 49 Days of Gratitude’s closing ceremony.

Taking place at the high school, the ceremony devoted much of its time to paying tribute to veterans, while also taking in the rousing and sometimes emotional patriotic songs delivered by the Piedmont Prime Time Community Band.

With the help of emcee Karl Hales and a well-produced video, the event also showed all the activities that had been associated with the 49 Days, including the kinds of materials and supplies collected throughout the seven weeks by 30 different donation box sponsors.

The box sponsors included individuals, couples, churches, businesses, schools and American Legions. More than 25 different non-profit agencies are the beneficiaries of those efforts.

Also on display in the North Rowan High lobby were portraits of veterans done by student artists and examples of the ceramic butterflies painted by Rowan County middle school students for The Butterfly Project.

More than 5,500 butterflies are eventually expected to be part of a permanent art installation, which will honor the memory of children who died in the Holocaust.

“Hardly a day went by without something happening” over the seven-week period, Hales said.

The 49 Days kicked off Feb. 9 with a Spencer parade and ceremony at the N.C. Transportation Museum.

The museum serves as home to what inspired this entire 49 days concept, led by Sherry Mason Brown and Kimberly Lentz.

This year marks the 70th anniversary of the Merci Train, or Gratitude Train, which was comprised of 49 boxcars filled with goods and personal gifts from the people of France.

The 1949 Merci Train — which had a boxcar for every state, plus one to be shared between Washington, D.C., and then territory Hawaii — was France’s thankful response to the Friendship Train of relief goods sent by U.S. citizens to Europe in 1947.

North Carolina’s Merci Train boxcar, a 40 & 8 model, is part of the permanent display at the Transportation Museum. The little boxcar became a symbol for the themes of World War II, French culture and gratitude that were celebrated during this first-ever 49 Days of Gratitude.

The men and women whose voices they became during their soliloquies included Seamon, the Navy veteran; Air Force veteran J.B. Brown, who flew spy missions during the Cold War; Howard W. Everhart, a Korean War-era veteran whose service included two years active and eight years in the Reserve; Vietnam veteran Lanny Merrell; Jack Connery, who had been a U.S. Navy officer for 21 years; Marie Magaletti, who was an infant in London when the Germans started their regular bombing raids; and Lois Kirk, a military nurse in Korea.

“If they were to ask me to go back today,” said Leichman, speaking as Connery, “I would do it without any hesitation.”

Magaletti was 2 years old when the bombing started in London. Her parents sent her to the country with her brother and other children to be out of harm’s way, but they eventually returned to London because her brother kept running away.

In the soliloquy read by Lashua, Magaletti remembers a German bomb that fell three blocks from their flat in London. The bomb never exploded. It was defused and remained in place as a reminder.

“We knew we were lucky,” Lashua said, speaking as Magaletti.

Many of the student readers and artists were able to meet with their subjects after the ceremony ended. Several posed together for pictures.

Anna Lara painted the portrait of the late Clyde Miller before he had died Feb. 9, while preparing to serve as grand marshal for the 49 Days opening parade.

Miller was a World War II veteran of the U.S. Navy and a beloved figure and leader in the North Rowan community. Hales paid a tribute to Miller during Saturday’s event.

“This has been a most amazing seven weeks,” Hales said.