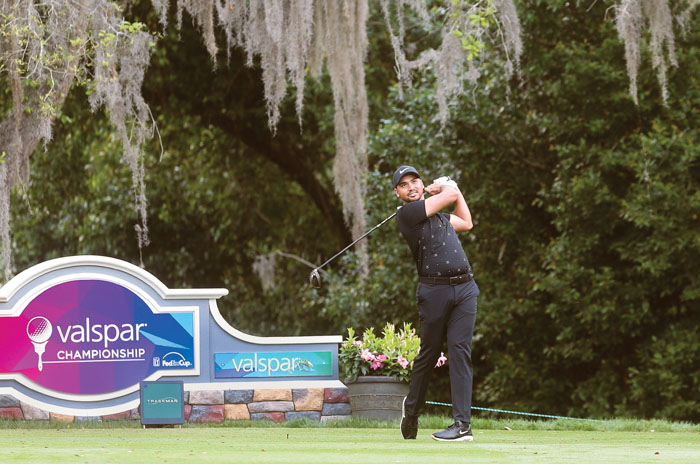 Jason Day drives from the second tee during the first round of the Valspar Championship golf tournament in Palm Harbor, Fla., Thursday, March 21, 2019. (Dirk Shadd/Tampa Bay Times via AP)

PALM HARBOR, Fla. (AP) — The PGA Tour event that doesn’t have Tiger Woods this year instead has the Leaping Cougar.

That’s a childhood nickname for Joel Dahmen, who took advantage of gentle, morning conditions Thursday on a tough Copperhead course for a 5-under 66 and a share of the lead with Austrian-born Sepp Straka in the Valspar Championship.

The tournament, trying to have a little fun during Spring Break in Florida, allowed players to put whatever name they wanted on the back of their caddie’s bib. Dahmen, a cancer survivor who keeps golf and life in perspective, went with the name he was given as a boy in Washington state when he was part of a scouts group.

His father brought some childhood memorabilia to the Phoenix Open. Dahmen saw the “Leaping Cougar” label, a tour friend got hold of it and the cat was out of the bag.

“I figured the rest of the world should see it this week,” Dahmen said.

Dahmen is playing a course he had never seen for the third straight week. But he has been playing well of late and considers himself a streaky player. Coming off a tie for 12th at The Players Championship, he handled Innisbrook with six birdies and a strong finish — a 6-iron to 4 feet for birdie on No. 3, a 7-iron to 5 feet on the par-3 fourth hole, a 20-foot birdie putt at No. 9.

The lead stood when the wind picked up in the afternoon. Of the 28 rounds in the 60s, only eight were in the afternoon. One of them belonged to Dustin Johnson, the No. 1 player in the world, who had not seen Innisbrook in nine years. He had a 69, with one birdie coming on the 578-yard 14th hole with a big drive and a 3-wood dead into the wind to 30 feet.

“I played a little bit better than my score,” Johnson said. “But first time being here in a while, not real used to the golf course … all in all, it was a good score. I felt the conditions were tricky.”

It was all part of an action-filled day at Innisbrook, where Russell Knox wiped out a double bogey on No. 9 by hitting 3-wood into the cup from 274 yards for an albatross on the par-5 11th, and riding that to a 29 on the back nine. He was one shot behind at 67.

And for the second straight week, Peter Uihlein saw the rarest shot in golf. He was standing on the 12th tee when he watched Knox’s ball roll onto the green and into the cup. Last week at The Players, Uihlein was in the same group when Harris English made an albatross.

The group at 67 included Kevin Kisner and Luke Donald, a former world No. 1 who now is No. 919, largely the product of a back injury that has limited him to just six tournaments worldwide in the past year.

Donald was tied for the lead until a bogey on the final hole from a tough spot in a bunker some 30 yards short of the pin on the 18th. And while it’s just one round, it’s a round he needed to see for his state of mind, much less his back.

“It makes your back feel better, actually, when you make a few birdies and hole a few putts,” he said. “It’s good for the soul. And it’s been a while since I had a really good round like that, and it does feel good. I felt very relaxed out there, which is somewhat unusual. The last year or two hasn’t really been that way.”

Woods played the Valspar Championship last year before enormous crowds and finished one shot behind, a key moment early in his comeback season that culminated with a victory. Woods didn’t return this year with The Players moving back to March and the Match Play next week in Texas, his final event before the Masters.

Innisbrook still attracted a strong field and a good crowd on a gorgeous day.

Defending champion Paul Casey opened with a 70, while Jon Rahm made his Innisbrook debut at 71. But even the easier morning conditions didn’t help Masters champion Patrick Reed, who had a 77, or Jason Day at 74.

Knox finished his front nine with a double bogey for a 38 until the albatross turned his fortunes. He added three more birdies to turn a rough start into an ideal one, especially considering the importance of these next two weeks.

He is No. 62 in the world, which gets him into the Match Play next week. He has two tournaments to crack the top 50 and get back to the Masters.

“Getting into Match Play was big,” Knox said. “I’ve been building a bit of momentum. The Masters has been on my mind since the first of the year.”