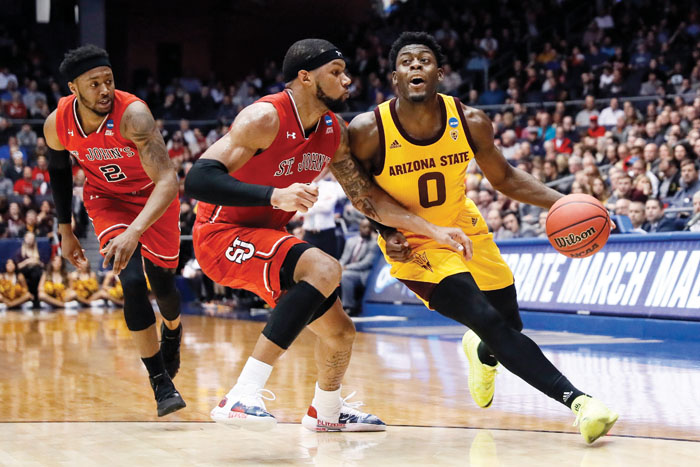 The 11th-seeded Sun Devils (23-10) will play Mid-American Conference champion Buffalo on Friday in the West Region, coming off their first NCAA Tournament win in 10 years.

The Pac-12 was 0-3 in the tournament last season, with two teams — Arizona State and UCLA — falling in the First Four. Arizona then got knocked out in the round of 64.

The Pac-12 got three teams in again this year, with Oregon and Washington joining the Sun Devils.

St. John’s (21-13) was the last team picked for the tournament, sneaking in despite a late-season fade. The Red Storm wound up one of the first ones out as well.

Arizona State’s physical defense brought the Red Storm to a halt. St. John’s missed 17 of its first 23 shots as the Sun Devils built an 18-point lead . A technical foul on coach Bobby Hurley as he argued over a blocking foul with 25 seconds left in the half helped St. John’s trim the deficit to 38-25.

Ponds had a steal and dunk as St. John’s cut the lead to 40-33 early in the second half while Dort was on the bench getting his lower right leg treated. The freshman guard landed hard after extending for a rebound and getting fouled. Mustapha Heron was called for a flagrant foul.

Dort returned and hit a pair of free throws and a layup that blunted St. John’s comeback. His fast-break layup rebuilt the lead to 16 points.

Ponds hit a 3-pointer as St. John’s made a final surge, cutting it to 62-55 with 3:58 left. Dort made a pair of free throws that helped finish it off.

St. John’s: The Red Storm opened the season with 12 wins, their best start since the 1982-83 season, but faded at the end, losing five of its last six.

Arizona State: Hurley won national titles with Duke in 1991-92 and has shown his team video of the Final Four when he thought it could use a boost. In his fourth season at Arizona State, he has led the Sun Devils to their first back-to-back NCAA Tournament appearances since 1980-81.

Arizona State heads to Tulsa, hoping to win two games in in the NCAA Tournament for the first time since 1994.