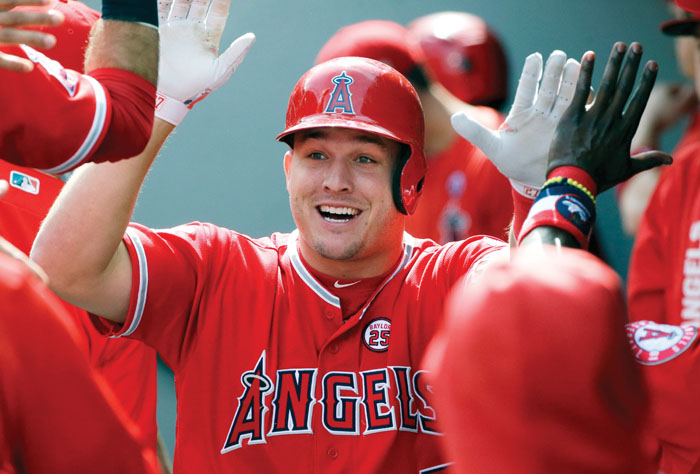 FILE - In this Sept. 10, 2017, file photo, Los Angeles Angels' Mike Trout is greeted in the dugout after hitting a solo home run in the first inning of a baseball game against the Seattle Mariners in Seattle. A person familiar with the negotiations tells The Associated Press Tuesday, March 19, 2019, that Trout and the Angels are close to finalizing a record $432 million, 12-year contract that would shatter the record for the largest deal in North American sports history. (AP Photo/Ted S. Warren, File)

Mike Trout is on the verge of becoming baseball’s first half-billion dollar man.

Trout and the Los Angeles Angels are close to finalizing a $432 million, 12-year contract that would shatter the record for the largest deal in North American sports history, a person familiar with the negotiations told The Associated Press.

The deal was disclosed Tuesday by a person familiar with the negotiations who spoke to the AP on condition of anonymity because the agreement had not been finalized. The contract was likely to be announced by the end of this week, the person said.

Trout would set a baseball record for career earnings at about $513 million, surpassing the roughly $448 million Alex Rodriguez took in with Seattle, Texas and the New York Yankees from 1994-2017

“I’m pretty sure I ain’t paying one more dinner for him,” said fellow Angels star Albert Pujols, in the midst of a $240 million, 10-year deal. “It’s well deserved. I don’t think there’s anybody in baseball besides him who deserves that.”

Progress toward an agreement was first reported by ESPN.

Whether Trout’s contract is the largest in the world for a team athlete is difficult to determine. Forbes estimated Lionel Messi earned $84 million from Barcelona in 2017-18 and Cristiano Ronaldo $61 million from Real Madrid, but precise details of their contracts are not known.

“You think about Angels, you think about Mike Trout,” Los Angeles shortstop Andrelton Simmons said, “You locked up the best player in the game. That’s a big first step to take. You can build off of that. That’s a good base to the house.”

Trout’s deal would include a signing bonus and supersede the $144.5 million, six-year contract that had been set to pay him $33.25 million in each of the next two seasons.

While the marketplace has been slow for many players this offseason, prompting complaints from the players’ association, top stars have gained robust deals. Four of the largest seven contracts will have been agreed to since Feb. 19, with Trout and Harper joined by Manny Machado ($300 million for 10 years with San Diego) and Nolan Arenado ($260 million for eight years with Colorado).

A 27-year-old entering what should be his prime years, Trout is considered baseball’s top player and would have been coveted as a free agent after the 2020 season. He lives in southern New Jersey, and Harper said he was excited about trying to recruit Trout to join him in Philadelphia.

Although Trout recently built a home in his native Millville, New Jersey, he is staying on the West Coast with the Angels, who are coming off three straight losing seasons and haven’t won a playoff game during his career.

Trout and wife Jessica have made no secret of how much they enjoy living in laid-back Southern California, and the low-key outfielder decided to skip the pressure of free agency entirely.

Trout has been an All-Star in each of his seven full big league seasons and hit .312 with 39 homers, 79 RBIs, 24 steals and 122 walks last year. He led the major leagues in OPS in each of the last two seasons.

Big-money deals have not worked out for the Angels in the past. Pujols reached his big deal with the Angels before the 2012 season but has not matched his previous performance with St. Louis. Josh Hamilton signed a $125 million, five-year contract before the 2013 season and contributed just 31 homers and 123 RBIs in two years with the Angels.

Trout is viewed differently as a home-grown Angels player and forms a core with Japanese star two-way player Shohei Ohtani, who is recovering from Tommy John surgery. Ohtani is expected to be able to hit for the Angels at some time in the first half of the season and to resume pitching in the 2020 season.

Trout has reached the playoffs just once, when the Angels won the AL West in 2014 and were swept by Kansas City. Los Angeles is coming off three straight losing seasons, and Brad Ausmus replaced Mike Scioscia, the team’s manager since 2000.

Los Angeles has a lucrative television contract, a fan base that has packed Angel Stadium with 3 million fans for 16 consecutive seasons and an owner in Arte Moreno who rarely hesitates to spend. The Angels’ farm system has improved sharply during general manager Billy Eppler’s three-year tenure.