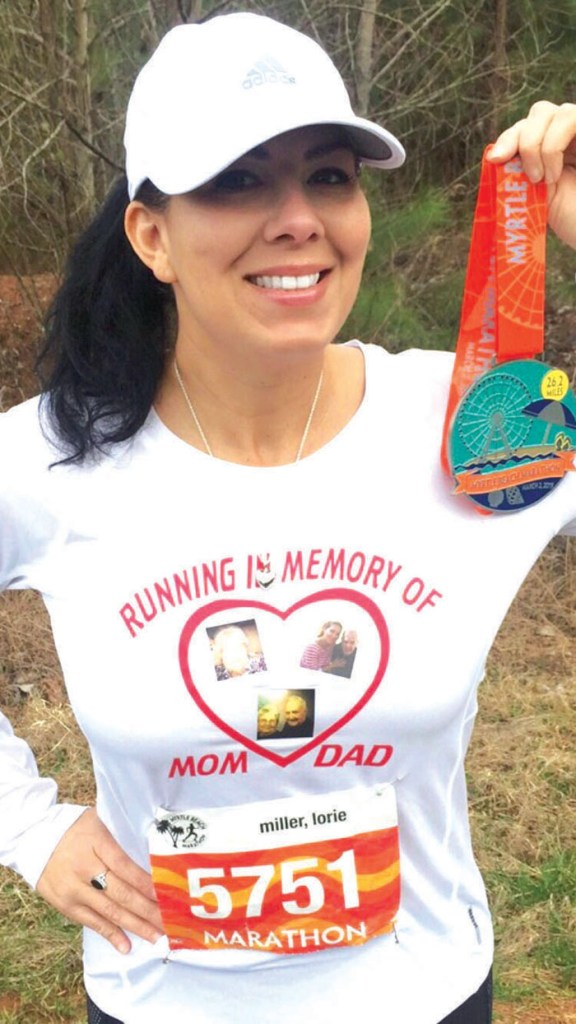 Lorie Miller, wearing the shirt that honored her mom and dad as she completed the Myrtle Beach Marathon. Submitted photo.

Last fall, we were timing the St. Matthews 5K when Lorie Miller asked me to help her train for a marathon. I didn’t know her well, but I could tell there was a bigger story. What struck me was her reason for wanting to commit to marathon training when she was at best only a casual runner. Here is Lorie’s story.

Lorie described how she began running. She said, “I got bored with my normal workout routine. A friend suggested giving running a try. I downloaded the Couch to 5K app and started running. I learned that I loved running outdoors, especially during the beautiful sunrises and sunsets. My first race was Run for the Greenway on July 19, 2014 and I placed in my age group. I caught the running bug, which led to the Sunset 5K, UMW Run/Walk for Missions 5K, Resolution 5K, Nutrithon 8K, Butterball 5K, St Matthews 5K. After taking some time off to care for my parents before they both passed away, I was ready to get back to running.”

Lorie is 42 years young and has been at F&M Bank for 15 years. Other interests include mud runs (Warrior Dash, Rugged Maniac, Bonefrog), hiking, kayaking, zip lining, whitewater rafting, traveling and anything outdoors.

The real story is why Lorie decided to do a marathon. Training for one is a huge time commitment and quite mentally and physically challenging, way past anything she had done before.

Lorie said, “After losing my mother in August (my father a year and a half prior), I decided I needed a positive focus to carry me through the holidays. My life changed dramatically, and I knew I needed to focus on devotions with God and I decided that a marathon would be my goal honoring my parents, both of whom struggled with things we take for granted… breathing, walking. I wanted to do it for them.”

I asked Lorie to describe her training. She said, “It was hard. I trained mostly alone but I pushed because my parents were strong until the end and never gave up. I kept that at the forefront of my mind. I knew I had that same strength and I tapped into it. I cried, I was tired, it was horrible weather all winter, I hurt but I couldn’t quit. Quitting was not an option. Never!”

She completed the Mayberry Half Marathon November 2018 as part of marathon training. Lorie jumped ahead of her training plan early and was doing fine.
There were issues, probably brought on by the added mileage. Lorie was sure she had a knee problem, but in fact she had a very common IT band syndrome. Proper stretching and ice helped.

Her later training was limited, but race day arrived quickly. The Myrtle Beach Marathon was held on March 2, just a couple of weeks ago. She said, “The race was full of excitement. I couldn’t believe that I was there running a marathon. I just kept focusing on getting to the next mile and the next mile. Before I knew it, I was at mile 20 and had to dig deep. This is where people hit “the wall.” I kept pushing, heavy legs, achy knees… one foot in front of the other. I remember telling myself, “It’s ok to die but you can’t quit!”

I turned up the music my parents listened to, cried and pressed on, and finally crossed that finish line. I was so happy and so worn out at the same time.”
Lorie’s time was 5 hours, 36 minutes and 31 seconds.

Lorie described her next goals, which included running the Love Thy Neighbor 10K yesterday, March 16, 2019 to complete her 5K, 8K, 10K, half marathon and full marathon goal agenda. She said, “I will continue 5Ks and would like to run a fun run with my 5 year old great-niece so that she can have a medal of her own. She loves wearing mine. Possibly a few half mzarathons but as far as full marathons go, that was my one and only. I feel any more would take away from my reason for doing the marathon in memory of my mom and dad.”

Spring racing is here. Look for the Lamb 5K in Mooresville and the Mt. Hope 5K at Salisbury Community Park the next two weekends. Both are well managed races. These events and others are at www.salisburyrowanrunners.org

Fiction is about yearning, finding order in chaos