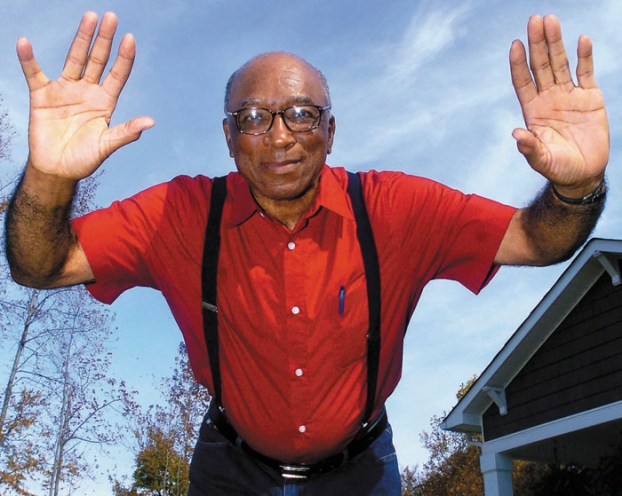 Brett Clark/Salisbury Post file photo ... In a file photo from 2005, Ernest “Mr. Touchdown” McCray poses outside his home. He was a star of Price’s 1952 state championship team. McCray was 85 years old when he died last Monday. 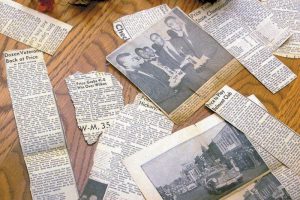 Brett Clark/Salisbury Post file photo …
Ernest “Mr. Touchdown” McCray laid out all his newspaper clippings on a table when the Salisbury Post visited him in 2005.

SALISBURY —There have been thousands of football players in Rowan County, but only one was known as “Mr. Touchdown.”

Ernest McCray died on Monday at 85 and was laid to rest at Rowan Memorial Park on Saturday.

Most who knew him in Salisbury knew him, not as “Mr. Touchdown,” football hero, but as Captain McCray.

That was his rank with the Salisbury Fire Department. He became the highest-ranking black person in that department when he was elevated to captain in 1984. He retired as a captain in 1999.  Captain was as far as he wanted to be promoted. He didn’t want to take any chances on being assigned to a desk.  He wanted to stay with his engine company.

He was a Salisbury firefighter for 31 years.

Before that, he did admirable things during 10 years of service in the U.S. Navy. He was credited with saving a life in 1961 when he was stationed in Puerto Rico aboard the missile cruiser USS Canberra. A man fell overboard in the dark, in rough seas, and McCray happened to be returning from shore in a craft filled with supplies. He was in the right place at the right time and steered his boat close enough to the frightened sailor to make the rescue.

Before the Navy, McCray was “Mr. Touchdown.”

McCray played high school football from 1950-52 and graduated from Salisbury’s J.C. Price High in 1953. The school was located near Livingstone College.

The football of that era was different. Games were lower-scoring. A scoreless tie — no overtimes were played — was not unusual.

It was usually 11 very tough young men playing both ways. The game was played by teens much smaller than the ones we watch now. McCray, who played fullback and linebacker at 185 pounds, was a big athlete for the time, larger than many of the Price linemen. He enjoyed playing linebacker even more than he did running the football. It was more fun hitting, than being hit.

McCray played in a time of all-black and all-white schools.  Along with more than 100 other black schools, the J.C. Price Red Devils, coached by S.W. “Prof” Lancaster, competed in the North Carolina High School Athletic Conference.

Price was one of the super teams in the state in the 1940s, but McCray’s three seasons were the last dominant years for Price football. It was a golden era in which the Red Devils won 22, lost one and tied two.

As a senior in the fall of 1952, McCray took center stage for two of the celebrated games in Price’s distinguished history — the revenge game against Hickory’s Ridgeview High and the legendary 2A state championship game against Tarboro’s Patillo High.

But to get to 1952, you have to start with 1950. Price had a magnificent team that year, with players such as  Wade Jones, Theodore Bush, Roy Burney, John Chambers, George Alexander and George Gillispie. Price had the best black football team in western North Carolina — 7-0 in the regular season, including a 47-0 destruction of Kannapolis’ Carver High.

The North Carolina High School Athletic Conference had not moved to classifications yet. Every school was competing for one state title. Price was supposed to take on West Charlotte in its season finale, but that game was canceled so Price could make the trip to take on Raleigh’s Washington High at Chavis Field for the state championship.

Washington was still Raleigh’s only school for black students in 1950, so it was huge compared to Price. McCray recalled that Washington’s linemen outweighed the Red Devils by 30 or 40 pounds per man, but it was still a struggle. The Raleigh team finally prevailed, 14-0.

Price was even better in 1951. A role player as a sophomore, McCray blossomed into a star as a junior. That was the season he got his nickname.

There was a two-week stretch early that season in which McCray scored six of the Red Devils’ eight touchdowns in hard-fought wins against Kings Mountain’s Lincoln High and Statesville’s Morningside High. After his amazing pick-6 in the Statesville game, he was known as “Mr. Touchdown.”

There were three more McCray TDs in Price’s 70-0 romp against Jones High of Mount Airy. The Mount Airy team only kicked off once. “Mr. Touchdown” took it to the house.

Price stood 6-0, but that season ended with two scoreless ties against rugged rivals — Lexington’s Dunbar High and West Charlotte. The West Charlotte game left a number of Red Devils bruised and battered. McCray intercepted a pass at the Price goal line in the final minute to keep it 0-0.

Price was 6-0-2. Hickory’s Ridgeview High also was unbeaten. This was the first season of classification football for the NCHSAC, and commissioner Dr. Wiley “Army” Armstrong had to render a decision. There wasn’t time for Price and Ridgeview to play each other, so he could only send one to the 2A state championship game against Nash Training School. Price had represented the West in 1950, so Ridgeview got the nod.

Ridgeview lost a close game to Nash. Price ended the 1951 season undefeated, but without a championship. Price started basketball practice.

Coach Lancaster could have griped and complained about the unfairness of it all, but he didn’t. His response was perfect. He scheduled Ridgeview for the 1952 season. The Hickory school agreed to come to Salisbury.

With “Mr. Touchdown” running wild, Price was close to unstoppable in 1952. Price outscored its first four opponents, 122-6. Then Ridgeview came to town for perhaps the most hyped game in Price history.

McCray scored three touchdowns as the Red Devils routed Ridgeview, 48-0, but he preferred to talk about Price’s defense. Ridgeview never reached midfield. A Price lineman ran a punt back 75 yards for a touchdown.

That stellar performance would propel unbeaten Price all the way to the 2A state title game. It was played over at Boyden High, the white school in Salisbury. It was late November, bitterly cold. Price’s starting quarterback William Hickman was ejected early for making a big hit on defense. The second-string QB couldn’t move the team, so Lancaster tapped the third-stringer, who had never been in a varsity game, on the shoulder. Jimmy Holmes directed the Red Devils to victory. He handed off to McCray and right halfback George Alexander.

On the drive that gave Price a thrilling 13-7 victory and Lancaster’s second state title (the Red Devils had also won in 1940), McCray made a fantastic run to  get the ball to the 1-yard line. Alexander put it in the end zone.

McCray’s football career ended early at North Carolina Central. He was in his first semester there when a draft notice arrived from Uncle Sam. He took his U.S. Army physical, but his father had been a Navy man, and so he decided to enlist in the Navy.

He liked the Navy so much, he re-enlisted. That’s why he stayed 10 years.

The Navy would lead to the Salisbury Fire Department. He carved out a remarkable career there, but to the old-timers he was still “Mr. Touchdown.”

The J.C. Price Red Devils are long gone. The school closed in 1969, 50 years ago, as full integration came to Salisbury’s schools.

But red is still present in Salisbury High’s uniforms. A tribute to players like “Mr. Touchdown.”

Dillon wins pole at Fontana after nobody finishes final lap