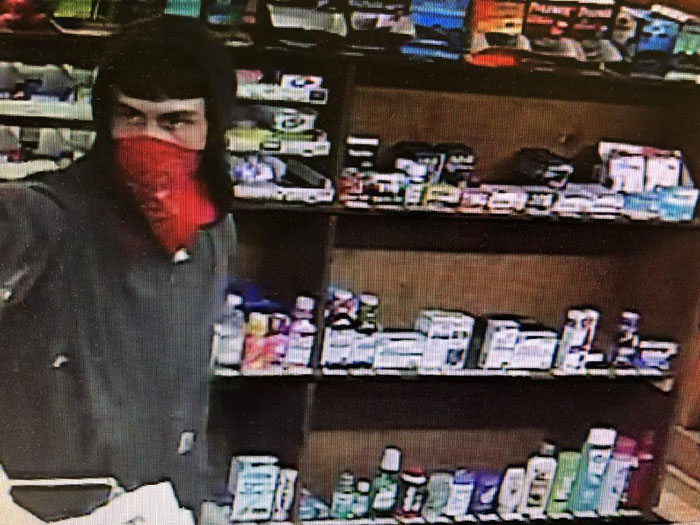 This is a surveillance image of the man suspected in convenience store robberies.

SALISBURY – Three law enforcement agencies are looking for a man involved in robbing two convenience stores and the attempted robbery of a third.

He tried to rob the store, but got nothing, Overcash said.

Anyone with information is asked to contact the China Grove Police Department at 704-857-7755.

About 45 minutes after China Grove reported the attempted robbery, the Salisbury Police Department received reports of a 5 a.m. robbery at the Rushco convenience store at 932 S. Jake Alexander Blvd., near Interstate 85 and Klumac Road.

A man wearing a jacket and a red bandanna similar to what the suspect in the first robbery wore robbed the Salisbury store at gunpoint.

The man is described as being in his 20s with a slim build and clean-cut dark hair. He demanded money from the clerk, who complied and left the store on foot. The clerk was unharmed.

Police say anyone with information on the Rushco robbery is asked to contact Salisbury police at 704-638-6333 or Salisbury-Rowan CrimeStoppers at 866-639-5245.

Deputies used a K-9 unit to track the suspect to an area near the store, but it appeared he had left in a vehicle. Detectives from the Sheriff’s Office gathered evidence, including the store’s security video.

The robber was dressed in a hooded shirt with a red scarf hiding his face. He was armed with a handgun. The suspect appears to be a white man with a slim build and in his early 20s, with clean-cut dark hair.

Sheriff’s and police detectives met to compare information from both crimes.