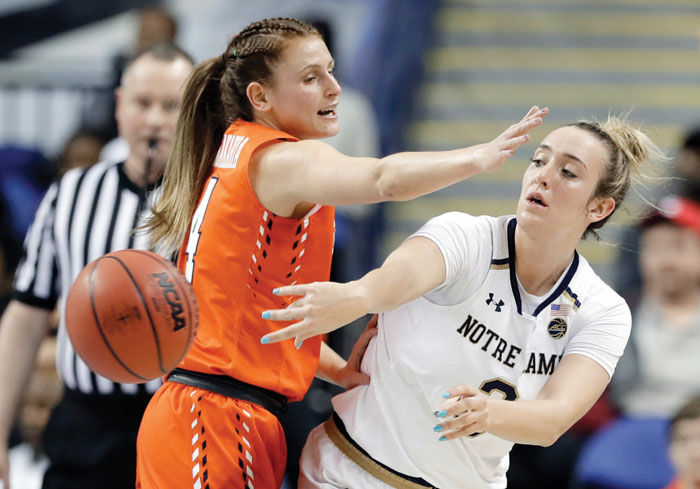 GREENSBORO (AP) — The Atlantic Coast Conference hasn’t been able to hold a championship game lately without Notre Dame. Now the Fighting Irish want to get back to winning them again.

Jackie Young had 18 points and 13 rebounds, and No. 4 Notre Dame advanced to the ACC title game by routing No. 18 Syracuse 91-66 on Saturday in a semifinal.

Jessica Shepard added 16 points and 12 rebounds, and Marina Mabrey finished with 16 points to help the top-seeded Fighting Irish (29-3) reach their ninth straight conference final — a run that includes all six years they have been in the ACC.

Notre Dame lost to Louisville in last year’s title game, and Young says that defeat still stings — even after the Irish regrouped to win the national championship.

“This is what we’ve been looking for,” Young said. “We all know what happened last year.”

Tiana Mangakahia scored 14 points and Gabrielle Cooper added 12 to lead fifth-seeded Syracuse (24-8). A day after making an ACC Tournament-record 14 3-pointers in a quarterfinal upset of No. 15 Miami, the live-by-the-3 Orange were 8 of 23 from long range against the ACC’s best 3-point defense.

Mangakahia pulled Syracuse to 55-44 with a layup with 4½ minutes left in the third, but the Irish put the game away by scoring 13 straight points, with Young’s three-point play with 1:59 left in the period stretching the lead into the 20s for good.

Brianna Turner had 14 points for Notre Dame while Arike Ogunbowale, the ACC’s leading scorer, added 12 points on 5-of-18 shooting.

Syracuse: No ACC team lets it fly from 3-point range quite like the Orange, who entered having attempted a league-most 867 3s — nearly 100 more than any other team.

Notre Dame: The last time the Irish didn’t reach a conference final was in 2010 when they were knocked out of the Big East Tournament in the quarterfinals. They improved to 16-1 all-time in the ACC Tournament and won their 21st in a row in the series.

GREENSBORO (AP) — No. 3 Louisville found itself in another tight tournament game against a team it embarrassed not long ago. The Cardinals leaned on seniors Asia Durr and Sam Fuehring to lead the way — and now they’re headed to another championship game.

Durr scored 22 points, and Louisville advanced to the Atlantic Coast Conference Tournament final by beating No. 9 North Carolina State 78-68 on Saturday in a semifinal.

Fuehring had 14 points and 12 rebounds, and Arica Carter had 16 points to help the second-seeded Cardinals (29-2, 14-2) win a back-and-forth game in which both teams led by double figures. Durr and Fuehring combined to score Louisville’s final 12 points over the final 7½ minutes.

“We were just trying to find a way to score,” Durr said. “Score, then get a stop.”

They earned a rematch with No. 4 Notre Dame (29-3, 14-2) in the title game. Louisville beat the Fighting Irish 74-72 in last year’s final, giving Notre Dame its only loss in six years at the ACC Tournament while claiming its first league title since the Cardinals won the Metro in 1993. The Irish won the only regular-season meeting 82-68 on Jan. 10.

“They’re really fun to watch when you don’t have to play them,” Louisville coach Jeff Walz said.

Elissa Cunane scored 20 points, Kai Crutchfield had 17 points and DD Rogers finished with 13 for the third-seeded Wolfpack (26-5, 12-4). They shot 51 percent but had 17 turnovers that the Cardinals turned into 28 points.

Durr scored eight points during a 15-4 run that gave them the lead for good, capping it with a jumper that made it 72-61 with 5½ minutes left. N.C. State chipped away, closing to 74-68 on Rogers’ free throw with 56.2 seconds remaining, before Fuehring and Durr each hit two free throws to stretch the margin back to double figures.

N.C. State: The depleted Wolfpack — who have lost three players to season-ending injuries — could have packed it in after blowing an early 10-point lead and allowing Louisville to score the final 19 points of the first half. To their credit, they figured out a way to manufacture a run of their own, scoring on 10 consecutive possessions to retake the lead on a team that beat them by 30 points nine nights earlier before running out of steam while playing their second game in 18 hours.

“We can rotate and manage with one starter out … but when we have three, it’s tough,” coach Wes Moore said. “We just don’t have the depth to handle that.”

Louisville: The final ACC game for the Cardinals’ senior class of Durr, Carter and Fuehring will be for a league championship. The winningest class in school history improved to 120-21 over the past four years — the fewest losses by a four-year class and the best winning percentage in school history.

Louisville’s two tournament wins have come by a combined 18 points over Clemson and N.C. State. The Cardinals previously beat both of those teams by at least 30 points. Walz said Louisville’s 92-62 romp over the Wolfpack on Feb. 28 “was not going to repeat itself.”

Durr began the day as ACC’s second-leading scorer — a tenth of a point behind Notre Dame’s Arike Ogunbowale, who averaged 21.6 points per game. But Ogunbowale scored just 12 points in a victory over Syracuse in the first semifinal, and that dropped her to 21.3 points per game while Durr’s average held steady at 21.5 points after hers.

N.C. State: Will spend a couple of weeks waiting for Selection Monday.

Louisville: Faces Notre Dame on Sunday in the title game for the second straight year.

No. 5 Tennessee falls in regular-season finale