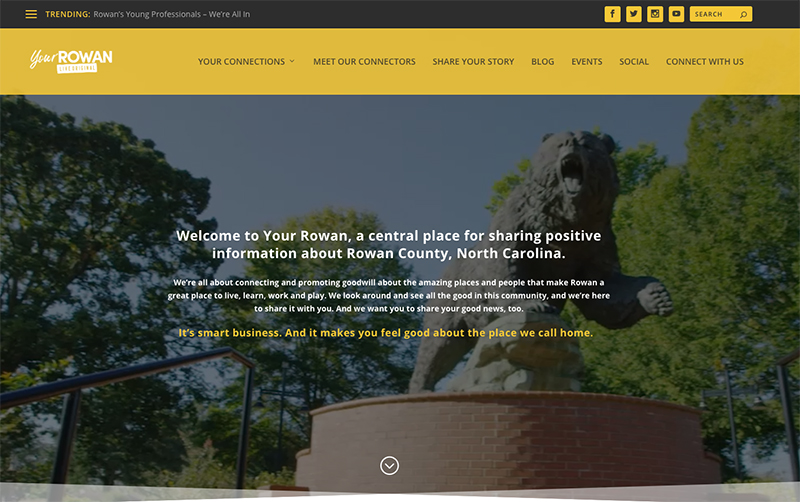 SALISBURY — Launching Monday, a news blog and marketing campaign will use county funding to focus on “connecting and promoting good will” about why Rowan County is a great place to live.

The blog site — called “Your Rowan” — will publish opinion columns online by eight people who have each been assigned a topic area, including arts, attractions, High Rock Lake, green spaces, education, municipalities, business and health, said Mike Miller, whose firm Miller Davis will oversee the project.

Your Rowan also plans to make social-media posts and stream live videos on Facebook. And, Miller says, his firm will pitch stories about things in Rowan County to publications such as Our State and Southern Living magazines.

The blog site is the product of an effort called “Growing Rowan,” which kicked off in 2017 and launched several subgroups, and findings presented by branding consultant Steve Chandler.

Chandler said people living in Rowan County do not think as positively as they should about the place where they live. Chandler’s firm was hired in 2015 to complete Rowan County’s rebranding.

“If we can believe in ourselves — in our community and what all it has to offer to people — I think we will be better positioned to attract more people and to increase our own prosperity,” Dibley said. “I hope this effort will show us all what we have to be proud of and give us the enthusiasm to look at our county with new wonder and delight.”

County Commissioners Chairman Greg Edds cited the county’s branding study started in 2015 as proof that the internal marketing is needed. Of respondents to a survey completed during the branding, 40 percent said they had a positive view of the county, 10 percent had a negative view and 50 percent didn’t know enough to form an opinion.

“In addition to working hard to greatly improve our community, we felt it was vitally important to communicate to folks, both inside and outside of Rowan, the great things that are going on that makes our county such a wonderful place to live,” Edds said in an emailed statement.

Like communities across the country, Rowan “took it on the chin” during the recession that started in 2008, Edds said.

“But unlike most of those communities, Rowan has all of the ingredients it needs to become the envy of the region,” he said. “Reminding folks of that fact is important.”

Called “connectors,” Your Rowan has selected the following people to serve as its bloggers and social-media influencers for the project:

Miller said the project is looking to add more “connectors” to the group.

In a contract between the Rowan County Economic Development Commission and Miller Davis, $30,000 is allocated to the “connectors.” The total contract between the economic development group and Miller Davis, which includes services other than the blog site, is $80,000, with an additional $11,600 in in-kind services. Miller said the in-kind contribution is a reflection of the fact that he wanted to go “over and above” as a local business owner.

That $80,000 originally came from the Rowan County commissioners. It was allocated to the Economic Development Commission because, Edds said, it was more nimble than county government.

Edds, Dibley and Miller stressed that the project will not compete with news outlets. Articles posted on the site Saturday afternoon profiled a partnership between Henderson Independent School and the Center for the Faith and Arts; “hidden gems in Rowan County,” specifically Eagle Point Nature Preserve and Gold Hill Mines Historic Park; Rowan-Salisbury Schools’ “renewal” designation; tips and resources for better nutrition; a look at life on High Rock Lake; and an introduction of what’s to come in blog posts related to Rowan’s municipalities.

Miller, an original member of the Growing Rowan marketing subgroup, was chosen over five other firms — one of which was ChandlerThinks, the same company that completed the rebranding project for the county. Other submissions came from French/West/Vaughan in Raleigh; Clean, also based in Raleigh; High Tide Creative, based in New Bern; and RLF Communications, based in Greensboro.

Miller addressed questions about a conflict of interest by saying that, while he was involved in initial discussions about funding the marketing subgroup, the selection of his company was handled by a third-party consultant.

There’s no specific end date to the Your Rowan project. Miller Davis’ contract runs through August.