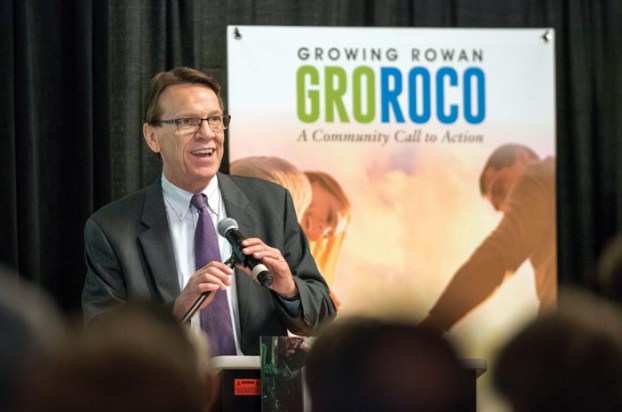 SALISBURY — With the help of about 200 participants, local leaders on Friday kicked off a project that aims to leverage Rowan County’s assets in new and innovative ways.

County commissioners Chairman Greg Edds, who developed the project, likens the goal to cooking a better meal with the same ingredients.

Friday’s gathering featured three speakers and the signing of a document known as the Rowan County Declaration of Interdependence.

“Everyone in this community knows that we could and should be doing better,” Edds said after Friday’s meeting. “It’s not like we’re sitting here with no assets. We know that we’re underperforming. So we’re trying to figure out how we use those assets to their full potential.”

He said the framework of Growing Rowan provides an opportunity that local residents have been craving to contribute constructively to improving the community.

Before participants split up into their subgroups, they heard speeches from Donnie Charleston, economic policy director at the Institute for Emerging Issues; Steve Chandler, the owner of branding firm Chandler Thinks; and Rod Crider, president of RowanWORKS Economic Development.

Charleston’s speech focused on the effect of technology on jobs and how demographics are changing in North Carolina and Rowan County.

He said technological advances will “fundamentally alter our economy.” He cited self-checkout lanes at stores such as Walmart as one example of how technology is disrupting the job market for cashiers.

On demographics, Charleston said the number of white residents of Rowan County dropped after the recession, the Hispanic population increased significantly in recent years and the African-American population also increased, which is dissimilar to the national trend.

Chandler spoke next. He focused on the importance of the role that local residents play in their community’s image. He used a hotel clerk as an example of a local resident whose opinion on local matters could be important to visitors.

Chandler said it’s the job of every resident of Rowan County to improve the area’s reputation. Promoting the county requires residents to enjoy living in their community, he said.

Crider wrapped up the list of three speakers. He spoke about assets in Rowan County that should generate optimism about the area’s future. Being connected to Charlotte via Interstate 85 is one example.

“One of the things any community needs is to be connected to a metropolitan area,” he said.

Without such a connection, Crider said, there is doubt that a community will be able to grow its economy. And location weighs heavily on businesses’ decisions to expand or relocate, he said.

Rowan County faces challenges — such as the ones Charleston spoke about — but they are not insurmountable, Crider said.

“I’m not dismissing them, but I think we can overcome those,” he said.

He said Rowan County needs a vision to be successful and it appears that vision exists among local leaders.

Crider ended with a quote from Vince Lombardi, one of the most successful professional football coaches ever.

As Crider wrapped up, Edds described the Declaration of Interdependence, which outlines a set of principles for elected officials. Edds and commissioners Vice Chairman Jim Greene have obtained support for the document from all municipalities in the county. On Friday, representatives of Rowan County cities and towns signed an enlarged version of the document.

The meeting wrapped up when participants split into eight subgroups, which will hold their own subsequent meetings. Participation in the subgroups requires members to meet for one hour per month, said Craig Lamb, vice president of continuing education at Rowan-Cabarrus Community College.

Lamb told the crowd that subgroups of Growing Rowan will be unlike other civic meetings where “we move little stickers around, we pat ourself on the back and go home.”

Another large gathering like the one Friday may be held in the future, Edds said.

FAITH — The town of Faith’s annual Fourth of July celebration will kick off its 71st year with a street dance... read more