Brad Hunter’s a popular choice for Love Thy Neighbor proceeds 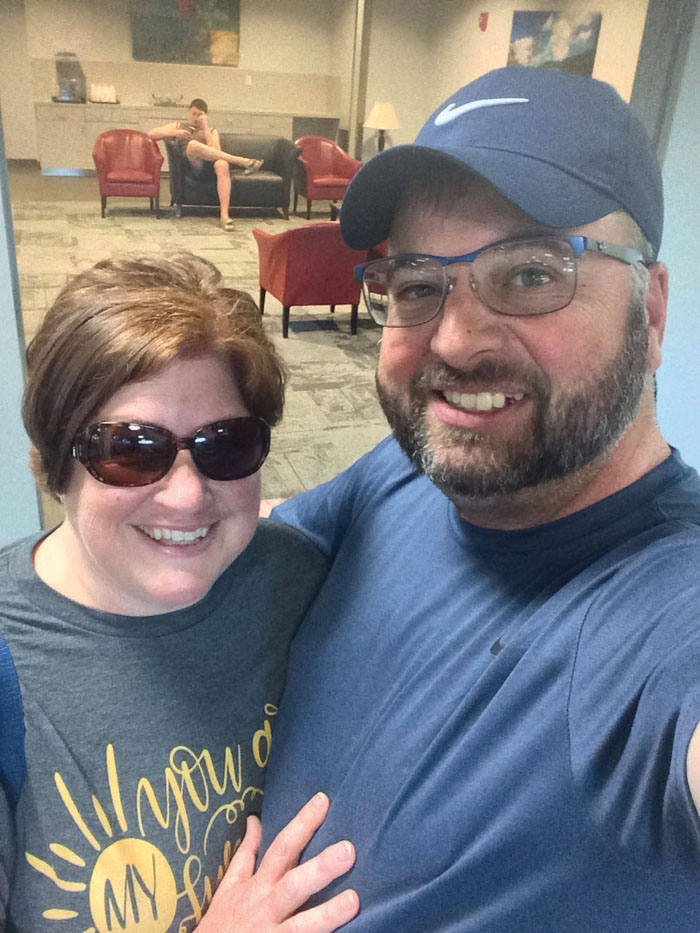 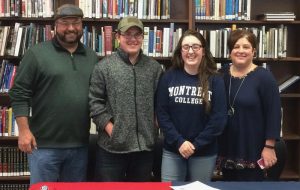 After making every other Wednesday chemotherapy visits to Wake Forest Baptist Hospital, Lynda Hunter said, “We usually go in very early and spend nearly all day there. One morning, Brad and I were among the first to walk in and found all the nurses holding hands in a circle and praying for their patients. That is just one of the endless blessings that we have received from minute one; our cup is overflowing!”
Brad Hunter has duodenal cancer, affecting the first and shortest part of his small intestine and preventing the complete digestion process and absorption of necessary minerals. His cancer is extremely rare with only 2.3 new cases per year out of 100,000 men and women. 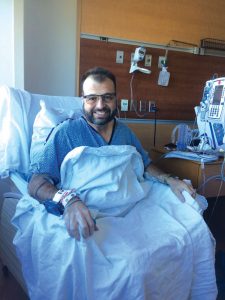 Brad  from his hospital bed at Wake Forest Baptist. Hunter has lost 65 pounds since his duodenal cancer was found. Photo by Lynda Hunter.

The same small committee returns to head up the sixth annual Love Thy Neighbor event, a partnership between Concordia and Trinity Lutheran Churches. Jason Ritchie, Crystal Karriker, Paula Sloop and Lorraine Nicely do the heavy lifting for one of the most successful fundraisers in the area, eclipsing $130,000 in the previous five events. On a recent Sunday afternoon, they discussed how quickly they decided on Brad Hunter as the recipient for the 2019 version.
Ritchie and Sloop both said they had someone in mind and were surprised to find that both wanted Brad, already familiar to Nicely as well. Ritchie said, “The Holy Spirit led us to his name.”
As an active member at First Reformed Church in Landis, Brad serves on the Consistory, the sound team and the security team. Brad works for the City of Concord as a signal technician and Lynda teaches at Millbridge Elementary. The Hunters have two children: 19-year-old Cierra, herself a cancer survivor of non-Hodgkin’s lymphoma, is a student at Appalachian State University; and 17-year-old Riley, who is headed for the US Army soon.
Lynda said, “Our church family has been wonderful through this. They have fed us, traveled with us and met all our needs.”
In August 2018, Brad went to the hospital with the expectation of routine gall bladder surgery. The surgery couldn’t be completed because a malignant tumor was wrapped around major arteries. The Hunters were referred to Baptist Hospital, and oncologist Dr. Rocha Lima hatched a plan to shrink the tumor with aggressive chemotherapy with hopes for surgical removal later. Rerouting the stomach was discussed, but since Brad was eating well, that didn’t seem necessary.
Things changed on Friday, October 12 when Brad was rushed to the emergency room at Baptist while throwing up blood. The tumor had grown and blocked the stomach completely, resulting in a 10-day stay in the hospital and surgery to reroute the stomach and gall bladder, plus the installation of a port for the chemotherapy. Brad started the chemo on November 7 and has been at it since.
Brad, now 48 years of age, is affected by a low energy level, cold sensitivity and his food doesn’t taste right. Another chemo drug is being added while problems with the spleen are a new focus.
Brad’s spleen has absorbed all his platelets and doctors plan to kill about 35 percent of it to increase the platelet count. Time at the hospital will increase to 10 hours each Wednesday, followed by two more days using a pump at home and back to the hospital for removal of the pump on Friday.
Positives, of which there are many, include recent signs that the chemo is working. Brad said, “There has been no new growth of the tumor and it appears that it may be dying. But we have to stay with the chemo, through July at least. We want the arteries clear to the spleen and liver.”

Meanwhile, Ritchie says, “We are networking the biggest group ever. The City of Concord wants to help, so does Millbridge Elementary and First Reformed. We hope to feed breakfast to 1,000 people that morning. As always, I am worried that we won’t have enough food or items for the silent auction. I know it will work out.”
Ritchie and Karriker head up 5K and 10K races that start at 9 a.m. and a fun run for kids at 10 a.m. Handmade awards go to the overall male and female winners in the 5K and 10K and there is a first place medal for both the male and female winners of the fun run. Russell Foster makes the awards and Atwell Fire Department keeps the race course safe. Runners don’t get shirts but they do get breakfast.
Nicely and Sloop are responsible for the silent auction, taking place from 7-11 a.m. Silent auction items can be dropped off at Ebenezer Lutheran and First Reformed Church. Breakfast, also from 7-11 a.m., is by donation. Alexander Ham provides the meats.
New this year is a raffle for a Browning Silver Field shotgun and a guided quail hunt at Tail Feather Preserve in Mount Ulla.
The Hunters will attend the March 16 festivities. Their 25th anniversary is June 11 and Lynda said, “Marriage is hard but our relationship has really grown through all this. We now pray for all those nurses and the patients we meet at Winston. John 1:16 says ‘From his fullness, we have all received grace upon grace.’ We are honored to be blessed by our community through the Love Thy Neighbor project.”
Meanwhile, Ritchie, Karriker, Sloop, Nicely and so many others keep going. Sloop said, “If you don’t let us help you, you’re denying us from sharing our own blessing.”
They plan another event on September 7 to help Jerek Cannon, who is suffering from a rare form of leukemia.

More information on the events can found on Facebook, by email at trinitylandis@gmail.com or concordia185@gmail.com and by calling Ritchie at 704-202-4975.
Follow Brad at www.caringbridge.org\visit\bradhunter