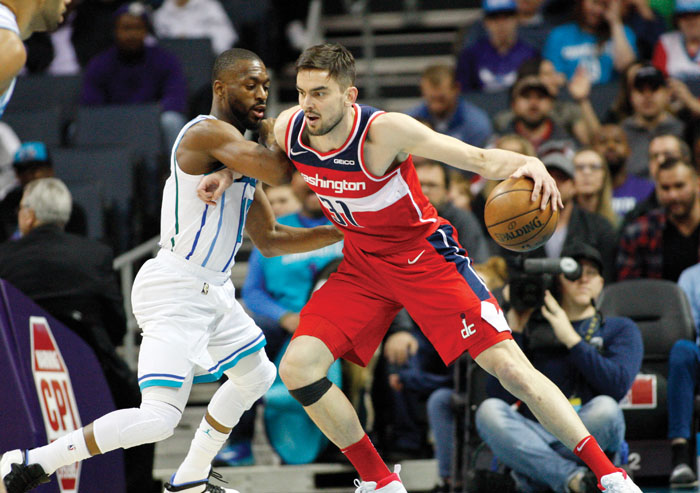 By STEVE REED AP Sports Writer
CHARLOTTE (AP) — Marvin Williams has spent the last couple of weeks encouraging his teammates not to give up, reminding them the playoffs are still a possibility despite a recent slump.
On Friday night, Williams backed up his words with his best game of the season.
The 32-year-old Williams poured in seven 3-pointers and finished with a season-high 30 points, helping the Hornets snap a five-game home losing streak with a 112-111 win over the Washington Wizards. It was three shy of his career high, set in 2008.
Williams was 7 of 10 from beyond the arc and had seven rebounds as the Hornets got a much needed win to remain in the hunt for the eighth spot in the Eastern Conference playoffs.
“If there’s anybody in that locker room that is pushing this thing and willing us through, it is Marvin,” Hornets coach James Borrego said. “He has great spirit about him, he’s got great will about him and he’s trying to push this team — and tonight was an example of that.”
Along with shooting 10 of 16 from the field, Williams had some big plays for the Hornets.
In the first half, he grabbed an offensive rebound and stuffed it home hard with one hand, bringing the crowd to its feet. A few minutes later, he added some big time help on the defensive end rejecting Beal on a drive to the hole.
“We are in a position where our season is on the line and I think everybody understands that,” Williams said. “All you can ask right now is to go out and give maximum effort.”
Jeremy Lamb had 19 points and 10 rebounds and made a go-ahead 3-pointer in transition with 50.9 seconds left, the 14th and final lead change of a nip-and-tuck game. Kemba Walker added 18 points for Charlotte but again struggled from the field shooting 6 of 19.
Bobby Portis had 23 points and nine rebounds for the Wizards, who have lost eight of their last 10.
“We’re all fighting for our playoff lives,” Wizards coach Scott Brooks said. “Great effort. We had a couple of good looks that didn’t go our way, didn’t fall for us, but good looks.”
After Lamb’s 3-pointer from the left wing, Bradley Beal missed a jumper on the other end. Portis grabbed the loose rebound, but was blocked in the low post by the smaller Lamb.
Portis screamed for a foul, but no call was made.
After a timeout by Charlotte, Walker appeared to rush a 26-footer from the top of the key and the Wizards grabbed the rebound and called timeout with 11 seconds left. On the ensuing inbounds pass, Beal drove from the corner to the lane, but his shot was altered by Dwayne Bacon and Nic Batum stripped Portis of the rebound to seal the win.
“I thought I got fouled, but I didn’t,” Beal said. “It’s just a tough one, tough shot. I probably should have got a better one. … I have to close it.”
TIP INS
Wizards: Portis had 28 first-half points against the Hornets earlier this year on this same court when he played for the Bulls. … Washington was outrebounded 52-45.
Hornets: Michael Kidd-Gilchrist saw his first action in four games, but it didn’t last long as he left in the second quarter with a left knee strain and did not return. … Charlotte shot 3 of 19 from 3-point range in the first half.
BACON COOKING
Bacon has been bouncing between the Hornets and the G League, but played a pivotal role for the Hornets after Kidd-Gilchrist went down. He played 14 minutes and had 10 points and three assists and was in on the final defensive stop against Beal.
“There is no doubt in my mind that I can play at an NBA level,” Bacon said. “I come in and I work every day and they’ve been telling me all year, ‘Just wait, just wait until your number is called.’ I came in and helped tremendously and that’s all I want to do.”
ROLE PLAYING
Portis said despite the loss, players are beginning to grasp their roles.
“Obviously, I feel like we played at a high level,” Portis said. “Our team is really gelling over the last four or five games. We’re knowing our niche now, finding our role, what we can do to help the team be successful. I think everybody is playing their role really well.”
UP NEXT
Wizards: Visit Timberwolves on Saturday night before returning for a five-game homestand.
Hornets: Visit Bucks on Saturday night, the first of four straight road games.
___
More AP NBA: https://apnews.com/NBA and https://twitter.com/AP_Sports