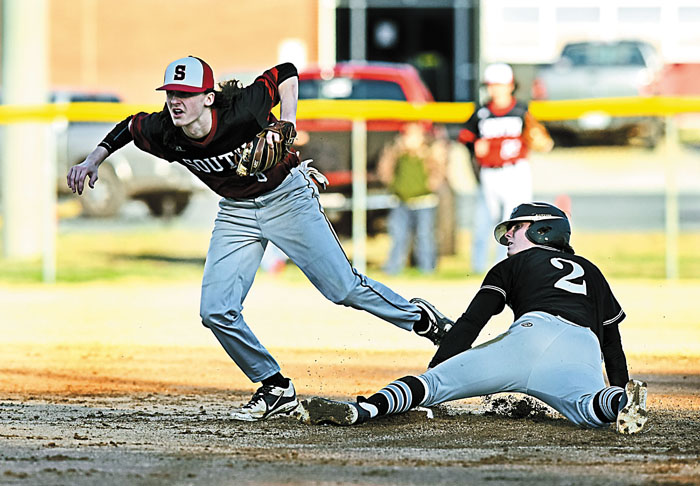 Wayne Hinshaw file photo/for the Salisbury Post ... South Rowan’s Bryson Bebber, left, looks to the umpire after trying to force Ledford’s Noah Soles (2) at second base, during a game from last season.

Playoffs: Did not make the state playoffs. ending an eight-year streak

The Raiders have inexperienced pitching, but Chrismon is genuinely excited about the possibilities for this team.

“It’s a pretty athletic bunch — we’ve got guys who can run and hopefully pressure teams into mistakes,” Chrismon said. “I like our lineup and I believe we’ll be better defensively. I also like our focus. This group practices hard.”

South has a solid core to build a lineup around. Sturdy catcher Jarrid Nelson (.302, 16 RBIs) could be one of the county’s top players. He was first team all-county as a junior.

Jones, a three-sport athlete for the Raiders, can run balls down in center field and swings a productive bat. Bebber, a ,333 hitter a year ago, played all over the place in 2018, but the plan is for him to be the full-time third baseman this time.

Nelson, Jones and Bebber probably will be the 3-4-5  hitters for the Raiders and should produce their share of RBIs.

Jack Weaver, a sophomore, is being counted on to fill the hole at first base.

South shouldn’t have any worries behind the plate with Nelson — or in the outfield where left fielder Drew Huffman, the football team’s scrambling quarterback, and returning right fielder Kory Moss are expected to flank Jones.

The question mark is pitching, as South lost the top four arms from a 10-13 team.

“Eli Hiskey hasn’t pitched a lot for us, but we believe he can give us good innings,” Coach Chrismon said. “We’ll need Nelson’s arm on the mound some this year. Sophomores Weaver and Luke Hiskey will pitch, and we’ll also get innings from guys like Andrew Furr, Moss and Huffman.”

Nolan Eudy and Hunter Parrish are lefty swingers and throwers moving up from the jayvee team.

Another name to know on South’s 14-man roster is catcher Drew Watkins. When Nelson pitches, Watkins will be the guy stepping in behind the plate. Chrismon likes his bat.

South has usually been good under Chrismon, has frequently over-achieved, and had six winning seasons in a row before dropping off a bit in 2018 and failing to make the state playoffs for the first time since 2009, Chrismon’s first year as head coach.

“We’ve got to find our identity, but I hope that identity will be as a scrappy team,” Chrismon said. “Pitching is the key for us. We can’t walk a lot of guys. We can’t give our opponents first base. If we can limit the walks, I think we can surprise a few people.”

Brett Stirewalt is back at South and serves as Chrismon’s top assistant. Grayson Miller, the former Northwest Cabarrus catcher, is coaching the jayvee team.

SAC Tournament: Catawba rolls to first round win at…