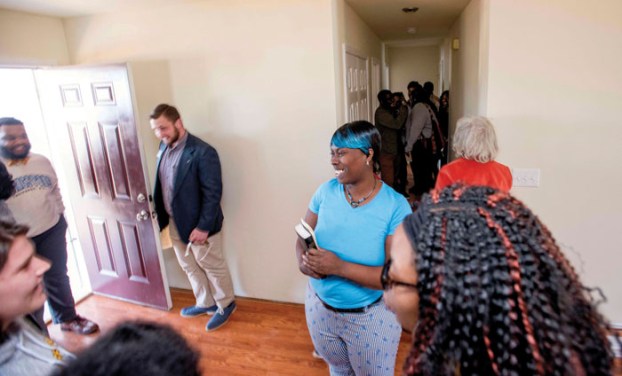 New homeowner Nyesha Patterson is all smiles after seeing the inside of her new home. Jon C. Lakey/Salisbury Post

1. While construction continues on an Interstate 85 interchange in the Old Beatty Ford Road area of southern Rowan County, talk has surfaced about the possibility of a new I-85 interchange in Rowan. Where would it be?
A. Between Peach Orchard and Julian roads
B. Between Webb and Peeler roads
C. Between the Yadkin River and Long Ferry Road
D. Between Exits 76 and 79 at McCanless Road and Correll Street in East Spencer

2. After years of battling diabetes and taking medications to control the disease, Tom McDaniel needs a kidney transplant, and his family is conducting a public search for a donor. McDaniel is well-known through his work with what city of Salisbury department?
A. Salisbury Transit
B. Fire Department
C. Parks and Recreation
D. Police Department

3. Meredith Williams, Myles Cannon and Ola Nwafor received Elizabeth Duncan Koontz Humanitarian Awards during an annual ceremony Thursday night at the Salisbury Civic Center. Who was Koontz?
A. A nationally recognized figure in education, civil rights and women’s rights
B. Longtime president of the American Red Cross
C. Longtime principal of Koontz Elementary School, which now bears her name
D. A longtime Salisbury merchant whose store in the old Dixonville community was a famous gathering place

4. The Rowan-Salisbury Board of Education has discussed establishing a career and technical education high school. It would cost an estimated $9 million to adapt an existing school for that purpose. What school does the board have in mind?
A. North Rowan High School
B. Henderson Independent High
C. Koontz Elementary
D. Knox Middle School

5. Why was N.C. Gov. Roy Cooper in Kannapolis on Tuesday?
A. To recognize A.L. Brown High School as one of the state’s five “Schools of the Future”
B. Appearing at the N.C. Research Campus, he announced a $400,000 NCWorks Local Innovation Fund grant for a Rowan-Cabarrus Community College program.
C. He joined Kannapolis city, Rowan County and Cabarrus County officials to turn over the first blades of dirt in a ceremonial groundbreaking for a new minor league baseball stadium.
D. He was on hand to announce the expansion of Duke University’s program at the Research Campus, meaning the addition of 230 jobs.

6. Salisbury’s Jim Taylor and his 23-year-old son, Khalil, recently spent considerable time in Taylor’s garage building something together out of wood. What?
A. A one-man glider
B. A sailboat
C. A Soapbox Derby car for Taylor’s grandson
D. A kayak

7. World War II veteran Bertha Harrison Dupre died in December and her unclaimed body was cremated in January, but she will be honored in a special way March 22. How?
A. She will be inducted into the N.C. Veterans Hall of Fame.
B. The VFW Post in Rockwell will be named in her honor.
C. Lyerly Street in Granite Quarry will be renamed Bertha H. Dupre Street.
D. A procession will carry her ashes from Rockwell to Salisbury, where a service with full military rites will take place at the National Cemetery.

8. A Superior Court judge recently ruled the N.C. General Assembly should not have asked voters to decide on constitutional amendments related to voter ID and limiting income tax rates in last November’s election. Which of the following statements is not true about Rowan County legislators’ reaction to the judge’s ruling that the voter-approved amendments are illegal?
A. Reps. Harry Warren, Julia Howard and Larry Pittman and Sen. Carl Ford all disagreed with the ruling and said it ignores the will of a majority of N.C. voters.
B. Warren and Pittman support the ruling.
C. Ford, a Republican, said he had expected the amendments to be struck down because Democrats always planned to tie up the issue in court.
D. Howard said the judge overstepped his authority.

9. Rowan-Cabarrus Community College, which already has a strong program for firefighter and emergency worker training, broke ground Monday for what related to that program?
A. A five-story training tower
B. A replica fire station for practicing faster departures and backing firetrucks into service bays
C. An air-pack recharging station
D. An obstacle course for rookie firefighters

SALISBURY — The March issue of Salisbury the Magazine covers everything from a French boxcar to a NASCAR tire specialist,... read more