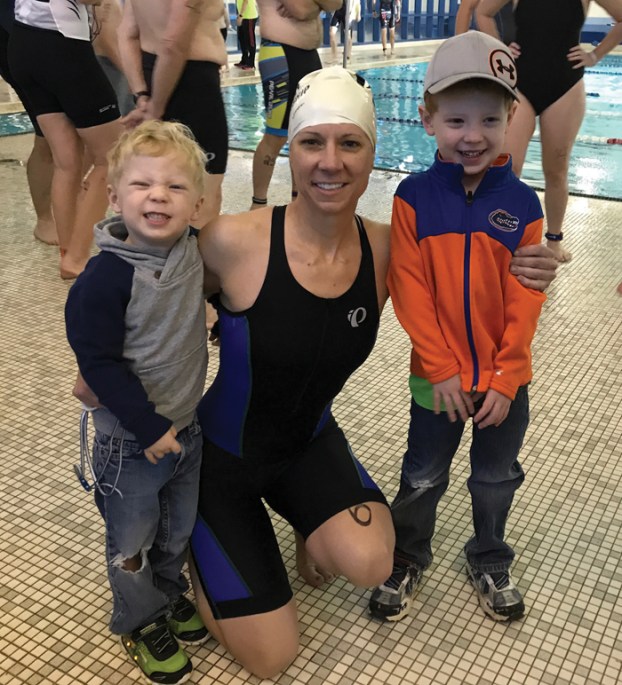 I can’t remember the first time that I met Delaine Fowler but I’m glad it happened. She’s a Doctor of Physical Therapy and owns Accelerate Therapy and Performance, from where she has fixed various ailments for me. But in return, I got to coach one of the best and most determined athletes in Salisbury. Delaine and her husband, Alan, were recently blessed with their third son. Delaine just celebrated her first run after a pregnancy that was tougher than the others.
Recapping her successes so far, Delaine said, “Running relatively injury-free for 20 years is probably my biggest success. Other than when pregnant, I have consistently trained for triathlons, week in and week out. Part of my success in my late 20s and 30s came from a variable training plan with running, swimming and biking all done at least three days a week. I almost never miss a workout and add in some strength training two days a week. I just like to push myself and leave knowing that I gave my best effort.”
In the NC Triathlon Series, Delaine at age 39 ranks in the top 10-15 percent of her age group in the USA Triathlon Association. She is one of the few local women runners to break 20 minutes in a 5K road race.
I asked how pregnancies have affected her body and training. Delaine said, “Each pregnancy has been different. Whitt, my most recent, was the hardest. Fatigue was my biggest complaint. At 17 weeks, I started getting dizzy while jogging, so I gave that up. I gave up spin class around 24 weeks and swimming at 30 weeks. With the first two kids, I swam all the way up to when they came. I stretched a lot and walked as much as I could toward the end of carrying Whitt. I feel great now that he has arrived and have started swimming and running again without any issues.” 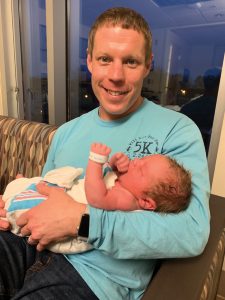 The following answer surprised me. I had asked, “How competitive are you and how do you balance this with your pregnancies? What goes on in your mind when you can’t train?” Delaine responded, “My friends will probably roll their eyes when they read this, but I am not that competitive with other people. I like to look at past results and see if I can improve upon them. When pregnant, I am mindful to listen to my body. If I have to miss running while building a baby, that gives me joy too. I gave up racing with all of my pregnancies but always put a triathlon on my calendar after each birth just to have a goal.”
Delaine recapped one of the most amazing after-pregnancy comebacks I have seen. She said, “I had an emergency C-section with Brady. A C-section slows you down way more than natural child birth. But with the encouragement of a good buddy, I decided to do the Badin Triathlon a month after Brady. Don’t do this without time to heal after the most energy intensive thing a woman can do. My OB would not have been happy, but I survived. I’m famous in Badin for racing so soon after the birth. That makes me laugh!”
Delaine’s after-pregnancy goals include:
Getting functional strength and cardiovascular stamina back.
Race the Buck Hurley Triathlon in May.
Compete in a few sprint tri’s and 5Ks this summer and fall.
Run a half marathon in late 2019 or early 2020.
Be in awesome shape this time next year with bigger goals in 2020 and beyond.
The Fowler family started with Brady, now six years old. Delaine remembered, “The moment Alan and I heard him cry, our hearts grew even bigger. My buddy Lynn Bertram told me “You have no idea how much God loves you until you have a child.” That was very true when Brady entered our lives. Pace is five years old. We have not had a dull moment since his birth because he’s just like his mother, too busy and always into something. Whitt is two weeks old. He is a perfectly laid-back newborn at the moment. I hope he stays this way for the flow of our family. After being married 12 years, I love having a spouse, also a triathlete, who pushes me to be a better person every day. He understands the power of being healthy. Staying active together as a family is central to our lives.”
The next beginning runner’s class kicks off on March 12. Find it and other events at www.salisburyrowanrunners.org

March Saturdays are full of activities for children

By Hope Loman Rowan Public Library Looking for something new for the kids to do on weekends? Trying to save... read more