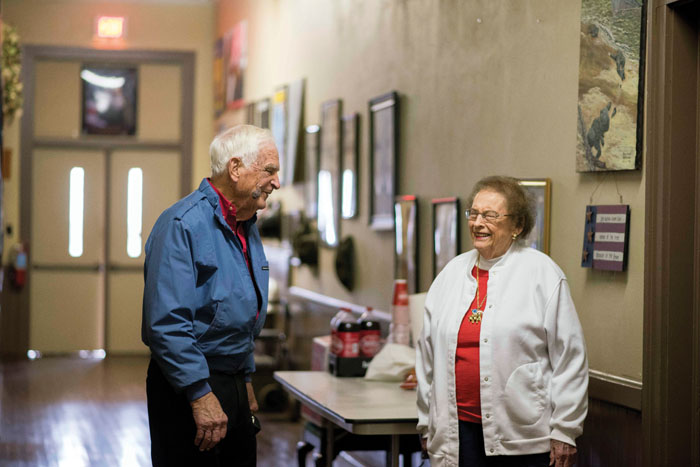 Ollie McKnight (right) talks with Bobby Mault at the Price of Freedom Museum. McKnight attended the Patterson School on Weaver Road as a youth in the late 1930s. JON C. LAKEY / SALISBURY POST

The year was 1936, set firmly in the Great Depression. At just 5 years old, Ollie Patterson lined up for her first day at the new Patterson School on Weaver Road. She had walked to school with a sister and brother and waited outside until a bell rang to begin the school day. Ollie, unsure and quite apprehensive, walked into the first grade and joined about 100 students that September day for grades 1-8. 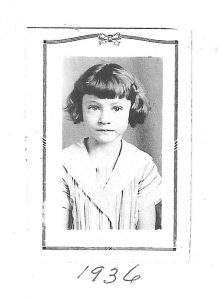 A 1936 photograph of Ollie McKnight from the 1st grade.
SUBMITTED PHOTO

Today, Ollie Patterson McKnight remembers that day vividly. Now 83 years later, she gets plenty of opportunity to rekindle other memories of the school while serving as a regular volunteer for Patterson School’s renewed purpose, the Price of Freedom Museum. All Rowan County fifth graders and various other groups visit the museum by appointment during the week and while regularly open on Sunday afternoons. Bob Mault, founder of the museum in 2006, said, “We’ve been trying to find a good way to honor Miss Ollie. She serves refreshments and helps with a scavenger hunt, always able to keep the kids in line and is the best at encouraging me.” 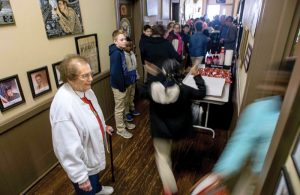 The previous Patterson School was located about a mile away near the corner of Patterson and the dirt part of Cooper Road. The new school was named for Ollie’s great uncle, Dewitt Patterson, largely for his gift of the land. The big bell on the water tower rang for real that first day with just six teachers, one of them serving as principal too.

Ollie’s first grade teacher was Mrs. Mary Deal. Ollie said, “I was one of youngest and was so bashful. I didn’t have the confidence to make friends then. We sat at tables and didn’t have desks. There were about 20 students in my class. Each day started with the Pledge of Allegiance and devotions, usually followed by a Bible story.”

Fun times made for great memories as the school years passed by. Ollie recalled, “If the teacher was out of the classroom, we went to the back of the room behind the coat partition and played on the bars. We always had a lookout and were back in our seats when she reentered the room. I loved going to the auditorium. We had plays, singing and movies. We were supposed to pay five cents per movie but usually those who couldn’t afford it got to quietly attend. If it was raining outside, we also used the auditorium before the morning bell and while waiting for school to dismiss.”

Recess was Ollie’s favorite time of day. She added, “We played double dutch jump rope, tag, marbles, giant steps, red rover, dodge ball, softball and lots of made up games. The whole school went out to the playground and played for a half hour while the teachers went back inside to catch up on their work. When the big bell rang, everyone ran back into the school. Once, I got to ring the bell which was a great thrill!”

Lunch was another favorite time. Ollie and her siblings often brought ham sandwiches and enjoyed trading with other students for something that they didn’t usually get at home. During those early years, the students ate in their classroom before a lunchroom and stand-alone cafeteria were added later. Ollie remembers her embarrassment from a rule broken one day. She said, “I was still chewing past the time we were supposed to be done with a snack. The teacher made me sit in the corner. Nothing like that happened again. I don’t remember anyone in my class ever getting paddled.”

One special memory occurred near Valentine’s Day when Ollie grew tired during recess and sat down on the school steps. Jimmy Miller came over and gave her a store-bought Valentine. Ollie said, “He had written ‘I Love You’. I was thrilled to get it! Jimmy, Frank Patterson and George Basinger were the only other students from that first grade who remained with me on through high school. I’m the last of the group.” Ollie also looked forward to annual special events like Fall Festival and the Maypole Dance.

After completing high school with the first 12th grade class at Farm Life School in China Grove, Ollie went to Lenoir Rhyne College where she played every sport available. Ollie was voted by the student body as “Miss Lenoir Rhyne” in 1951. She also served as May Day attendant and performed in the A Capella Choir. Another favorite memory was serving as a waitress in the dining hall. 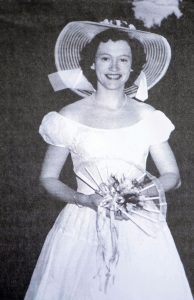 Graduation in 1952 sent Ollie into her teaching career in fourth grade at Shady Brook and Jackson Park Elementary Schools in Kannapolis through 1956. Sons, Eric and Carl, were born to Ollie and husband, John. Ollie said, “Back then, a teacher had to go on leave once the pregnancy began to show.”

Ready to return to work, Ollie moved on to teach at China Grove Elementary until 1987 and retirement. Another three years of substitute teaching totaled 36 years in the classroom. Ollie remembered, “I had 39 students the first year of teaching and usually had 32-36. Cooperation from the parents who helped out with activities and any behavior issues was a real blessing.” 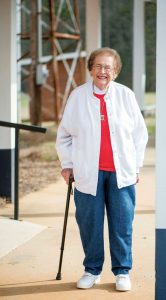 Glad to have found her place at the Price of Freedom Museum, Ollie, now 88 years of age, said, “Volunteering here has helped me find my joy and love for children again. I’ve come full circle. God has allowed me so many blessings through my life and now another for the privilege of working with these kids and talking about our veterans. Who knows how much longer I’ll get to do this, but every day here is just so enjoyable!”

For more information on the museum, see www.priceoffreedom.us