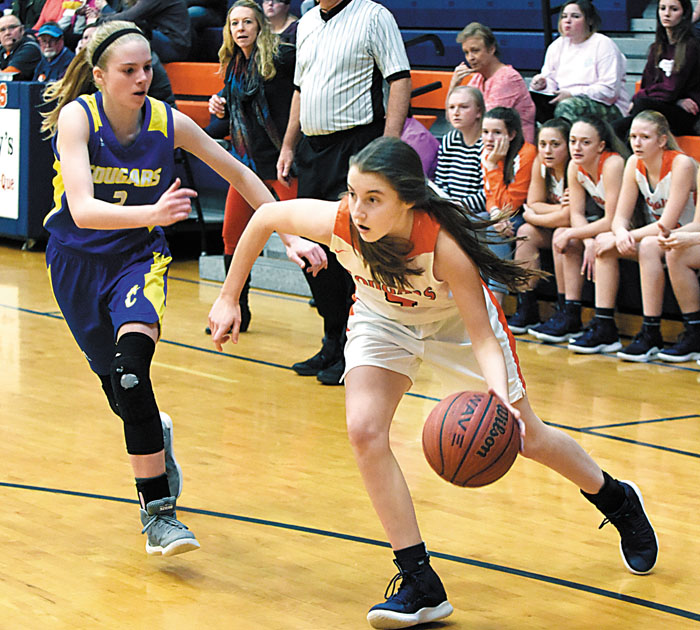 The Cougars (26-2) used a stifling 3-2 zone defense and timely three-point bombs to rack up a 26-7 run in the third period to win the second round battle in the state 3A playoffs.

SW Randolph (20-7), out of the Mid-Piedmont 3A, turned a sure rout into a more respectable 12-point final margin with a 29-point fourth quarter, but the deficit was too much to overcome.

“We turned up our defensive pressure and got some stops and steals” said Cougars’ senior star McKenzie Gadson, of the decisive third quarter. “It was pretty much our defense that made the difference because when we get steals it feeds our offense.”

Gadson poured in 25 points to go with seven rebounds and six timely steals to lead the winners. She finished well above her 14.1 average and now has more than 1,400 career points.

The game started in a completely different fashion as the two teams battled through nine lead changes and four ties. The score was knotted at 19-19 when Carson went on a 10-0 run in the final two minutes of the first half to gain some breathing room.

A couple of steals and layups by Gadson, plus a big 3-pointer by freshman Hannah Isley led the surge that gave Carson a 29-22 halftime margin.

“We talked at halftime about how important it was to get off to a good start in the second half,” said Carson head coach Brooke Stouder, “and we did just that. We knocked down a few threes, which always helps, but we got after it with our press. I just thought we did a really good job on both ends of the court.”

“Those threes were important because I feel like when we are making those shots, we are a much better team,” said Perry, who finished with 13 points, including a trio of 3-pointers. “We just tried to play active defense and not let them get in the middle.”

SW Randolph refused to accept the lopsided outcome as they posted 29 points in the final quarter to get within 10 at 68-58, in the final minute. But it was too little, too late. The visiting Cougars hit three treys in the final two minutes while Carson was missing five free throws in a row to allow the margin to shrink.

“We have got to finish better in the fourth quarter … missing all those free throws,” noted Stouder. “But give them (SW Randolph) a lot of credit because they didn’t quit. They kept playing hard. ”

Following Gadson and Perry in the scoring was Cooper with 11 points, followed by Hannah Isley and Ellie Wilhelm with seven each. Southwestern Randolph was topped by junior guard Heaven Maness with 20 points, Sarah Crews with 14 and senior Kenzie Whitson with nine.

Carson, seeded No. 3 in the 3A West bracket, will be back at home this Saturday night at 6:00 — a third-round contest against Charlotte Catholic (22-7). Catholic, seeded 11th, knocked off South Piedmont Conference champion Central Cabarrus last night, 44-40. Charlotte Catholic was regular season co-champions in the Southern Carolina 3A conference.

“At this point in the playoffs, every team is good and every game will be difficult,” Stouder said.