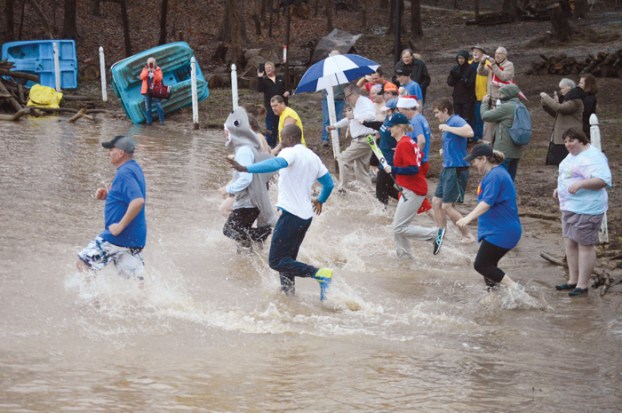 Josh Bergeron / Salisbury Post - A faithful group of polar plungers run into 50-degree water Saturday at the annual Rowan County Special Olympics Polar Plunge fundraiser at Elks River Park. There were 17 participants in the event, which raised nearly $4,000 for the Special Olympics.

Among the crowd taking the plunge were Salisbury Civitan Club President Bill Bucher, wearing slacks, a dress shirt and tie as if he had just finished a business meeting; Mark Lyerly, dressed as Santa Claus and saying he was early for Christmas 2019 rather than late for Christmas 2018; first-time plungers Tracy and John McMillin; Shela Sapp, who took a dive into the cold lake water on her way out; and Patrick Shealey, who helped pulled Sapp up.

“It’s an opportunity for the general public to get involved,” Byrd said about the event.

This year was the sixth for the Polar Plunge but the first time Byrd had jumped into High Rock Lake with other plungers.

Usually, Byrd said, he’s too busy handling logistics of the event to participate in the Polar Plunge, but this year a fundraising effort on his behalf, which generated $285, convinced him to participate. 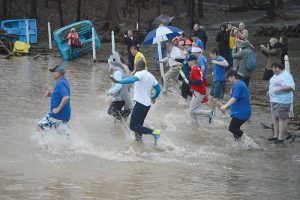 Josh Bergeron / Salisbury Post – A faithful group of polar plungers run into 50-degree water Saturday at the annual Rowan County Special Olympics Polar Plunge fundraiser at Elks River Park. There were 17 participants in the event, which raised nearly $4,000 for the Special Olympics.

Tracy and John McMillin said their first time participating was motivated by the benefit for a good cause and that it was a fun thing to do. Though, Tracy McMillin, who dressed as a baseball player, admitted she was a bit nervous about the cold water. John McMillin, who dressed in a shark costume, said they, like many others on Saturday, brought a spare, dry change of clothes.

“We came as prepared as we could,” John McMillin said.

Following the plunge, Lyerly received an award or raising the most of any individual at $150.

It was the second year in a row that Lyerly was the top individual fundraiser.

Rowan-Cabarrus Community College raised $325 and received an award for for raising the most money of any school. RCCC also had the most plungers of any school.

Dad and son build a kayak: ‘I’ve learned some things about working with my dad’

By Maggie Blackwell for the Salisbury Post The bones of the kayak span the garage; the easternmost end extends beyond,... read more