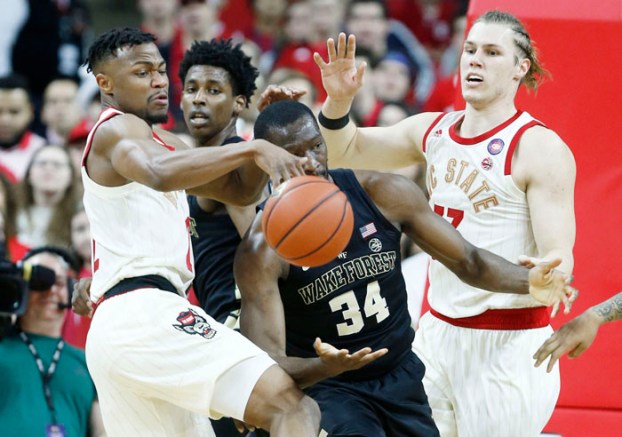 RALEIGH (AP) — This time, North Carolina State had Markell Johnson.
Johnson scored 25 points to help the Wolfpack beat Wake Forest 94-74 on Sunday, avenging last month’s road loss that came with Johnson sidelined by injury.
The 6-foot-1 junior had 19 points and five 3-pointers by halftime on the way to a 9-for-13 shooting day that included making career-high 6 of 9 3s for the Wolfpack (20-8, 8-7 Atlantic Coast Conference). He also had six rebounds, three assists and no turnovers in 30 minutes in a performance that coach Kevin Keatts described as “locked in” — and that helped keep N.C. State a step (or more) ahead of the Demon Deacons all evening.
“It was just his game,” sophomore teammate Braxton Beverly said. “He’s capable of doing that. He’s so unselfish, he don’t do it much because he always likes to get people involved.”
Yet N.C. State was happy to lean on Johnson in that first half, when he had more baskets (seven) than his teammates combined (six). And of course, it was good to have him at all for this matchup in the longtime instate series against the Demon Deacons (10-16, 3-11).
Johnson missed that 71-67 loss on Jan. 15 after taking a hard fall during a win against Pittsburgh, the first of three straight missed games.
“I just wanted to step up for my teammates and give that presence they didn’t have (in the first meeting),” Johnson said.
Johnson had been up and down in the weeks since, cracking double figures in only four of eight games while shooting 24 of 63 (.381) along the way. On Sunday, he had the best scoring total of his career in an ACC game.
“Once a guy gets going,” Wake Forest coach Danny Manning said, “it’s hard to slow him down.”

BIG PICTURE
Wake Forest: The Demon Deacons were coming off their first road win of the season (Tuesday at Notre Dame) and trying to win consecutive league road games for the first time since 2009. They were also trying to replicate one of their few highlights of their league schedule, when they led that then-ranked Wolfpack team by 22 points before having to hang on for the win. But a week after falling behind 18-0 in against No. 8 North Carolina, Wake Forest trailed 9-0 in the first 2½ minutes and never led.
N.C. State: N.C. State is still building up an NCAA Tournament resume that features few noteworthy wins but also with the January defeat to Wake Forest standing as the only bad stumble. This game was more about avoiding a loss that could do greater harm to its resume than a win could help.
“Hopefully (20 wins) is enough to get us in,” said Torin Dorn, who had 13 points. “But we’ve got a couple more games to play to build on our resume and put ourselves in the best position come March.”

SHAKY D
Wake Forest has surrendered at least 94 points in two of its last three games. The other was last weekend’s 95-57 loss to the Tar Heels in Wake Forest’s worst defeat in its Joel Coliseum home of nearly three decades.
“We were there and in front of (Johnson) but we didn’t take away airspace, and he was able to rise up and make shots,” Manning said. “And we’d contest after the fact. That’s pretty good defense on an average player. He’s not an average player.”

TIP-INS
Freshman Jaylen Hoard had 17 points to lead Wake Forest, which shot just 38 percent. … N.C. State shot 46 percent and finished with a 47-37 rebounding advantage. … Wake Forest’s rebounding struggles could be attributed at least partly to the absence of starting big man Olivier Sarr, who was out with an ankle injury. … Jericole Hellems added 14 points off the bench for N.C. State.

UP NEXT
Wake Forest: The Demon Deacons host Miami on Tuesday night.
N.C. State: There are a few days off for the Wolfpack before visiting No. 16 Florida State on March 2.

HAMPTON, Ga. (AP) — Brad Keselowski had his hands full with a new car and a new rules package —... read more